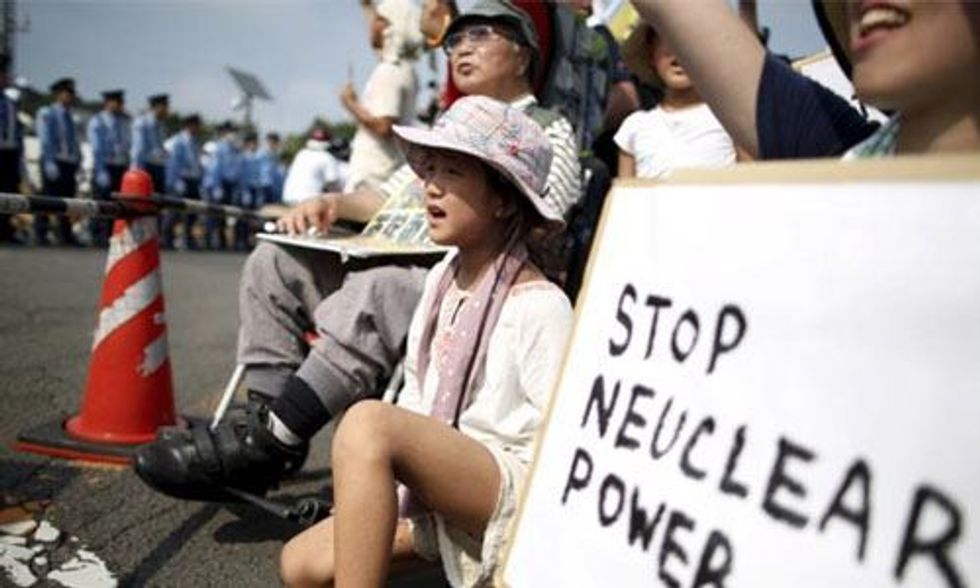 Japan has restarted its first nuclear reactor to generate power since 2013. And that's really bad news.

Remember what happened in 2013? Why Japan closed all of its reactors abruptly and why we're still tracing the spread of radioactive material across our Pacific Coast and into the atmosphere?

First there was an earthquake that did significant damage to that island country—and then a tsunami quickly followed. And what happened next was the largest nuclear meltdown in the history of the world and the evacuation of 160,000 locals who lived in the area of the Fukushima power plant. We know now that Tepco—the owner of the Fukushima plant—had been warned years earlier about the dangers of an earthquake and a tsunami hitting the plant. No one did anything about it then—but even if they had—do we have any reason to believe it would have been enough? Because that's the gamble that the Japanese nuclear industry is making with all of our futures right now. The simple fact about nuclear power generation—is that the risks and the costs dramatically outweigh any benefit. We've seen some of the risks—in Chernobyl we saw how human error can cause a meltdown. In the Three Mile Island incident we saw how the private corporations aren't afraid to cut corners to pad their bottom line—even if that risks a partial nuclear meltdown. And in Fukushima we saw what happens when corporate negligence meets a natural disaster.

Considering nuclear power's track record and the staggering risks involved—it's amazing that anyone will insure the projects—and the simple fact is that without government backing, like the Price-Anderson Act here in the U.S., nuclear power would be impossible, because no private insurance company will cover them.

And to add insult to injury, nuclear power is actually not an "alternative energy" source—it's an incredibly fossil fuel intensive process.

We can start with how much cement is required to contain and protect the reactors and other sensitive parts of the plants. Cement and concrete are hugely greenhouse gas intensive to produce—and the only way we know how to protect our power plants is to use more concrete.

The reality is that there are economically viable and truly clean energy alternatives—geothermal, solar, wind and tidal wave power are all options for Japan, for example. And they're options that have none of the risks and none of the costs associated with enriched radioactive material. And bringing those renewable options online isn't nearly as costly in terms of carbon as it is to bring a nuclear power plant online.

The reality is—the only reason anyone wants to bring these power plants back online is that when for-profit companies like TEPCO run nuclear power with massive government subsidies and insurance, it can be hugely profitable.

Nuclear is not a bridge fuel—it is not a clean alternative—and it can't be our future. In the 1940's scientists marveled at the idea of using fission to safely create large amounts of energy indefinitely—and they were wrong.

The only reason we're clinging to that fantasy today is that the for-profit nuclear owners—think Montgomery Burns from the Simpsons—don't care about the costs of nuclear power to society.

They'll happily sell the future of life on Earth—just to make a buck today. Which is why both Japan and the U.S. should "just say no" to nuclear power.