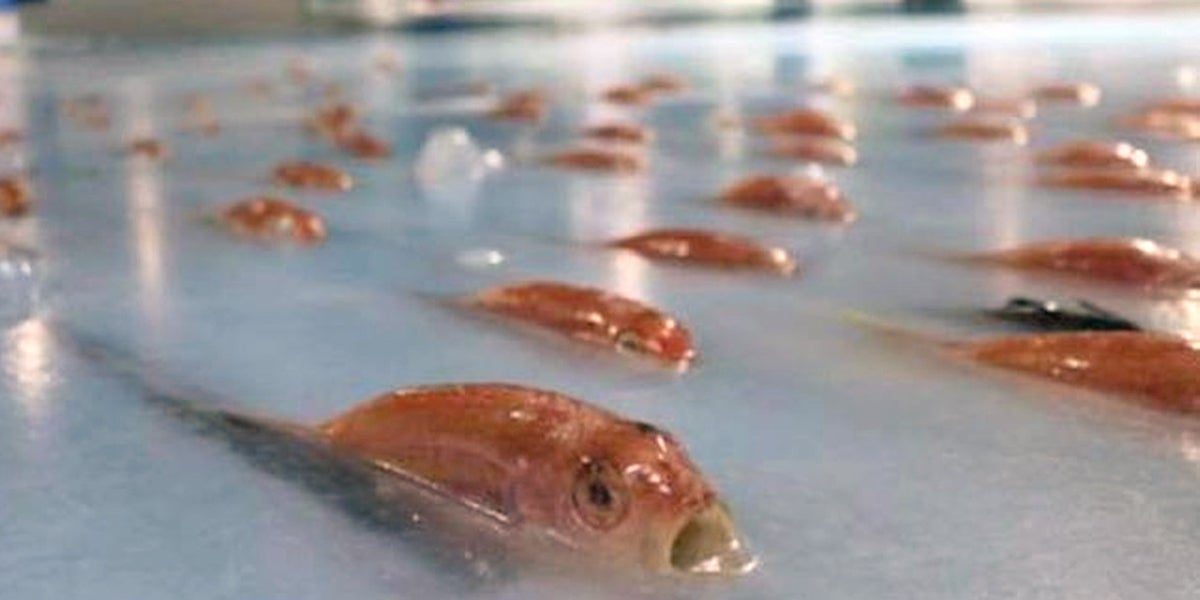 According to the Tokyo Reporter, the spectacle was part a limited winter and spring exhibition called “Freezing Port” that opened Nov. 12.

The park said that the point of the attraction was to allow visitors to skate above fish, shellfish and other marine animals in different oceanic zones.

“We wanted customers to experience the feeling of skating on the sea, but after receiving criticism, we decided that we could not operate it any more,” Space World general manager Toshimi Takeda told AFP.

Space World shut the attraction down on Sunday following the flood of criticism and is now melting the rink, a process that will take about a week. The park will also hold a memorial service for the fish.

The exhibition was touted as “not only a Japan-first, but undeniably a world-first.” The theme park started posting preview photos of its fish-filled ice rink onto its social media pages last month.

The photos, especially ones of larger creatures such as whale sharks and rays, sparked online fervor. One particularly incendiary image showed half-frozen fish with a caption that read, “I’m d..d..drowning…It h…h..hurts…”

Japan skating rink that froze 5,000 dead fish into the ice as visitor attraction has been forced to close https://t.co/nc5udlHaZS pic.twitter.com/efD0jwW6y1

Commenters condemned the attraction, with one saying that Space World should not “make life into a toy.”

However, a park official said that live fish were not used and that the photos of the larger sea creatures were not real.

“The real fish we used were provided wholesale from public fish markets, and these fish sellers are all aware of the purpose of this project,” the official told Tokyo Reporter. “Many of these fish don’t meet standards for selling to customers. And the big fish like whale sharks, sharks, and rays aren’t real, they’re simply photos that were blown up and embedded in the ice.”

As for the “drowning” caption, the official said that a park employee wrote it “hoping people would find it funny,” but added, “I do feel that not enough caution was taken. I apologize.”

“We received critical voices saying it is not good to use creatures as a toy, and that it is bad to let food go to waste,” Space World spokesman Koji Shibata told AFP.

Let’s also note that global fish stocks are currently being depleted at unsustainable rates and we are on the brink of running out of fish. The United Nations Food and Agriculture Organization revealed this summer that due to vast overfishing, nearly 90 percent of global fish stocks are either fully fished or overfished.