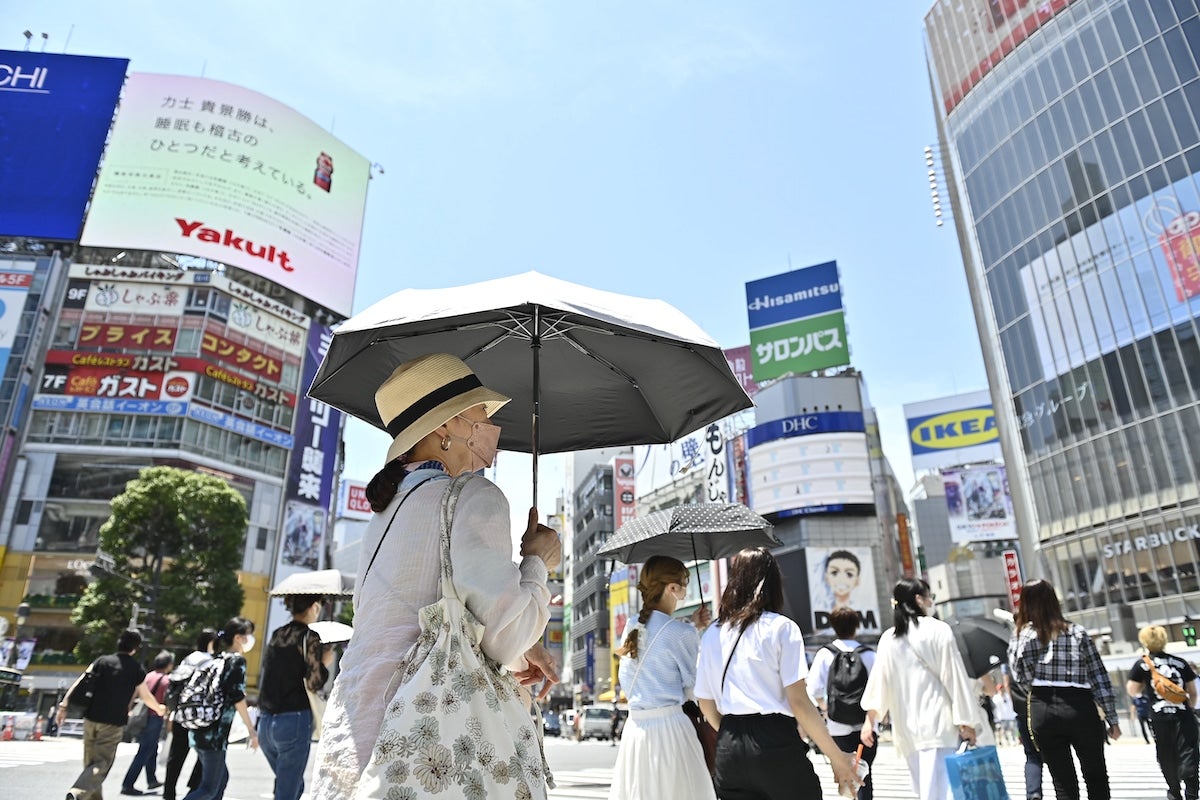 People walking in Tokyo's Shibuya district with umbrellas to protect themselves from the sun on June 27, 2022. David Mareuil / Anadolu Agency via Getty Images

June in the Northern Hemisphere has been sweltering so far, with every continent setting high temperature records. Japan set a record for the month on Saturday when the city of Isesaki reached 104.4 degrees Fahrenheit, reported The Washington Post.

In what is likely another example of human-caused climate change, Japan officially declared an end to the rainy season in the Kanto region ⁠— which encompasses Tokyo ⁠— 22 days early on Monday, The Guardian reported. It was the earliest since the Japan Meteorological Agency began recordkeeping more than 70 years ago, reported NPR. The rainy season usually makes temperatures in the region more bearable.

The country’s government has asked people in the Tokyo area to conserve energy in the face of possible power shortages.

“We ask the public to reduce energy consumption during the early evening hours when the reserve ratio falls,” said Parliamentary Vice-Minister of Economy, Trade and Industry Yoshihiko Isozaki, as reported by The Guardian.

The ministry encouraged those living in the region served by the Tokyo Electric Power Co. to be particularly conservative with their energy use during the peak consumption hours of four to five p.m., The Associated Press reported.

According to reports, less than three percent reserve energy capacity means a risk of blackouts and power shortages, and Tokyo’s was at risk of falling to 3.7 percent, reported The Guardian.

“Please cooperate and save as much power as possible,” said ministry director of electricity supply policy Kaname Ogawa, as The Associated Press reported.

Isosaki encouraged businesses and households to reduce the use of lights and air conditioners, while warning them to be cautious of heatstroke, reported The Guardian.

According to the Mainichi Shimbun newspaper, more than 250 people suffering from heatstroke in Tokyo were taken to the hospital over the weekend.

To help prevent heatstroke, officials were recommending that people not wear masks when outdoors, though many were still wearing them.

“Immediately after the rainy season ends, many people are yet to be fully acclimated to heat and face a greater risk of heatstroke,” said Japan’s meteorological agency in a statement, as The Guardian reported.

The meteorological agency predicted the heat would continue through the beginning of July due to hot air from a high pressure system hanging over the Pacific Ocean, reported The Associated Press.