Jane Kleeb: 'We the People Have Changed the Tar Sands Pipeline Game Forever' 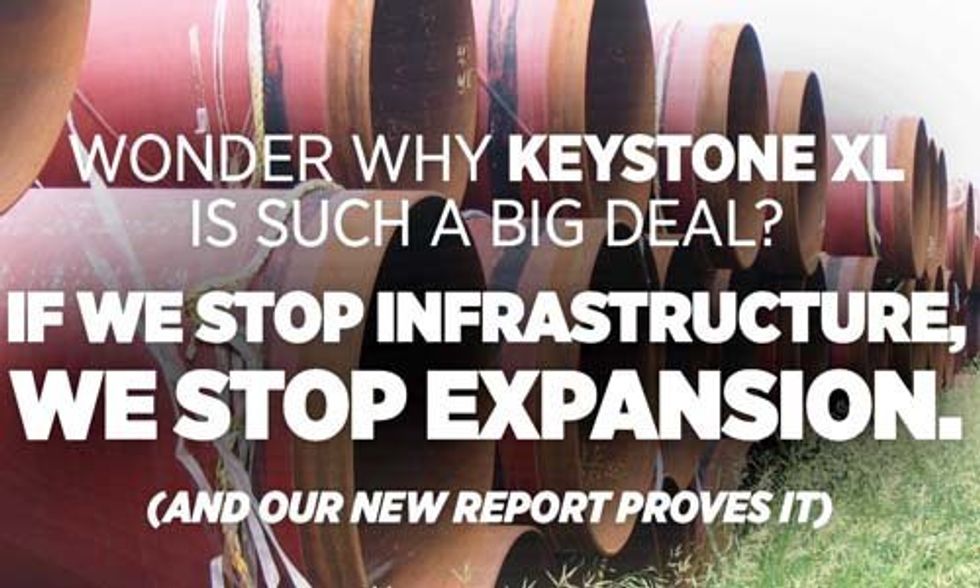 The pipelines exporting tar sands out of Alberta are almost full, according to a new analysis released today by Oil Change International. Without major expansion-driving pipelines such as Energy East, Kinder Morgan or Keystone XL, there will be no room for further growth in tar sands extraction, and tens of billions of metric tons of carbon will be kept in the ground. This would be a significant step towards a safer climate, cleaner water and air, and healthier communities.

“The tar sands have run out of room to grow,” says Hannah McKinnon of Oil Change International. “Production is close to peaking, and now it is time for a recognition that tar sands production has no place in a climate safe world.”

All proposed new pipeline routes out of Alberta are facing legal challenges, opposition by local authorities and regulators, and broad-based public opposition. All of the major projects have been significantly delayed with some cancellations seemingly imminent. No pipeline has been built since 2010, despite active industry efforts.

To assess the impact of these pipeline constraints, Oil Change International built a new and comprehensive model called the Integrated North American Pipelines model. It finds that the current system is 89 percent full, and the industry will run out of transportation capacity as soon as 2017.

Subsequent economic and carbon analysis of the model data finds:

“This model shows us what every board room in the sector is stewing over—this industry does not have room for profitable growth,” says Tom Sanzillo, director of finance at the Institute for Energy Economics and Financial Analysis. “Under mainstream oil price forecasts, the model shows that market access constraints take new growth from being commercial to uncommercial.”

The model’s findings are detailed in a report, Lockdown: The End of Growth in the Tar Sands, published by Oil Change International with the support of Bold Nebraska, Environmental Defense Canada, Equiterre, Institute for Energy Economics and Financial Analysis, Natural Resources Defense Council, Sierra Club U.S. and 350.org.

"This new report is conclusive proof that organizing works,” said May Boeve of 350.org. “In the four years since we began marching, sitting-in, and risking arrest to keep tar sands in the ground, no new pipelines have been built. It's victory for our climate, our future, and for all the communities who are the front lines of this fight. With development locked down, it's time for investors and politicians to look past the tar sands and start investing in the just transition to an 100 percent renewable energy future."

"We are seeing the results of a movement that has stood up to dirty pipelines that harm our climate and our communities” said Lena Moffitt of the Sierra Club. “Now is the time to invest instead in clean and renewable sources of energy and leave dirty fuels where they belong—in the ground.”

“When asked about the Energy East pipeline during the election, Liberal leader and now Prime minister-designate of Canada, Justin Trudeau said that ‘governments give permits, people give permission’ and clearly, people are saying no to pipelines all across North America,” said Steven Guilbeault of Equiterre.

“It’s simple—without more pipeline capacity, the tar sands can not be recklessly expanded,” said Jane Kleeb of Bold Nebraska. “People are standing in the way of Keystone XL and other equally risky and unnecessary pipelines. Gone are the days when Big Oil can buy their way to approval of their risky pipelines. We the people have changed the tar sands pipeline game forever.”

U.S. Government vs. Big Oil in the Fight Over a Chicken