Jane Goodall: COVID-19 Is a Product of Our Unhealthy Relationship With Animals and the Environment 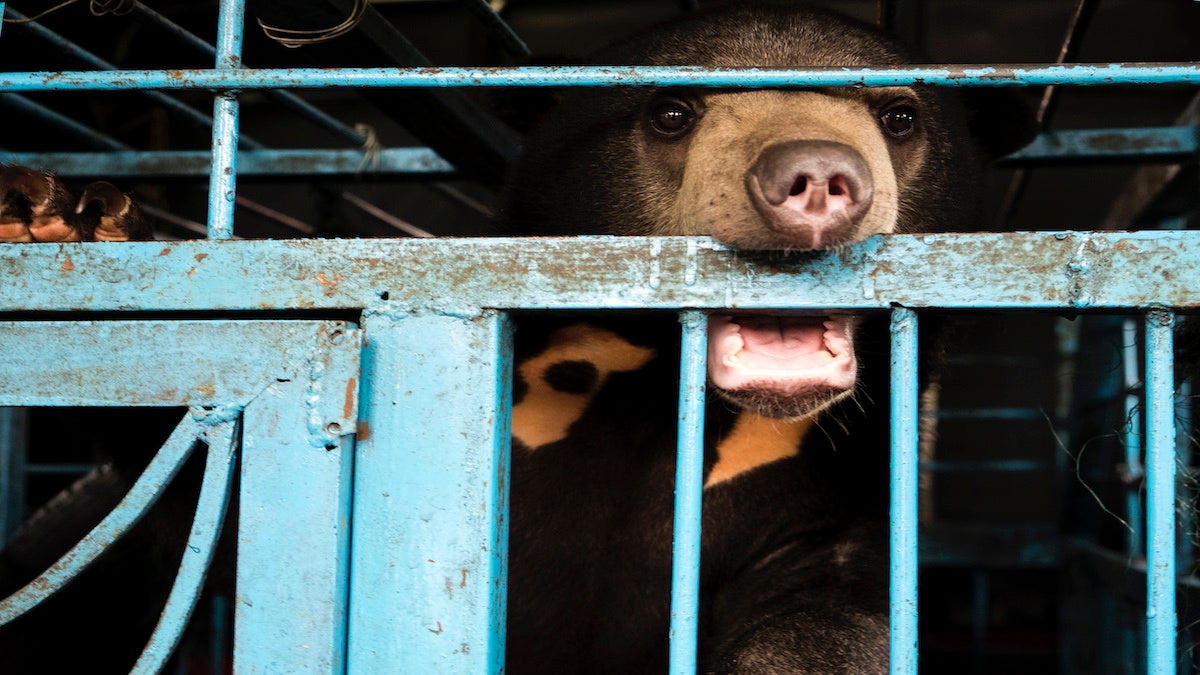 The world is facing unprecedented challenges. At the time of writing, the coronavirus COVID-19 has infected over 3.57 million people globally and as of the 4th of May 250,134 people have died, according to data from Johns Hopkins University.

At present, people in most countries around the world are self-isolating at home (either alone or with family), keeping social distance and reducing going outdoors to a minimum. Some businesses have totally closed down, some carry on with staff working from home, some people are temporarily laid off, and thousands of people around the world have lost their jobs. Already the economic cost of all this is catastrophic.

We all follow the news and pray that the lockdown will end in country after country as the peak infection and death rate is reached and then gradually drops. This has already happened in China, where the COVID-19 coronavirus originated, thanks to the stringent measures undertaken by the Chinese government. We hope that a vaccine will soon be developed and that we can gradually get back to normal. But we must never forget what we have been through and we must take the necessary steps to prevent another such pandemic in the future.

The tragedy is that a pandemic of this sort has long been predicted by those studying zoonotic diseases (those that, like COVID-19, spill over from animals into humans). It is almost certain that this pandemic started with such a spill over in China’s Wuhan seafood market that also sold terrestrial wildlife for food, along with chickens and fish.

When wild animals are sold in such markets, often illegally, they are typically kept in small cages, crowded together, and often slaughtered on the spot. Humans, both vendors and customers, may thus be contaminated with the fecal material, urine, blood and other bodily fluids of a large variety of species – such as civets, pangolins, bats, raccoon dogs and snakes. This provides a perfect environment for viruses to spill over from their animal hosts into humans. Another zoonotic disease, SARS, originated in another wildlife market in Guangdong.

It is not only in China that wildlife markets have provided the ideal conditions for viruses and other pathogens to cross the species barrier and transfer from animal hosts to us. There are markets of this sort in many Asian countries. In the bushmeat markets of Africa – where live and dead animals are sold for food – the hunting, slaughtering and selling of chimpanzees for food led to two spill overs from ape to human that resulted in the HIV-AIDS pandemic. Ebola is another zoonotic disease which crosses from animal reservoirs into apes and humans in different parts of Africa.

Wildlife Trafficking and the Spread of Disease

Another major concern is the trafficking of wild animals and their body parts around the world. Unfortunately, this has become a highly lucrative multi-billion-dollar business, often run by criminal cartels. Not only is it very cruel and definitely contributing to the terrifying extinction of species, but it may also lead to conditions suitable for the emergence of zoonotic diseases. Wild animals or their parts exported, often illegally, from one country to another take their viruses with them.

The shocking pet trade in young wild monkeys and apes, birds, reptiles and other wild animals is another area of concern. A bite or scratch from a wild animal taken into the home could lead to something much more serious than a mild infection.

Once COVID-19 was recognized as a new zoonotic disease, the Chinese authorities imposed a ban on the selling and eating of wild animals, the Wuhan wildlife market was closed down, and the farming of wild animals for food was forbidden.

There are thousands of small operations throughout Asia and other parts of the world where wild animals are bred for food as a way of making a living in rural areas. Unless alternative sources of income for these people, as well as for others exploiting wildlife to make a living, can be found and they can get help from their governments during their transition to other ways of making money, it is likely that these operations will be driven underground and become even more difficult to regulate.

Nevertheless, whatever the problems, it is clearly of great importance that the ban on trading, eating and breeding of wild animals for food should be permanent and enforced – for the sake of human health and the prevention of other pandemics in the future. Fortunately, a majority of Chinese and other Asian citizens who responded to surveys agree that wildlife should not be consumed, used in medicine or for their fur.

The use of some wild animal products for traditional medicine is thus far still legal in China (though rhino horn and tiger bones are banned). And this creates a loophole that will be quickly seized on by those wanting to continue to trade in wild animals such as the highly endangered pangolin, rhinos, tigers and the Asiatic black bear, known commonly as the Moon Bear because of the crescent-shaped white marking on its chest.

It is important to consider the welfare of the animals who are unwittingly responsible for zoonotic diseases. Today we know that all the animals mentioned are sentient beings, capable of knowing fear, despair and pain. Moreover, many of them demonstrate extraordinary intelligence. Allowing the use of wildlife trading for medicinal purposes can lead to unbelievably inhumane treatment of some of these sentient beings.

This is most certainly the case, for example, with bears farmed for their bile in Asia. They may be kept for up to thirty years in extremely small cages – sometimes they cannot even stand up or turn around. The tiny cages prohibit all natural behavior for these intelligent and sentient animals, who endure a life of fear and suffering.

The bile is usually extracted, once or even twice a day, by inserting a catheter, pipe or syringe into the gall bladder, – a highly intrusive and painful procedure. The bears suffer from dehydration, starvation and a variety of infections and diseases. They develop liver cancer (caused by the bile extraction), tumors, ulcers, blindness, peritonitis, arthritis and other ailments. Their teeth are worn down or missing from continually, in desperation, gnawing at the bars that imprison them.

Not only is farming bears in this way extremely cruel, it is also of concern for public health reasons. Poor hygienic conditions, the permanent open wounds of the bears, contamination of bile with feces, bacteria, blood and other bodily fluids are reasons for serious concern. Finally, many of the bears are continuously given antibiotics to keep them alive and this contributes to antibiotic resistance and the emergence of superbugs, resistant to most known antibiotics. The same is true with the raising of domestic animals in factory farms. These superbugs have led to the death of many patients in hospitals around the world.

Unfortunately, Tan Re Qing, a product that contains bile taken from Asiatic black bears and said to be helpful in alleviating symptoms linked to respiratory infections, is being recommended as a treatment for patients infected with COVID-19. And this will encourage the continued practice of bear bile farming.

To end on a note of hope, the active component of bear bile, ursodeoxycholic acid or UDCA, has been available as a synthetic variant for many years, and is a fraction of the cost of bile inhumanely harvested from bears. Unfortunately many people consider bile from wild bears to be more valuable. Traditional Chinese Medicine has great value but, even if the bile from wild bears was a valuable drug, given the cruelty and the risk involved, it should no longer be used – especially as the synthetic product has the same properties. In fact, a survey conducted by Animals Asia in 2011 indicated that 87% of Chinese respondents were in favor of banning bear bile farming, and hundreds of Chinese pharmacies have pledged never to sell bear bile products.

It would be wonderful if all bear bile farms across Asia could be closed and the bears released into those sanctuaries which have been created in China, Vietnam, Malaysia and Laos. There they would be able to walk on grass, climb, bathe in ponds and enjoy the sunshine and the company of other rescued bears. And a decrease in the demand for pangolin scales and rhino horn in many Asian countries for their supposed medicinal value would give a chance for these highly endangered animals to survive into the future. As would a ban on the farming of wild animals for their fur.

It is not only from wild animals that zoonotic diseases have originated. The inhumane conditions of the great factory farms, where large numbers of domestic animals are crowded together, has also provided conditions conducive to viruses spilling over into humans. The diseases commonly known as ‘bird flu’ and ‘swine flu’ resulted from handling poultry and pigs. And domestic animals are also sentient beings who experience fear and pain. MERS originated from contact with domestic dromedary camels in the Middle East, perhaps from consuming products from infected camels such as undercooked meat or milk.

Scientists warn that if we continue to ignore the causes of these zoonotic diseases, we may be infected with viruses that cause pandemics even more disruptive than COVID-19.

Many people believe that we have come to a turning point in our relationship with the natural world. We need to halt deforestation and the destruction of natural habitats around the globe. We need to make use of existing nature-friendly, organic alternatives, and develop new ones, to feed ourselves and to maintain our health. We need to eliminate poverty so that people can find alternative ways to make a living other than by hunting and selling wild animals and destroying the environment. We need to assure that local people, whose lives directly depend on and are impacted by the health of the environment, own and drive good conservation decisions in their own communities as they work to improve their lives. Finally, we need to connect our brains with our hearts and appropriately use our indigenous knowledge, science and innovative technologies to make wiser decisions about people, animals and our shared environment.

While there is a justified focus on bringing COVID-19 under control, we must not forget the crisis with potentially long-term catastrophic effects on the planet and future generations – the climate crisis. The movement calling for industry and governments to impose restrictions on the emission of greenhouse gases, to protect forests, and clean up the oceans, has been growing.

This pandemic has forced industry to temporarily shut down in many parts of the world. As a result, many people have for the first time experienced the pleasure of breathing clean air and seeing the stars in the night sky.

My hope is that an understanding of how the world should be, along with the realization that it is our disrespect of the natural world that has led to the current pandemic, will encourage businesses and governments to put more resources into developing clean, renewable energy, alleviate poverty and help people find alternative ways of making a living that do not involve the exploitation of nature and animals.

Let us realize we are part of, and depend upon, the natural world for food, water and clean air. Let us recognize that the health of people, animals and the environment are connected. Let us show respect for each other, for the other sentient animals, and for Mother Nature. For the sake of the wellbeing of our children and theirs, and for the health of this beautiful planet Earth, our only home.