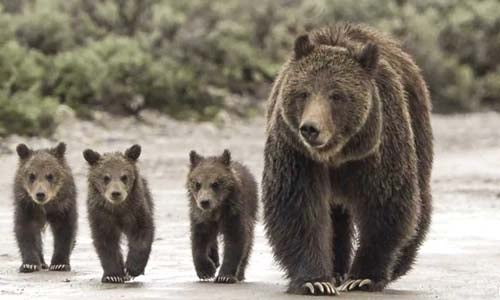 Dr. Jane Goodall is one of 58 prominent scientists and experts who have signed a letter asking the U.S. Fish and Wildlife Service (USFWS) to retain Endangered Species Act protections for Yellowstone-area grizzly bears.

Grizzly bears still need to be protected. Join #JaneGoodall & others helping to save them. https://t.co/bUZeu8hlG2 pic.twitter.com/LEsUY05G9V

Incidentally, their letter was released around the same time that Montana wildlife officials announced draft grizzly hunting regulations that, once approved, would offer $50 permits to local residents and $1,000 permits for out-of-state hunters to shoot the bears, The Guardian reported. The state’s grizzly hunting plan would be implemented if the bears are taken off the federal endangered species list.

USFWS has proposed de-listing the Yellowstone grizzlies, saying that their numbers have recovered to a point where federal protection is no longer needed.

However, opponents argue that the iconic animals are not ready for de-listing because climate change and other human-caused factors have threatened their food sources. The letter states:

Grizzly bears face multiple threats to persistence including the loss of their primary food resources. Currently, whitebark pine seeds, native cutthroat trout, huckleberries, army cutworm moths, elk and bison are either declining and/or are expected to decline in the foreseeable future as a result of habitat loss, climate change, drought, invasive species and other anthropogenic causes.

Goodall recently delivered a recorded video message to the House Natural Resources Committee in Washington DC to urge protection for the grizzlies, which were put on the endangered species list in 1975.

“Forty years ago when the grizzlies at the Yellowstone ecosystem numbered less than 150 individuals and their survival seemed precarious, it was thanks to protection under the Endangered Species Act in 1975 that their number today has risen slowly to around 700,” the renowned primatologist and conservationist said.

“But their future isn’t secure yet because they face so many threats to survival. Two of their four major foods have all but been wiped out due to climate change, disease and invasive species. And they may be killed if they prey on livestock in their increasingly difficult search for food.”

Wildlife biologist David J. Mattson, who also signed the letter, explained to NPR that the plight of the whitebark pine trees is at the center of the Yellowstone grizzly fight. The seeds from the tree are a major source of food for the grizzlies but climate change is wiping out the trees.

Mattson told NPR that climate change has also forced the bears to roam further away from protected areas in search of food thus increases the risk of bear encounters with ranchers and big-game hunters.

https://twitter.com/EcoWatch/status/708780917163233284 might be shot by a trophy hunter so that her head can be mounted on a wall, her skin laid on the floor for human feet to trample,” as Goodall lamented in her video message. “I think many hearts would break. I know mine would.”

According to The Guardian, “officials in the three states that surround Yellowstone—Wyoming, Idaho and Montana—have insisted the re-opening of hunting after 40 years won’t harm the grizzly population.”

Care2 noted that UFWS tried to de-list grizzly bears in 2007 but environmental groups sued. In 2009, a federal judge in Montana ruled that Yellowstone grizzly bears should continue to be protected because not only were the safeguards promised by the USFWS unenforceable, but due to climate change, bears were losing a major part of their diet due to whitebark pine trees dying off.

The USFWS is taking public comment until May 10 on whether to de-list Yellowstone-area grizzlies.

Listen to the NPR report here: