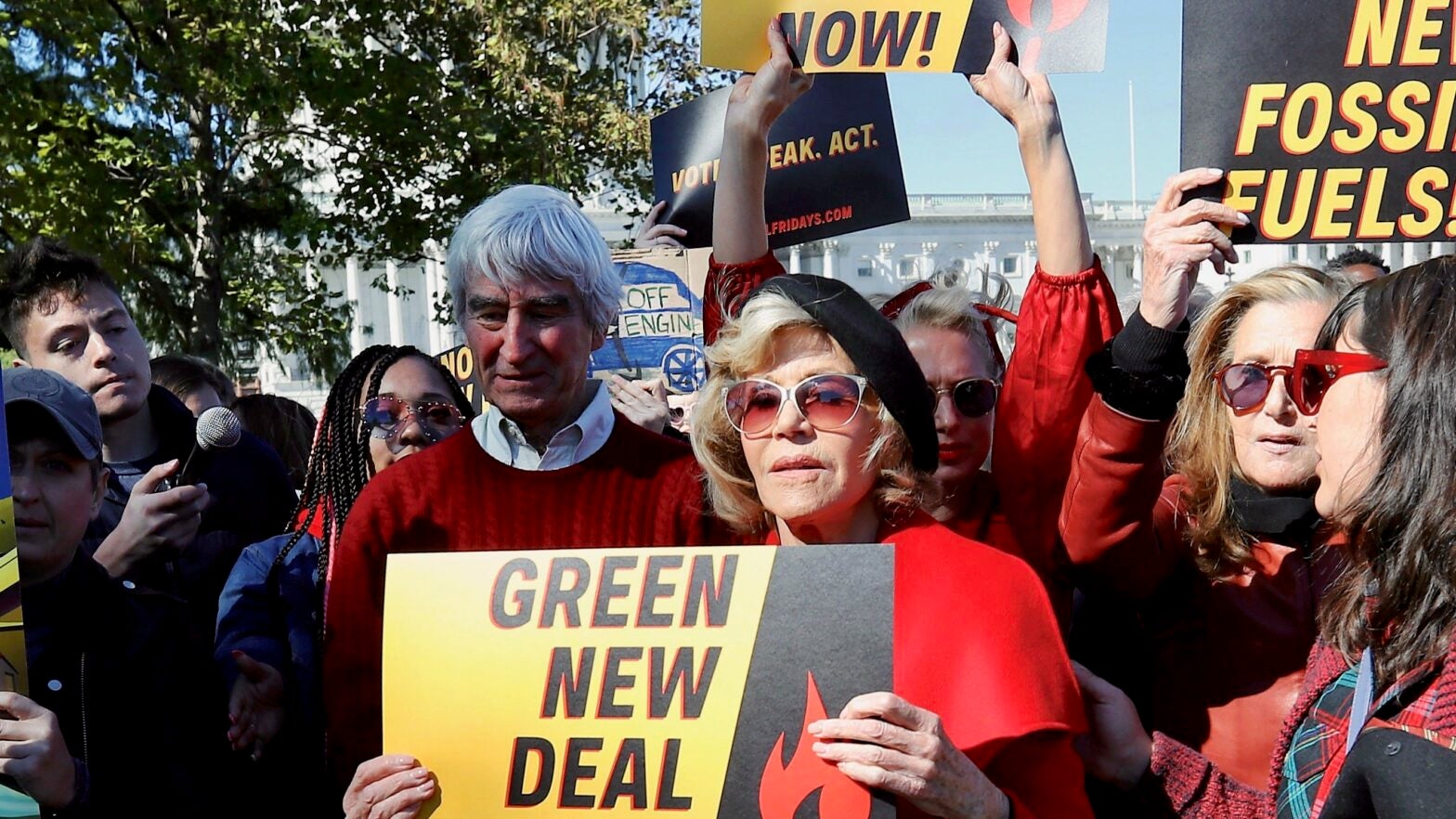 It appears Jane Fonda is good for her word. The actress and political activist said she would hold demonstrations on Capitol Hill every Friday through January to demand action on the climate crisis. Sure enough, Fonda was arrested for demonstrating a second Friday in a row Oct. 18, according to The Hollywood Reporter. Only this time, her Grace and Frankie co-star Sam Waterston joined her.

The two actors were arrested with 15 other people demanding a Green New Deal, a plan to transition the U.S. to 100 percent renewable energy by 2030 while promoting green jobs and greater equality.

“We can do this!” the 78-year-old Waterston said during the protest, according to CBS News. “We need something to push for that’s as big as the problem.”

Fire Drill Fridays, the name for the movement Fonda has started, said it was Waterston’s first time being arrested.

Sam Waterston getting arrested for the first time for a #GreenNewDeal #firedrillfriday pic.twitter.com/yRfvJagB9G

The 17 demonstrators were arrested for unlawfully demonstrating and charged with crowding and obstructing or incommoding, Capitol police spokeswoman Eva Malecki told CBS News.

Ahead of the protest, Fonda and Waterston appeared in a video explaining the Green New Deal, according to The Hollywood Reporter. Fonda has promised to lead in to every protest with a “digital teach-in” Thursday evening explaining a different aspect of the climate crisis and the fight to combat it.

In a Green New Deal, environmental devastation is considered especially heinous. On the planet, the dedicated activists who vote, speak, and act against these vicious injustices are members of an inclusive squad known as Fire Drill Fridays. These are their stories.

For Fonda, Fire Drill Fridays marks a return to arrestable activism after a four decade break. She was last arrested in the 1970s, according to an Associated Press story published by NBC News.

Fonda told The Associated Press that getting arrested had changed in the last 40-some years.

“They use white plastic things on your wrists instead of metal handcuffs, and that hurts more,” Fonda said.

She also acknowledged to The Associated Press that getting arrested at 81 made for new difficulties.

“The only problem for me is I’m old,” Fonda said of her first climate-related arrest Oct. 11. “I had my handcuffs behind me, and I couldn’t get into the paddy wagon because you have to step way up as you’re leaning over and I had nothing to hang on to.”

But her age is also part of the point. Fonda said she was inspired by young climate activist Greta Thunberg, and wanted to attract others like her who were trying to make environmentally conscious choices in their daily lives but did not know what else they could do.

So far, the protest movement seems to be effective. It drew a much bigger crowd in its second Friday, and most of the 17 arrestees had white or gray hair, The Associated Press noted.

Fire Drill Fridays has five demands, according to the website:

Next week’s teach-in and demonstration will focus on the impact of climate change on the oceans. Good Place star Ted Danson and Greenpeace USA Oceans Director John Hocevar will join Fonda for Thursday’s discussion.