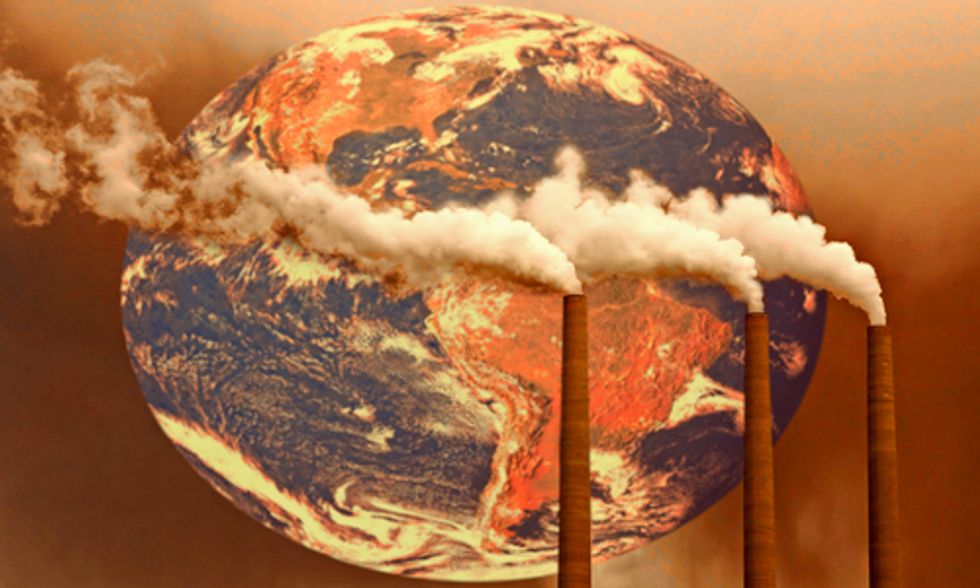 Governments have set the wrong target to limit climate change. The goal at present—to limit global warming to a maximum of two degree Celsius higher than the average for most of human history—“would have consequences that can be described as disastrous,” say 18 scientists in a review paper in the journal PLOS One.

The paper’s lead author is James Hansen, now at Columbia University, NY, and the former NASA scientist who in 1988 put global warming on the world’s front pages by telling a U.S. government committee that, “It's time to stop waffling so much and say the evidence is pretty strong that the greenhouse effect is here.”

Their argument is that humanity and nature—“the modern world as we know it”—is adapted to what scientists call the Holocene climate that has existed for more than 10,000 years—since the end of the Ice Age, the beginnings of agriculture and the first settlement of the cities.

Warming of one degree Celsius relative to 1880–1920 keeps global temperature close to the Holocene range, but warming of two degree Celsius, could cause “major dislocations for civilization.”

The scientists study, uncompromisingly entitled Assessing ‘Dangerous Climate Change’: Required Reduction of Carbon Emissions to Protect Young People, Future Generations and Nature differs from many such climate analyses because it sets out its argument with remarkable directness and clarity, and serves as a useful briefing document for anyone—politicians, journalists and lay audiences—anxious to better understand the machinery of climate, and the forces that seem to be about to dictate climate change.

Its critics will point out that it is also remarkably short on the usual circumlocutions, caveats, disclaimers and equivocations that tend to characterise most scientific papers. Hansen and his co-authors are however quite open about the major areas of uncertainty: their implicit argument is that if the worst outcomes turn out to be true, the consequences for humankind could be catastrophic.

The scientists case is that most political debate addresses the questions of reducing greenhouse gas emissions, but does not and perhaps cannot factor in the all potentially dangerous unknowns—the slow feedbacks that will follow the thawing of the Arctic, the release of frozen reserves of methane and carbon dioxide in the permafrost and the melting of polar ice into the oceans. They point out that 170 nations have agreed on the need to limit fossil fuel emissions to avoid dangerous human-made climate change.

“However the stark reality is that global emissions have accelerated, and new efforts are underway to massively expand fossil fuel extractions by drilling to increasing ocean depths and into the Arctic, squeezing oil from tar sands and tar shale, hydro-fracking to expand extraction of natural gas, developing exploitation of methane hydrates and mining of coal via mountain-top removal and mechanized long wall-mining,” the scientists write.

The scientists argue that swift and drastic action to limit global greenhouse gas emissions and contain warming to around one degree Celsius would have two useful consequences. One is that it would not be far from the climate variations experienced as normal during the last 10,000 years, and secondly that it would make it more likely that the biosphere, and the soil, would be able to sequester a substantial proportion of the carbon dioxide  (CO2) released by human industrial civilization.

Trees are, in essence, captive carbon dioxide. But the warmer the world becomes, the more likely it is that existing forests—the Amazon, for example—will start to release more CO2 than they absorb, making the planet progressively even warmer.

Therefore the scientists make a case for limiting overall global carbon emissions to 500 giga-tons rather than the 1,000 billion tons in the two degree Celsius rise scenario.

“Although there is merit in simply chronicling what is happening, there is still opportunity for humanity to exercise free will,” says Hansen.