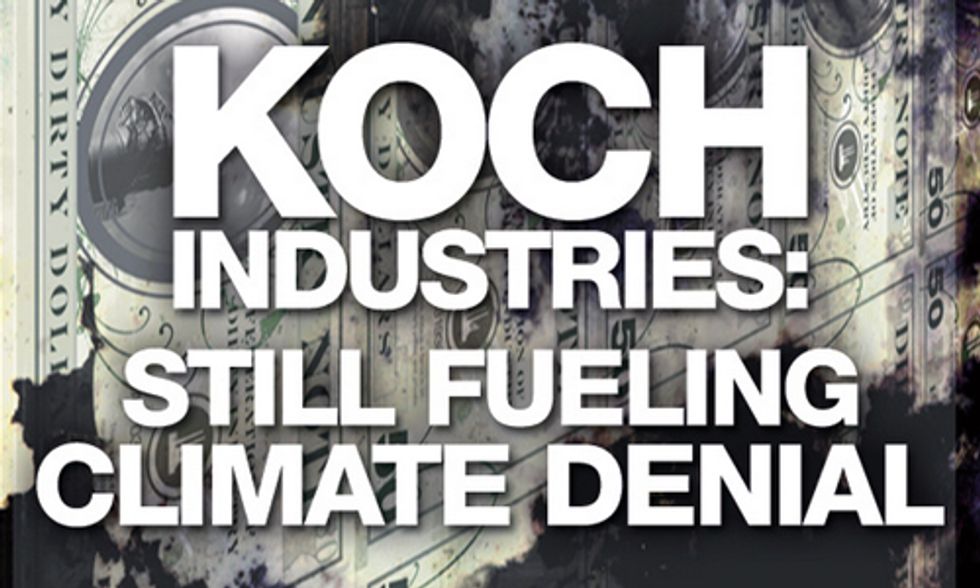 Hysterics at the right wing think tanks and their acolytes at The Washington Times, talk radio and the blogosphere, are foaming in apoplexy because I supposedly suggested that "all climate deniers should be jailed." Last week, that canard leapt from the wingnut echo chamber into New York magazine, which reported, under Jonathan Chait's by-line, that "Robert F. Kennedy, Jr. shares the opinion that climate denial should be criminalized." Chait was quoting the National Review's Kevin Williamson who made that outlandish claim at one of Heritage Foundation's annual "Conference for Kooks." Of course I never said that. I support the First Amendment which makes room for any citizen to, even knowingly, spew far more vile lies without legal consequence.

I do, however, believe that corporations which deliberately, purposefully, maliciously and systematically sponsor climate lies should be given the death penalty. This can be accomplished through an existing legal proceeding known as “charter revocation." State Attorneys General can invoke this remedy whenever corporations put their profit-making before the “public welfare."

In 1998, New York State's Republican Attorney General, Dennis Vacco successfully invoked the “corporate death penalty" to revoke the charters of two non-profit tax-exempt tobacco industry front groups, The Tobacco Institute and the Council for Tobacco Research (CTR). The two groups Vacco annulled were creatures of a decade long campaign funded principally by tobacco giant, Brown & Williamson to avoid costly health regulations that would diminish the profit margins of an industry that was killing one out of five of its customers. “Doubt is our Product," explained Brown & Williamson's notorious 1969 memo outlining the reptilian communications strategy that hatched its front groups.

Vacco complained that these companies were “[feeding] the public a pack of lies in an underhanded effort to promote smoking so as to addict America's kids." Attorney General Vacco seized their assets and distributed them to public institutions.

Laws in every state maintain that companies that fail to comply with prescribed standards of corporate behavior may be either dissolved or, in the case of foreign corporations, lose their rights to operate within that state's borders. These rules can be quite expansive and, in contrast to the U.S. Supreme Court's ­­­­recent rulings on campaign finance law, companies, under state laws, enjoy far less protection than human beings. New York, for example, prescribes corporate death whenever a company fails to “serve the common good" and “to cause no harm."

Just as Big Tobacco funded the now moribund CTR and the Tobacco Institute to systematically deceive the public about the perils of cigarettes, the carbon cronies, with far larger profits at stake, have funded an army of front groups to persuade the public that global warming is a hoax.

For more than a decade, petroleum industry behemoths lead by Koch Industries and ExxonMobil, have waged a successful multi-million dollar propaganda blitz to mislead the public about global warming using the same techniques honed by Big Tobacco in its campaign to hoodwink the public about smoking.

In their efforts to impede state, national and international efforts to protect humans from the destructive climate chaos, both companies have engaged in massive spending sprees purchasing phony “junk" science devised to undermine the overwhelming scientific consensus on global warming. Between 1997 and 2013, ExxonMobil, pumped more than $29.9 million into an elaborate network of more than 75 front groups to manufacture skepticism about the oncoming climate catastrophe. At the same time, Koch Industries has piped at least $67,042,064 to more than 50 groups that play central roles in the Koch-funded offensive against climate science.

Two decades after Brown & Williamson's notorious “Doubt is our Product" memo, the oil industry launched its own anti-science juggernaut replicating Big Tobacco's and utilizing many of the same corrupt scientists and PR firms. Two secret memos dictated the blueprint for Big Carbon's anti-science offensive. The American Petroleum Institute (API)—lobbyist for ExxonMobil, Chevron, BP, Shell and ConocoPhillips—was the spear tip of a multi-million dollar campaign to confound American citizens about climate science by manipulating the media. On April 3, 1998, API laid out its “Global Climate Science Communications action plan," the detailed blueprint of “tactics and strategies" for deceiving the American people and press by sewing doubts about climate science. The API team would create front groups and “educate" editorial boards and corporate CEOs to challenge “prevailing scientific wisdom." Under “recruiting and training," API outlines its plan for tapping neophyte—“read malleable"—scientists and tame journalists (“e.g. John Stossel," the memo suggests) to bamboozle the public. “Victory will be achieved," API promises, “when average citizens and the media recognize uncertainties in climate science;" recognition of uncertainties becomes part of the "conventional wisdom."

Four years later in 2002, conservative pollster Frank Luntz in an influential memo to President George Bush and oil patch lawmakers, applauded the industry for the success of the API campaign. “Voters believe that there is no consensus about global warming within the scientific community." Nevertheless, he warned Big Carbon's indentured servants on Capitol Hill “the science [is closing against us] but is not yet closed." He advised, “therefore, you need to continue to make the lack of scientific certainty a primary issue in the debate."

Over the next dozen years, a string of front groups conducted the deceptive anti-science campaign outlined in the API's 1998 plan and Luntz's 2002 memo and funded primarily by ExxonMobil and Koch.

For example, CEI, which describes itself as being “a leader in the fight against the global warming scare," spent years denying that warming was real, and then, as the tsunami of evidence made that position untenable, pivoted to the more defensible posture that human beings are not causing it. CEI has more recently beat its final retreat to the terminal default position that global warming is great because it will “create a milder, greener, more prosperous world." The floods, fires, drought, rising oceans, disappearing ice caps, melting glaciers, drowned cities and refugees have not exactly been “mild." But things have been prosperous and “green"—if one means greenbacks—for the Koch Brothers and ExxonMobil, who are enjoying the biggest profits in world history. “You're Welcome, Planet Earth!"

AEI, one of the richest and most influential think tanks in the U.S.—and the high priest of climate denial—offered a $10,000 bounty in 2006 to any scientist or economist who could produce an article undermining the UN's Intergovernmental Panel on Climate Change report. The IPCC report was the most comprehensive review yet of climate change science representing the scientific consensus among thousands of climate scientists comprising the leading and most prestigious and scientific stars from more than 130 participating nations.

Any state attorney general with the will, resolve and viscera to stand to up to the dangerous and duplicitous corporate propagandists, has authority to annul the charters of each of these mercenary merchants of deceit. An attorney general with particularly potent glands could revoke the charters not just oil industry surrogates like AEI and CEI, he or she could also withdraw state operating authority from the soulless, nationless oil companies that have sponsored “Big Lie" campaigns and force them to sell their in-state assets to more responsible competitors.

Koch Industries and ExxonMobil have particularly distinguished themselves as candidates for corporate death. No other companies have worked harder or spent more money to impede the government from taking action on global warming to safeguard public welfare. Both companies have employed artifice on a massive scale and spent tens of millions of dollars to purchase fraudulent junk science. The greedy, immoral, anti-social pathology behind ExxonMobil and Koch's mendacious crusade is even starker given the open acknowledgment since 2007 by the other major oil companies including Shell, Chevron and BP, that burning oil is causing climate change.

Though they like to invoke patriotic themes and drape themselves in the flag, the oil barons have persistently demonstrated their enthusiasm for putting corporate profits ahead of the public welfare.

“I'm not a U.S. company," Exxon's legendary former CEO, Lee Raymond told his board, “and I don't make decisions on what is good for the U.S.." These companies are not friends to America. They are enemies of mankind.

The notion that a state attorney general might actually execute one of these villains is not a pipe dream. State attorneys general have historically shown a willingness to stand up to American democracy's biggest corporate bullies including, Wall Street, Big Tobacco, coal burning utilities and the oil titans even in eras, like the present, when corporate money has subverted our democracy and extracted the spinal cords from most politicians. It was 46 courageous state attorneys generals who brought down the cigarette companies. It was nine northeastern state attorneys general who sued the coal burning utilities for damages to their citizens from airborne pollutants. And it was state attorneys general in New York, Ohio and Texas who, during the Gilded Age, dismantled the Standard Oil octopus, and restored economic democracy to America. That deadly Frankenstein monster, now reassembled and resurrected as ExxonMobil, poses an even greater threat today to our historical values and quality of life.

Let's all hope for and vote for a home state Attorney General candidate who promises to stand up against carbon's duplicitous proxies and fight for truth, justice and democracy, and to provide our children with safe, healthy, dignified and wholesome communities and the prosperity that should not be exclusive to the Koch Brothers and ExxonMobil.