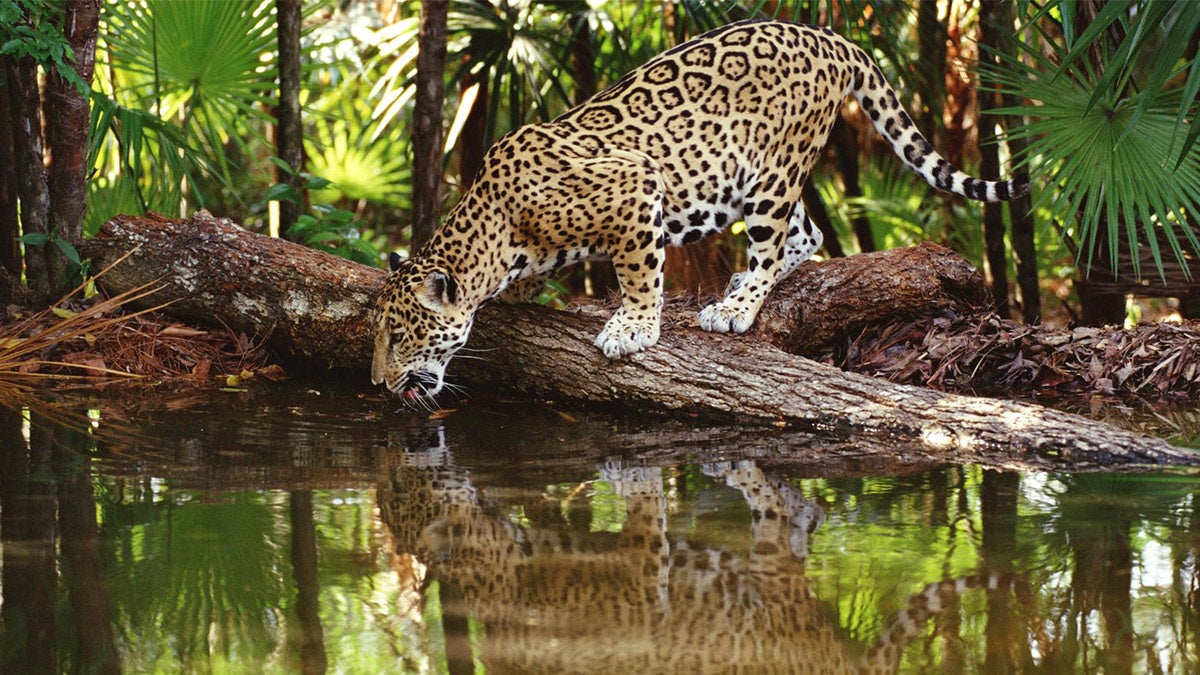 A jaguar in the Atlantic Rainforest in Brazil in 2006. Land Rover Our Planet / Flickr

The fires ravaging the Amazon forest in Brazil and Bolivia this year have burned key habitats of at least 500 adult, resident jaguars as of Sept. 17, rendering them dead or homeless, say experts at Panthera, the global wild cat conservation organization.

“The number of homeless or dead jaguars has undoubtedly increased since Panthera’s estimate was released, and will continue to increase until the rains come,” Esteban Payan, Panthera’s South America regional director, told Mongabay in an email.

To estimate the number of affected jaguars (Panthera onca), Panthera researchers used the total area of jaguar habitat burned, taken from burned areas reported by the Brazilian National Institute for Space Research (INPE) and the Environmental Secretariat of the Governor’s office of Santa Cruz, Bolivia. They combined this with a jaguar density estimate of 2.5 jaguars per 100 square kilometers (39 square miles) derived from a 2018 study authored by jaguar experts.

“Density from jaguar populations in central Amazonia, the work from my Ph.D., was more around 3 animals in 100 square kilometers. So again, this is ‘at least’ that number [500] of jaguars impacted,” Payan said.

In Bolivia in particular, the fires have so far destroyed more than 2 million hectares (4.9 million acres) of forest in one of South America’s key “catscapes,” a region that Panthera has identified as having the highest predicted density of cat species on the continent. Some parts of Bolivia’s catscape are home to eight cat species, including the jaguar, puma (Puma concolor), ocelot (Leopardus pardalis), margay (Leopardus wiedii), oncilla (Leopardus tigrinus), jaguarundi (Herpailurus yagouaroundi), Geoffrey’s cat (Leopardus geoffroyi) and Pampas cat (Leopardus colocola). 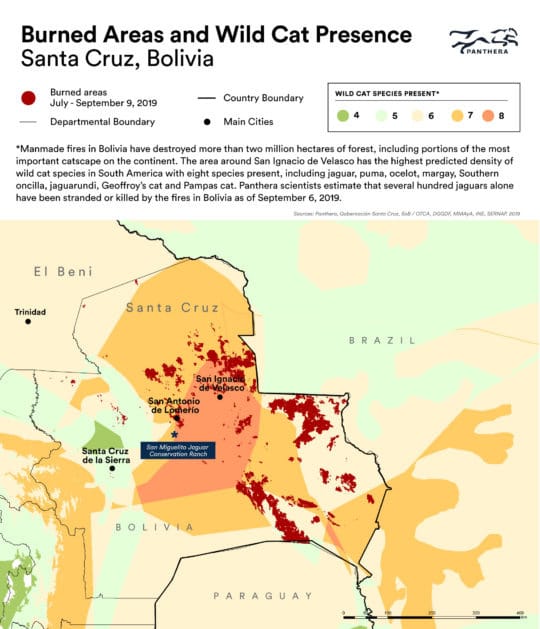 Some researchers estimate that millions of animals have likely been lost to the Amazon fires this year. But given the widespread and destructive nature of the fires this year, the exact number of jaguars killed is difficult to calculate. Panthera researchers, however, predict that hundreds of jaguars will starve or turn to killing livestock in neighboring ranches as a consequence of the fires, “where they will be hunted down,” Payan said.

Increased interactions between jaguars and livestock will likely only intensify conflict between the animals and ranchers and farmers. This would throw a spanner in the efforts of conservationists who’ve been working to resolve this conflict for decades.

“Jaguars with GPS collars from our partner Oncafari in the Brazilian Pantanal have already been captured and moved from the fires in an attempt to protect the cats,” Payan said.

In addition to jaguars, Panthera has obtained reports and captured images of pumas and ocelots fleeing the fires, as well as of animals that burned to death, both small, slow-moving ones like turtles, tortoises and caimans, and fast-moving ones like marsh deer and peccaries. “Fires don’t burn in a straight line so many animals get trapped in circles of fire and many others die of thirst and heat even before fire touches them,” Payan said. 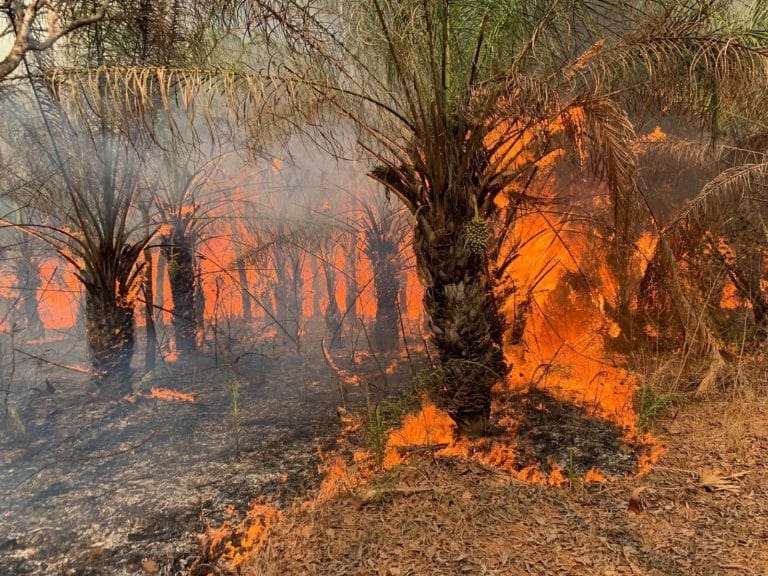 Burned habitat in the Brazilian Pantana. Image by Oncafari.

Fires not only destroy critical habitats, they also fragment forests, reducing connectivity between habitats that animals need to live and thrive. Moreover, repeated burning of the Amazon forest every year — almost entirely lit by humans to clear land for ranches, pastures or agriculture land — has compromised the forest’s ability to recover when some of the burned areas are eventually abandoned and allowed to regenerate, researchers have found.

“The shock waves of these exceptionally large and, for the most part, human-lit fires are being felt not only by the wildlife and people of Brazil and Bolivia, but also those in Peru and Paraguay,” Howard Quigley, Panthera’s jaguar program and conservation science executive director, said in a statement. “These fires stand to directly impact the continent, and in the end, the health of the planet as they hurt one of the cradles of biodiversity and greatest counter forces against global warming.”

Overall, the fires will affect Panthera’s efforts to create one of the world’s largest, contiguous jaguar corridors across South America’s Pantanal region. But Payan said that the team is hoping to address this by scaling up its cooperation with communities, first responders, local NGOs, and protected-area managers; better equipping rangers to manage fires in protected areas; reducing cattle losses to jaguars and increasing productivity on existing ranches to limit further deforestation; and working with landowners, businesses and governments to plan and manage lands responsibly.

“Fire is now an intensified threat to jaguars and their associated biodiversity because of its intensity, speed and scale,” he said. “The intensity of destruction is nearly absolute, the speed of propagation implies that in minutes it can become nearly impossible to control, and as it will cover vast areas the scale of damage to the natural world is immense.” 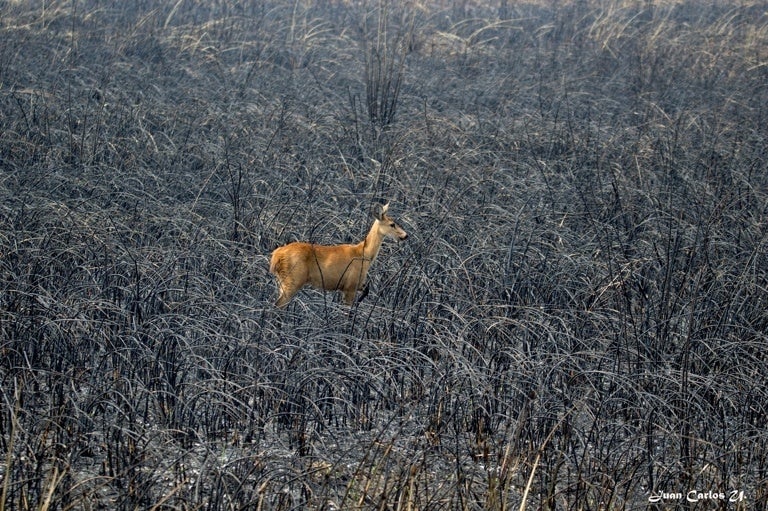 Marsh deer in Bolivia, one of the jaguar’s prey. Image by Juan Carlos Urgel.