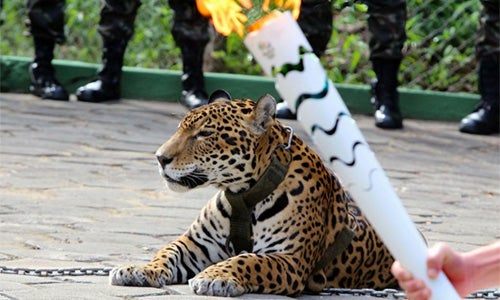 A jaguar was shot and killed Monday after an Olympic torch passing ceremony in Brazil.

The female jaguar, who was chained and sedated, was shot after she escaped from her handlers. She approached a soldier who shot her with a single pistol shot, Reuters reported. The torch ceremony and jaguar shooting occurred at a zoo attached to a military training center in the Amazon city of Manaus. 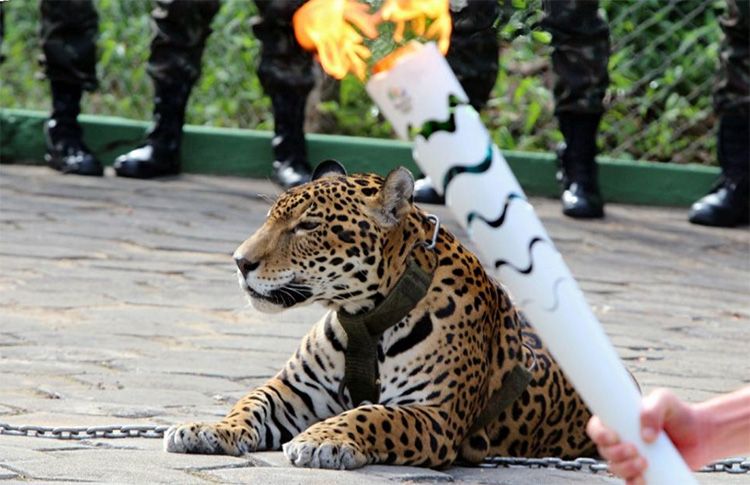 The female jaguar, Juma, shot and killed after an Olympic torch passing ceremony in Manaus, Brazil.

The military did not denounce the shooting, according to Buzzfeed:

“As security procedure to protect the physical integrity of the military and team treaters, the animal was shot with a pistol and died,” the military said in a statement.

A jaguar was shot and killed after an Olympic torch ceremony in Brazil.https://t.co/7REdrnFvvr

The jaguar’s presence at the ceremony was illegal, according to Ipaam, Amazonas state government environmental authority. Ipaam oversees the use of wild animals in the state.

“No request was made to authorize the participation of the jaguar ‘Juma’ in the event of the Olympic torch,” Ipaam said in a statement. The group is investigating the incident.

A brief part of the ceremony is captured in this ABC News video:

The Rio 2016 Olympic committee issued an apology via Twitter after the incident.

“We made a mistake in permitting the Olympic torch, a symbol of peace and unity, to be exhibited alongside a chained wild animal,” the committee said. “This image goes against our beliefs and our values. We guarantee that there will be no more such incidents at Rio 2016.”

Brazilians and animal lovers have expressed outrage over the incident.

Translation: “The jaguar had nothing to do with this mess, she tried to escape and ended up dead.”

Translation: “What sense does it make to bring a jaguar to a torch passing ceremony?”

Many responded to the Rio 2016 twitter account’s apology in anger.

People for the Ethical Treatment of Animals (PETA) weighed in too.

“Wild animals held captive and forced to do things that are frightening, sometimes painful and always unnatural are ticking time bombs—captivity puts animal and human lives at risk,” the organization wrote in a blog post Tuesday.

Jaguars are a near-threatened species with an estimated 15,000 left in the wild, according to Defenders of Wildlife. There are only three known populations left in the U.S., the biggest of which consists of no more than 120 cats. The species is already extinct in Uruguay and El Salvador, according to the International Union for Conservation of Nature.