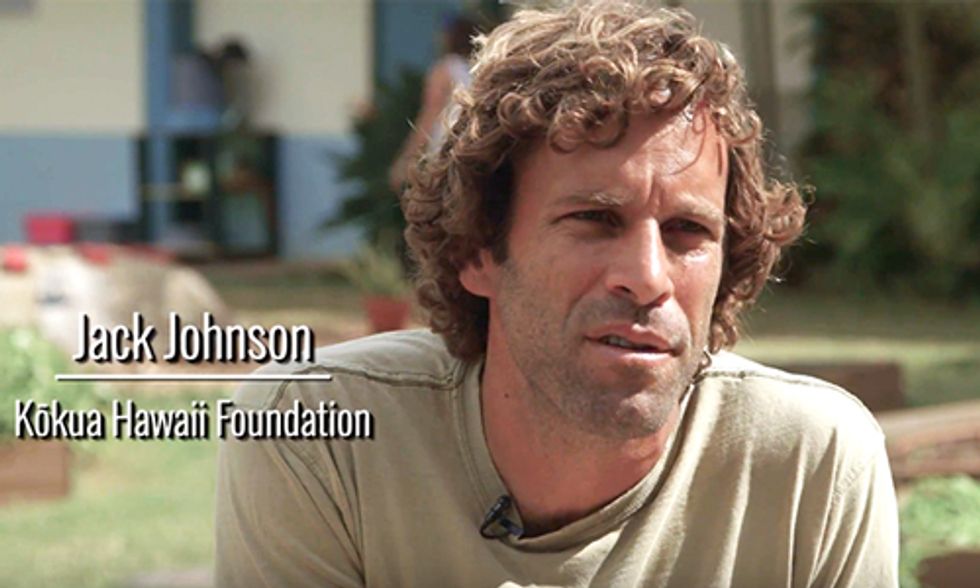 It's easy to like Jack Johnson's laid-back, acoustic-rock music. For the eco-minded, it's even easier to like the Hawaii-born musician for his environmental activism and green touring practices.

Jack Johnson digs through worms as part of a compost lesson at Lanikai Elementary School in Hawaii.

Recently, we got the opportunity to visit Johnson in Hawaii, where he and his wife Kim started the Kokua Hawaii Foundation, a nonprofit that provides environmental education in Hawaii schools and communities. Johnson showed us his foundation's work in action at Lanikai Elementary Public Charter School where he was acting as a docent for a third grade composting lesson (worms, cool!). We also learned how the island of Oahu deals with its food waste and how Johnson is moving the needle to lessen the music industry's environmental impact.

It's all here in this mini-documentary we made with Johnson in partnership with Nationswell.

Lanikai Elementary participates in Kokua Hawaii Foundation's AINA In Schools program. The program, named for the Hawaiian word for “land," connects children to their local land, waters and food by providing lesson plans to schools about gardening, nutrition and waste reduction. Parents, grandparents, community members—even Jack and his wife Kim—volunteer to teach the lessons.

The goal of the program is to get more local food into the schools and teach the next generation the importance of sustainable food. This message is especially relevant in Oahu where more than 90 percent of food is imported and most food waste is burned rather than composted. Fortunately, things are starting to change. The Big Island will soon construct a composting facility for food waste and compostable packaging. Hopefully, with help from this video, Oahu will follow their lead!

Johnson also carries his environmental messages on tour. Early in his career he became concerned with the enormous impact concerts have on the environment. So he started making changes, like running tour vehicles on biodiesel and making refillable water bottle stations available to fans. He has compost bins on tour buses and requires the venues he plays to cooperate with an environmentally responsible rider. Sometimes the changes he requests become permanent policies at venues.

“A lot of this stuff I've learned from Neil Young and Willie Nelson, these guys who have been touring for a long time," Johnson said. “It's something we take real seriously and we're trying to improve on every time we tour."

Over the years, Johnson says he's seen improvements in sustainable practices in the music industry, especially in the food area. A decade ago, he had to bring his own caterer to source local food at each location to feed the crew. Now, he's able to find caterers in each city that specialize in local sourcing.

Johnson's team also donates any leftover food through local food rescue groups whenever possible and makes sure the rest gets composted, even if it means bringing it to the next town until they find a place that can take it. “We've even had times where we're crossing borders and getting in trouble because we have all this food waste," he said.

But even one of the music industry's greenest musicians can get discouraged that the environmental movement isn't moving fast enough. “You can't help but wondering if all the work you're trying to do, is it working at all?" he said.

That's why Johnson's work with children is so important. "All it takes is for me to meet a sustainability major or an environmental engineering major who says, 'I remember when you came to my school and a big part of why I chose this path is those lessons I used to do,'" Johnson said. “It's about planting these little seeds. And to see that snowball effect … that's what give me hope."