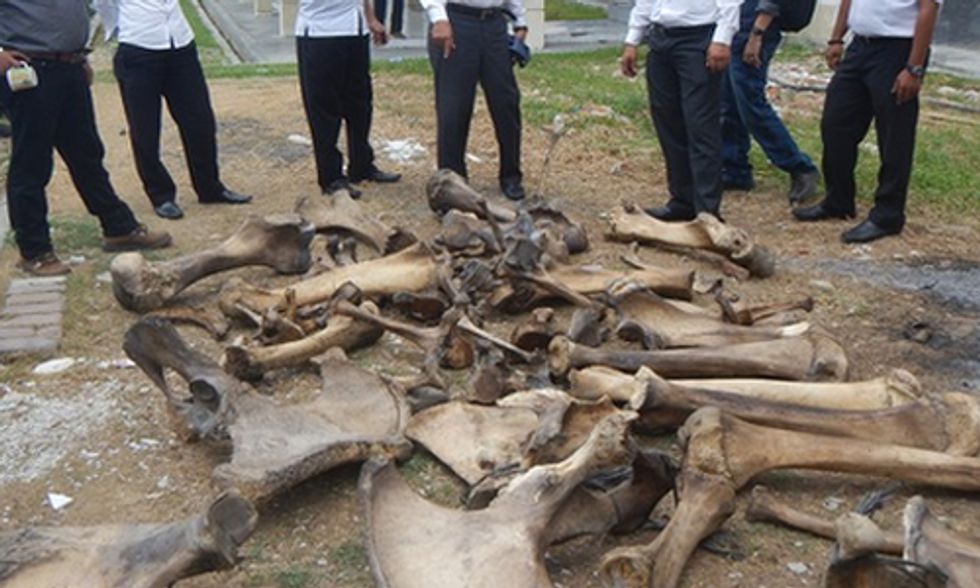 The suspects were arrested in possession of ivory, elephant teeth, and elephant bones. Photo credit: WCS

The arrest, made on May 4, was conducted by the Aceh Provincial Police (Polda Aceh) and supported by the Wildlife Crimes Unit. Two suspects were arrested in the town of Muelabo, includeding the owner of a well-known shop dealing in illegal wildlife and the trader who supplied him.

The supplier provided ivory and elephant bones, along with live orangutans, a live tiger cub, as well as skins from tigers, clouded leopards and golden cats. Authorities believe the wildlife came from a group of hunters operating in the regencies of West Aceh and Nagan Raya.

“Aceh police are committed to strengthening law enforcement to protect Aceh’s natural resources and ecosystems,” said Director of Criminal Division of Polda Aceh, Joko Irwanto, M. Si. “From this case we confiscated 3 kilogramss of ivory, 1 raw ivory tusk and up to 650 kilograms of elephant bones. We believe this came from at least two elephants.”

Aceh police with some of the elephant bones confiscated from the suspects. Photo credit: WCS

“We are deeply concerned about elephant killings in Aceh,” WCS Indonesia Country Director, Dr. Noviar Andayani said. “We believe that the effort of Aceh police to arrest these traders shows that law enforcement is working in Indonesia.”

“The Wildlife Crimes Unit, in collaboration with the Indonesian authorities, has a remarkably impressive track record of arrests and prosecutions for violators of wildlife crimes,” said WCS Executive Director for Asia Programs, Joe Walston. “They clearly demonstrate that through a combination of commitment and intelligence Indonesia can win the war against wildlife crime, which is robbing Indonesians of their natural heritage.”

The two suspects in the police department after their arrest. Photo credit: WCS