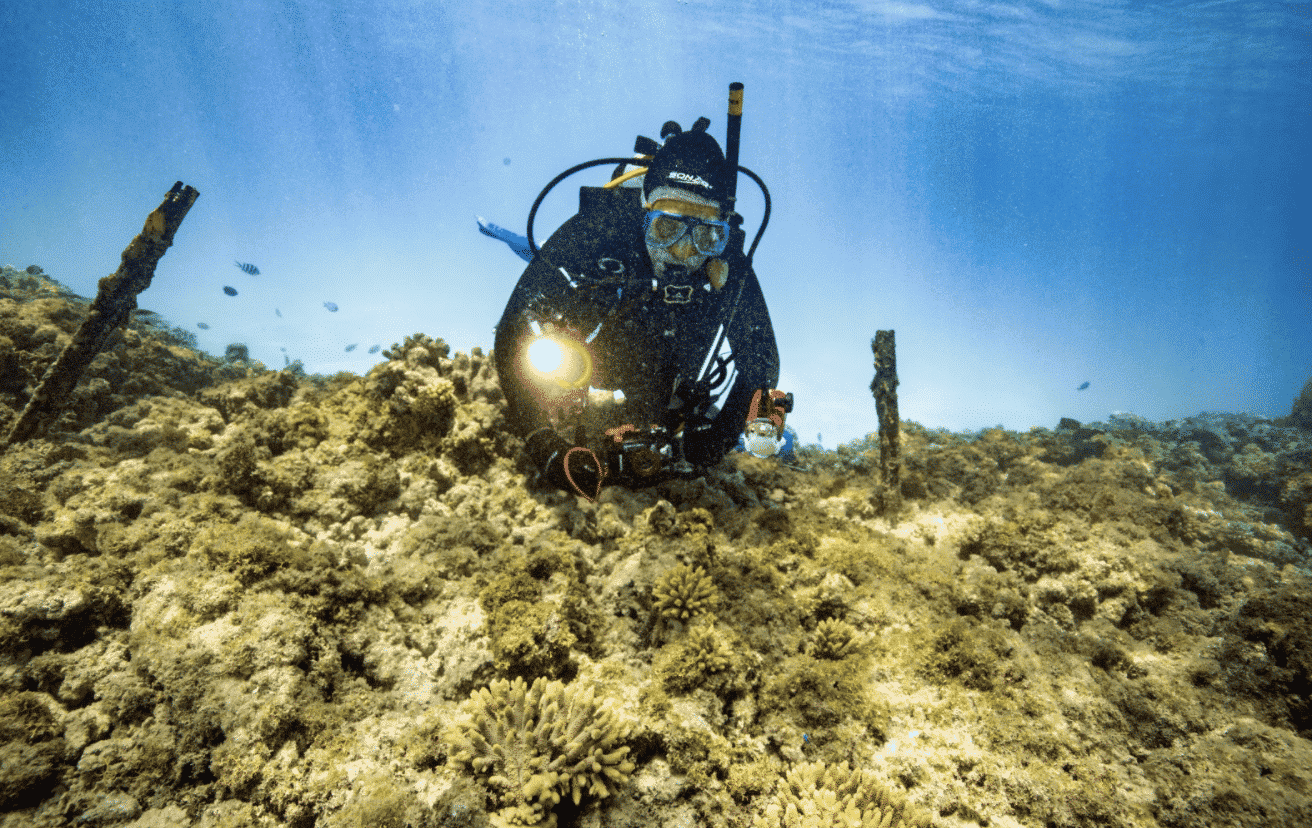 Professor Peter Harrison with the IVF corals that were first planted in 2016 and spawned for the first time this year. Southern Cross University

There’s hope that an innovative idea may have what it takes to help save the beleaguered Great Barrier Reef.

For the first time, Coral IVF babies have themselves reproduced on a previously degraded reef, the Great Barrier Reef Foundation (GBRF) announced Monday.

“We couldn’t be more excited to see that these coral babies have grown from microscopic larvae to the size of dinner plates, having not only survived a bleaching event but are now reproducing themselves – helping to produce larvae that can restore a degraded reef,” GBRF Managing Director Anna Marsden said in the announcement.

The iconic Great Barrier Reef is under threat because of the climate crisis. The reef has suffered five mass bleaching events since 1998, when warmer than normal water temperatures force the coral to expel the algae that gives them food and color. A recent study found that only two percent of the reef had remained unscathed from these events.

To try and save the reef, GBRF has developed an innovative strategy known as Coral IVF to grow baby corals that can then help repopulate damaged reefs.

“Our researchers capture coral eggs and sperm, called spawn, from healthy reefs and rear millions of baby corals in specially-designed floating pools on the Reef and in tanks. When they are ready, we deliver them onto damaged reefs to restore and repopulate them,” GBRF explained.

The foundation has been testing this innovation by planting IVF corals on damaged corals near Queensland, Australia’s Heron Island, The Sydney Morning Herald reported. The IVF corals were first planted in 2016 and spawned for the first time this year.

Southern Cross University coral specialist Peter Harrison told The Sydney Morning Herald that he had tested the idea successfully in Singapore, but this is the first time it has worked on the Great Barrier Reef.

“On the Great Barrier Reef, this is the first time – the first cycle – where anyone has been able to show the growth of corals right from larvae settling on the reef through to the reproductive aspects,” he told The Sydney Morning Herald.

The Coral IVF trial led to the birth of 22 colonies that have already survived a bleaching event and grown to maturity, GBRF said.

The corals grown with the Coral IVF process are more resilient to bleaching because they are grown in nurseries alongside an algae called zooxanthellae that has been lab grown to have a higher than usual tolerance for heat, New Atlas explained. It is also paired with the coral larvae earlier than it would be in the wild. This means the corals are more likely to survive because they have more energy and grow faster.

The next step is to expand this innovation.

“We’ve calculated that we would need to start developing tens or hundreds of million of these juvenile corals to start getting to very large scale,” Professor Harrison told The Sydney Morning Herald. “All of that is doable.”

Ultimately, the successful trial is good news for the reef as a whole.

“Saving the Reef is a huge task, but having proof that this innovative, cutting-edge science works gives us hope,” Marsden said in the GBRF announcement.