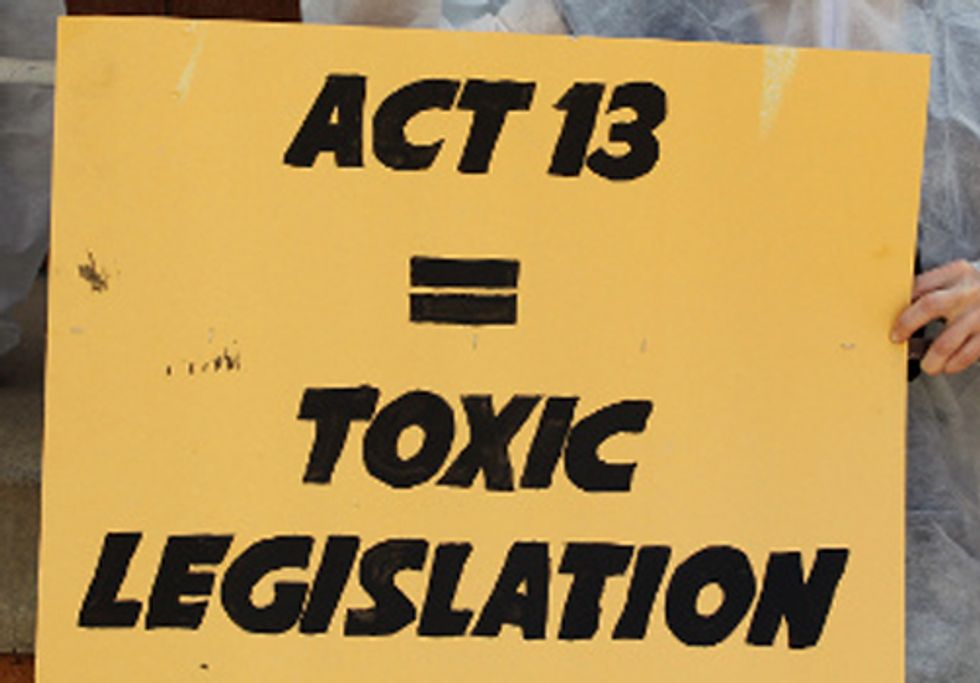 Community leaders and activists from across the Philadelphia area praised the Philadelphia City Council’s resolution yesterday opposing Pennsylvania Act 13. The resolution opposes Act 13 and affirms the Commonwealth Court’s decision to strike down a portion of that law that attempted to strip all state municipalities of their ability to protect the health and safety of their residents by passing bans, moratoria or even the most moderate zoning restrictions on any aspect of heavy industrial shale gas drilling.

Councilman Curtis Jones, Councilwoman Blondell Reynolds Brown and Councilman Kenyatta Johnson co-sponsored the resolution. Up to 200 opponents of shale gas drilling have attended several City Council hearings in Philadelphia, including one in March 2011 focused on pressing the Delaware River Basin Commission to maintain its moratorium on fracking.

The resolution approved by City Council supports the Commonwealth Court decision which found Act 13 unconstitutional because it removes the ability of local governments to legislate to protect the health, safety and welfare of its residents with regard to gas and oil operations. The legal challenge to the law was brought by seven municipalities, the Delaware Riverkeeper Network and Dr. Mehernosh Khan in March.

In July, the Commonwealth Court declared the municipal preemption provisions of Act 13 null, void and unenforceable and allowed an injunction on its implementation to remain in place while the case proceeds to the Pennsylvania Supreme Court. Philadelphia City Council joins more than 70 local government units supporting the overturning of the law and several “Friends of the Court” who have filed amicus briefs in defense of the Commonwealth Court ruling.

“Philadelphia City Council has taken decisive action today to protect the drinking water for its residents and the region by casting a vote against Act 13, the law that pushes gas and oil operations into every corner of every municipality in the state. The City is throwing its support behind the communities of Pennsylvania instead of drilling and fracking special interests. This critical support is much appreciated as we go to the Supreme Court to defend the overturning of Act 13,” said Maya van Rossum, the Delaware Riverkeeper, an original plaintiff in the lawsuit.

“Act 13’s attack on democratic rights, health and safety managed to outrage a broad spectrum of the population from firefighters to farmers, including the great city of Philadelphia, which happens to be full of people who drink water, breathe air and recognize a terrible law when they see one. The Philadelphia City Council has done a great job of standing with residents and environmental advocates across the state in opposing this unjust law,” said Iris Marie Bloom, executive director of Protecting Our Waters. “We’re delighted to see the council once again show positive leadership and resist fracking.”

“With today’s resolution, the Philadelphia City Council has asserted what should have been obvious to Governor Corbett and the state legislature: municipalities have a constitutional right to regulate activities within their bounds, especially when it comes to inherently dangerous practices such as hydraulic fracturing,” said Sam Bernhardt, an organizer with Food & Water Watch, a consumer rights group. “It should also be obvious to the governor that the people of Pennsylvania have a right to clean air and clean water, rights that fracking doesn’t allow for.”

“City Council’s vote to oppose Act 13 sends a clear message that Philadelphia defends a Pennsylvania municipality’s right to make decisions that protect residents’ public health and quality of life. City Council recognizes how imperative it is for local governments to have the power to decide where, or even if, the shale gas industry can operate equipment that emits air pollution in people’s backyards and that accelerates climate change,” said Matt Walker, community outreach coordinator with Clean Air Council.

Complete text of the Resolution is available from City Council or by clicking here.