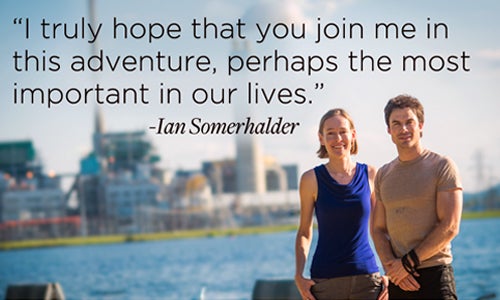 I would never argue that we should ignore the problems being caused by climate disruption around the world—we need to acknowledge and take responsibility for them. But I believe it’s equally important to tell some other parts of the story: That we are not powerless and that we have solutions we can start using now. 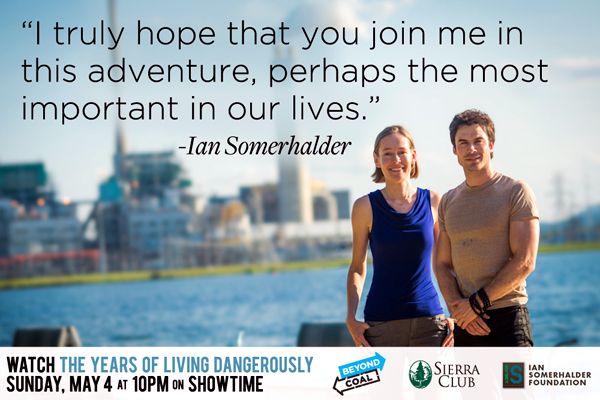 The opportunity to do that is one reason why I was thrilled to participate in the Showtime documentary series Years of Living Dangerously. Although the program doesn’t shy away from the dangers we face if we don’t take action on climate disruption, it also introduces us to some of the inspiring people who are doing what only people can do: Making a dent in the universe.

For the show, I travelled to Asheville, NC, where I met people of all ages and from all backgrounds who are fighting to protect their most basic resources: clean air and safe drinking water. The local utility company, Duke Energy, had been accused of improperly disposing of waste from a coal-burning power plant, leaving toxic ash to contaminate drinking water and the historic French Broad River. After people in Asheville got organized and raised their voices, Duke Energy announced for the first time that it would consider phasing out the plant—a huge victory! Now, Asheville residents are joining with clergy and people of faith from across North Carolina to take their message to the Duke Energy shareholders meeting in Charlotte.

Why is the coal issue so important? Because coal-fired power plants are the biggest source of global warming pollution, both here and abroad. They’re killing our planet. At the same time, those plants cause of a lot of other misery. Here in the U.S., the acid rain, ozone and smog from these plants exacerbates children’s asthma and causes thousands of premature deaths—every year. More than 40 percent of Americans live in areas with unhealthy air, as coal plants emit sulfur dioxide, nitrogen oxide and even the mercury that ends up in our waterways and (eventually) our tuna sandwiches.

Fact: Neither solar nor wind power has ever caused an asthma attack or heart failure. Clean energy not only will reduce emissions, it will save thousands of lives. Even without the urgent necessity of addressing global warming, switching to renewables should be a no-brainer for health reasons alone.

That’s especially true since, it turns out, we don’t actually need to keep pursuing the dangerous and toxic fossil fuels that make people sick, pollute our air and water, and fuel extreme weather. We have better ways of doing things, and we already know that they work.

That’s right, clean, renewable energy is already here and already making a difference. In many places, wind and solar are replacing fossil fuels not just because renewables are cleaner and healthier, but because they make more sense economically. After all, when your energy source is free and inexhaustible, you have a leg up on the competition. That’s why Minnesota’s Public Utilities Commission recently chose to a develop a distributed solar photovoltaic project over competing proposals for natural gas plants to meet new power generation needs. The solar turned out to be a better value for customers.

The biggest mistake we could make would be to think that by adopting clean energy, we are somehow giving something up. In fact, every fossil fuel energy source we replace with a clean energy solution brings us that much closer to a healthy, thriving world.

The promise of renewable energy and the work of people like Asheville’s “move beyond coal” activists are more than enough to keep me hopeful. So let’s double down on solar energy. Let’s build more wind turbines. Let’s be more energy-efficient and weatherize our homes. Let’s build a healthy economy based on good-paying, clean energy jobs that benefit our communities. Because every step we move forward on this path is one that we’ll never have to retrace. Once we get clean energy, there’s simply no way we’ll ever want to go back to the old way of doing things.

Tune in to Years of Living Dangerously, Sunday at 10 p.m. ET/PT on Showtime.

Years of Living Dangerously,Years of Opportunity