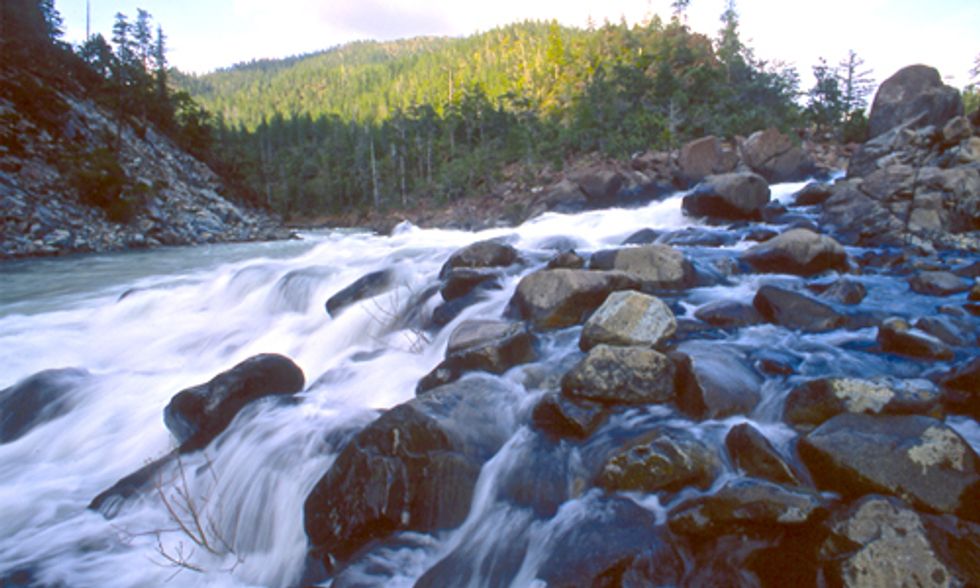 Imagine having transportation being governed by laws passed before cars were invented. Or communications dictated by edicts predating telephones. Or public lands managed by rules passed when national forests didn't even exist.

Written when sourdoughs were swinging pickaxes to chip away at their elusive fortunes, the Mining Law of 1872 remains in effect, though equipment six-stories tall can now remove entire mountaintops in a matter of days. With full protection of the law, foreign interests claim public land belonging to all Americans and preempt it for their own profits. Mining companies have bought hundreds of thousands of acres of public land for prices frozen during Ulysses S. Grant's presidency at less than $5 per acre.

The North Fork Smith of California is threatened by new nickel mine proposals under the Mining Law of 1872. Photo credit: Tim Palmer

Revenues enriching the extraction companies total in the hundreds of billions, but not a dime in royalties have been paid for these minerals taken from National Forest or Bureau of Land Management property. Safeguards to protect everyone's water, air and vistas are totally absent from the Mining Law. It enables faceless corporations to deplete our land and pollute our streams and then retreat to their nether land of offshore unaccountability when the bills come due. Declaring bankruptcy is easy and common once the profitable mining is done.

Just because a law is old doesn't mean it's bad. But here we're not talking about the Constitution or the Bill of Rights. Rather, the mining directive was steeped in corruption when it passed, and it has only become more toxic with the passage of time, with the growth of technology, and with the greed of globalism.

This statute's "rationale"—to use the term loosely—was based on the "need" to open the West to settlement. Since then, the crossroads of Los Angeles, Seattle, and Portland have become the cities we know. When the law was passed, wagon travel on the Oregon Trail was the primary means of crossing the country. But the Mining Law remains, just as potent as ever in its destructive power.

According to the U.S. Environmental Protection Agency, mining under this rubric now pollutes 40 percent of the headwaters of western waterways with toxic chemicals that ruin our urban and farm water supplies, fisheries, recreation sites and backyards. To clean up the mess, taxpayers would have to shell out $50 billion.

The Illinois of Oregon is threatened by new nickel mine proposals under the Mining Law of 1872. Photo credit: Tim Palmer

To be clear, gravel mining, coal mining and drilling for oil and gas are covered by updated laws. But those who excavate open-pits for copper or decapitate entire mountaintops for a bit of nickel or other "hard rock" minerals get a free ride on taxpayers' backs. Proposals for mines of these types now typically come from foreign corporations.

Reform of the Mining Law is urgent throughout the West. Even in Oregon—one of the less-mined states—lands and waters have endured wreckage at sites such as the Formosa Mine—easily seen on Google Earth near Riddle, south of Roseburg—with its lead, zinc, cadmium and other poisons leaking into Umpqua River tributaries. Here the public costs of cleanup are estimated at $20 million. A Canadian corporation declared bankruptcy and abandoned that mine in 1993, now a Superfund toxic waste site.

This legacy is repeated dozens and hundreds of sites across the west. And perhaps more importantly, threats loom for uncontrolled new mines. Proposals menace iconic streams such as the Illinois and Rogue of Oregon and the Smith of California. Stripping for nickel at those sites would pollute some of our finest salmon and steelhead waters—resources that communities and whole regions depend upon. This archaic law binds us to the same mistakes tomorrow that we've been making for 142 years.

Congressman Peter DeFazio of Oregon has introduced legislation to reform this relic of a long-gone era. Do we really have to live under a law based on a misguided choice in 1872? Let's get over it.

Tim Palmer is the author of Field Guide to Oregon Rivers, Rivers of America, Rivers of California and other books.

America’s Beloved River Up for Grabs