It’s So Hot in Texas That Shoes Are Literally Melting 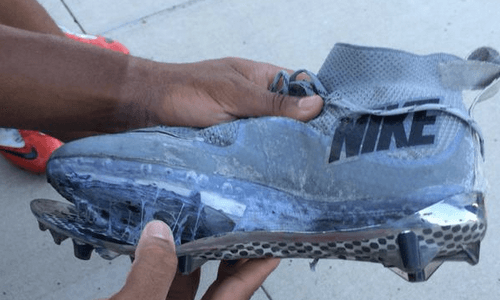 Summer is coming to an end but the relentless heat has not. Temperatures soared to 106 degrees in the city of Allen, Texas this week, causing a high school football player’s shoes to literally melt.

According to USA TODAY, Eagles defensive back Anthony Taylor’s Nike cleats melted during practice. The image above was captured by Taylor’s athletic trainer, Mike Harrison.

The Dallas News reported that Monday was the hottest first day of high school football practice in the last 13 years, and local coaches have advised players to prepare accordingly for the searing temperatures.

The area’s high school teams were also prohibited from practicing from Noon to 6 p.m. when practice would have been prohibitively hot.

“We researched literature and talked to institutions and universities,” Phil Francis, the head athletic trainer for the Dallas Independent School District athletic department, told Dallas News. “[Noon-6 p.m.] is getting to be the hottest part of the day. This is preseason. Kids need to get used to the hot weather.”

It’s not the first time that an athlete’s shoes have melted from the oppressive heat. Tennis player Jo-Wilfried Tsonga’s shoes also melted during delirious 107.6 degree temps at the 2014 Australian Open. And with this year on track to be the hottest in recorded history, other folks have also taken to Twitter to express dismay about the shoe-melting phenomenon:

Nothing I haven’t seen or experienced before. This is Texas, if your shoes aren’t melting then it’s probably Winter. https://t.co/rkalfp2G8D — Michelle Frasch (@michelle785) August 12, 2015

Arizona so hot the bottom of my shoes be melting