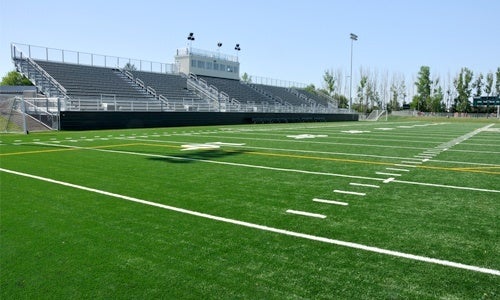 Extreme heat this summer has led to roads and shoes melting and now “all-weather” fields too. Five high schools with all-weather fields in Los Angeles are being forced to replace their fields because they keep melting. The turf is being replaced because of “defective materials,” an LA district official told The Los Angeles Times, but California’s record heat certainly has not helped.

Synthetic turf has become very popular in the last decade as a way to save money in water and maintenance costs, but installation costs can be very high—nearly $2 million, according to The Los Angeles Times. Not only are the installation costs high, but parents and school officials have also raised concerns about the health impacts of synthetic turf on children, including the risk of cancer. In response to these concerns, LA schools are phasing out materials from recycled tires on its turf fields.

The pellets used in this instance were a type of plastic known as TPE, which were supposed to withstand heat up to 180 degrees, but in tests had melted at 140 degrees. LA hasn’t seen air temperatures get quite that high, but “synthetic fields absorb heat, resulting in surface temperatures much higher than measured in the surrounding air,” explains The LA Times.

“Pellets were melting big time,” said former football coach Jim McElroy at Diego Rivera high school. “It looked like a bunch of gum all over the place.”

It’s going to cost between $500,000 and $800,000 to replace the synthetic fields, for which the school district hopes to be reimbursed by the manufacturers. The school district told The LA Times it plans to continue to use the synthetic turf because “it has partners willing to share the cost and upkeep” and “more games can be played on synthetic fields than grass fields, which can be quickly worn out by weather and use.”

It’s not just LA, either. Record heat is scorching high school fields around the country. One Texas high school athlete’s cleats (pictured in the Tweet above) melted during practice a few weeks ago in the Lone Star state. And people from around the country have been complaining on Twitter that it’s so hot, they feel like their shoes are about to melt.