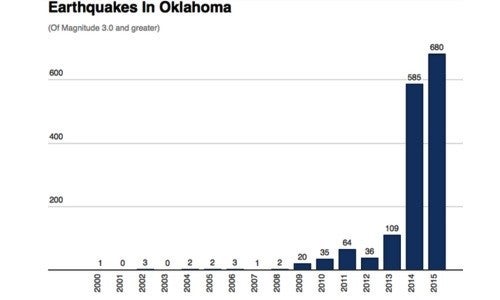 It’s official: Oklahoma now has more earthquakes than anywhere else in the world, according to a spokesman from the Oklahoma Corporation Commission (OCC), which oversees the Sooner State’s oil and gas industry.

“We have had 15 [earthquakes] in Medford since 5 o’clock Saturday morning,” said spokesman Matt Skinner on Nov. 9, according to the Enid News. “We’ve got an earthquake issue.”

“OCC has developed areas of interest, where earthquake clusters have occurred. A cluster is two earthquakes within a half mile of each other, with one measuring at least magnitude 3.2. Originally, they were three-mile circles, then six-mile circles. The circles grew in number and now encompass a very large area of Oklahoma—about 9,000 square miles in all, [Skinner] said,” reported the Enid News.

Scientists have linked this never-ending spate of tremors to the state’s drilling boom. The Oklahoma Geological Survey concluded that the injection of wastewater byproducts into deep underground disposal wells from fracking operations has triggered the seismic activity in Oklahoma.

As EcoWatch reported two months ago, Oklahoma went from two earthquakes a year before 2009 to two a day. This year, roughly 700 earthquakes of magnitude 3 or higher has shook the state, compared to 20 in 2009.

The tremors are such a frequent occurrence that the OCC has forced changes to 500 disposal wells around the state, including the shut down of wells around the city of Cushing, which holds one of the largest crude oil storage facilities in the world.

The OCC is requiring well operators to show that water is not being injected below the state’s deepest rock formations, which is believed to contribute to the earthquakes.

Incidentally, Oklahoma has about 4,500 disposal wells with about 3,500 still in operation, so these regulations only applied to a small fraction of the wells.

Skinner said the Oklahoma Geological Survey has seen an overall reduction in earthquakes. However, he noted, “Now, this weekend may have blown that out of the water, I don’t know.”

“Again, based on the data, it would appear that even if you do the right thing, it’s going to take a long time,” he said. “There’s no quick off switch.”

However, Fallin is still weighing some of the pros and cons of fracking in her state. Oklahoma is one of the top natural gas-producing states in the country, and the sector provides a significant number of jobs in the state.

“We want to do it wisely without harming the economic activity we certainly enjoy and the revenue, quite frankly, we certainly enjoy,” Fallin said. “The council has worked very hard to ensure the energy sector, state agencies, environmentalists and academia are all talking and sharing that data and we have a scientific-based approach to reducing seismicity in our state.”

Many Oklahomans are worried that, one day, a damaging earthquake could strike. Fallin’s advice to residents is that “they should call their insurance agent and see what types of products are available,” to protect themselves. This advice from the governor was unsurprisingly met by criticism.

“It really appears to me we are protecting the industry in this state,” Spotts said. “Their jobs are important. But my home and all the people I speak for that don’t have the courage to stand up and speak out, our lives, homes, property and well-being is every bit as important as the jobs in the oil and gas industry. And I sincerely don’t believe the actions have been quick enough and fast enough and protecting from one of the big ones from happening.”