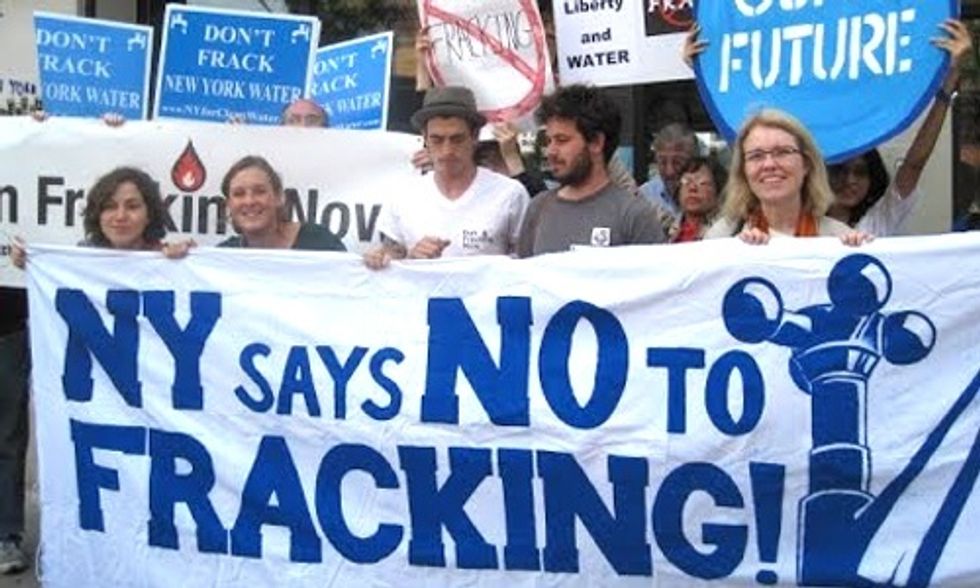 "After years of exhaustive research and examination of the science and facts, prohibiting high-volume hydraulic fracturing is the only reasonable alternative," said New York's Department of Environmental Conservation Commissioner Joe Martens in a statement. "High-volume hydraulic fracturing poses significant adverse impacts to land, air, water, natural resources and potential significant public health impacts that cannot be adequately mitigated. This decision is consistent with DEC's mission to conserve, improve and protect our state's natural resources, and to enhance the health, safety and welfare of the people of the state."

Today, representatives of New Yorkers Against Fracking, Frack Action and the Sierra Club delivered this giant “Thank You” scroll signed by hundreds of state residents to the 2nd floor of the Capitol Executive Chamber.

The Findings Statement concludes that "there are no feasible or prudent alternatives that adequately avoid or minimize adverse environmental impacts and address risks to public health from this activity." Two groups heavily involved in the campaign, New Yorkers Against Fracking and Americans Against Fracking, praised the decision.

Mark Ruffalo, an advisory board member of Americans Against Fracking, worked diligently to ban fracking in his home state and recently made an appearance on The Daily Show with Jon Stewart to encourage the U.S. to go 100 percent renewable by 2050. In a statement on the finalization of New York’s ban on fracking, Ruffalo said:

I applaud the Cuomo Administration for protecting the public health and safety of New Yorkers by finalizing the ban on high volume fracking. Governor Cuomo has set a precedent for the nation by carefully considering the science, which shows a range of public health and environmental harms, and doing what's best for the people, not the special interests of Big Oil and Gas. Already, other states and countries are following New York's lead, with prohibitions including Maryland, Scotland, Wales and just today a crucial county in England. Along with many New Yorkers, I look forward to working on advancing renewable energy and efficiency, showing the world that a cleaner, healthier, renewable energy future is possible. Today I'm proud and thankful to be a New Yorker.

“Today, nearly a year to the day after communities won the right to ban fracking, New York’s historic statewide ban on fracking is now the law of the land," says Earthjustice Managing Attorney Deborah Goldberg, who represented the town of Dryden, New York, which won its precedent-setting fracking ban case one year ago tomorrow. "We salute Governor Andrew Cuomo’s refusal to bow to industry pressure. He had the courage to do what no other state or federal leader has had the courage to do: let the available scientific evidence dictate whether fracking should proceed in New York."

New York now joins Vermont in outlawing the practice altogether, which has been banned in the Green Mountain state since 2012. As Ruffalo mentioned, this spring Maryland approved a moratorium on fracking in the state until October 2017. Scotland and Wales have also instituted moratoriums. And today a county in England rejected applications for fracking permits, which the Wall Street Journal says "effectively extends the moratorium on fracking in the U.K." Meanwhile, Texas and Oklahoma both passed legislation this spring, barring local municipalities from instituting fracking bans.

"New Yorkers can celebrate the fact that we won't be subjected to the toxic pollution and health risks fracking inevitably brings," said Alex Beauchamp, northeast region director for Food & Water Watch. "By banning fracking, Governor Cuomo stood up to the oil and gas industry, and in so doing became a national leader on health and the environment. He set a standard for human health and safety that President Obama and other state leaders should be striving for."

Hey Bill Nye, Are You For or Against Fracking?