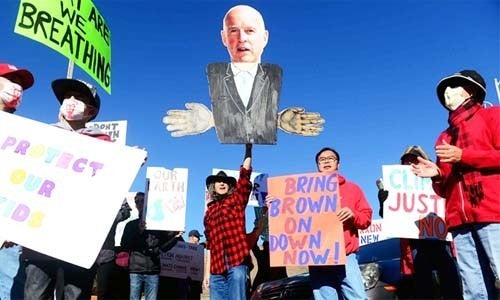 Following months of pressure from activists and residents, California Gov. Jerry Brown on Wednesday issued a state of emergency over the Porter Ranch gas leak that has been pouring tens of thousands of kilograms of methane into the air surrounding the community since October 2015.

The order means “all necessary and viable actions” will be taken to stop the leak and ensure that the Southern California Gas Company (SoCal Gas), which owns the leaking natural gas injection well, is held accountable for the damage. 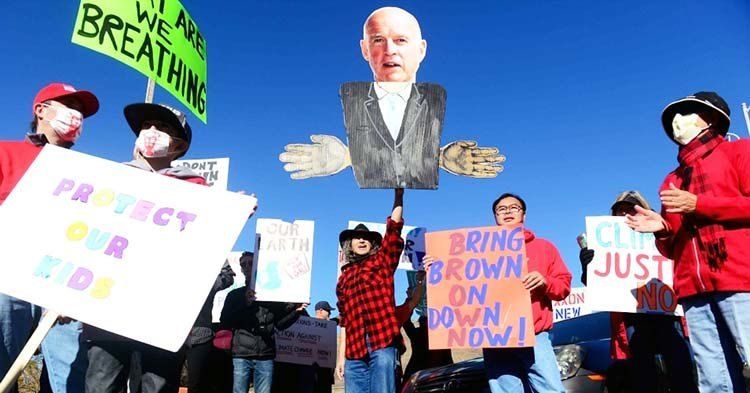 Brown issued the state of emergency after making a quiet visit to the area earlier this week to tour the facility and meet with the Porter Ranch neighborhood council. Wednesday’s order also directs action to protect public health, according to a press release issued from the governor’s office.

“It is really going to … amplify the urgency of this issue and really expose how bad the problem is,” Nagy said.

The leak, which has been ongoing since October 2015, gained limited media attention after environmental and public health advocate Erin Brockovich declared it “a catastrophe the scale of which has not been seen since the 2010 BP oil spill.” Residents living in proximity to the well, which is situated in Aliso Canyon, roughly 30 miles northwest of Los Angeles, reported having symptoms of methane exposure, including headaches, nausea and in some cases, bleeding eyes and gums.

Brown’s hesitance to issue an emergency order in the face of a growing public health crisis raised questions over a possible conflict of interest between the governor and SoCal Gas. Brown’s sister, Kathleen Brown, is a paid member of the company’s board.

On Monday, a constituent affairs representative with Brown’s office told Common Dreams that he was unaware of any plans to declare a state of emergency, stating, “I think maybe he wants to wait until the situation develops a little bit more … state of emergencies are a pretty big deal.”

Nagy credited the swift turnaround to pressure from the community. She stated Wednesday, “We’ve just been mounting pressure from all sides … This is a hard fought win for the residents of Porter Ranch and beyond affected by this noxious blowout.”

“It was interesting that he wanted to do it in the quiet and in the dark, because he doesn’t want to be held accountable publicly and this is his opportunity to look like a hero and a leader on this,” Nagy continued. “He’s moving with it because that’s where it’s going.”

While the order was welcome, activists have a broader objective—to shut down the Aliso Canyon facility and, ultimately, end the state’s reliance on fossil fuels, Nagy said, declaring, “Addiction to natural gas is a problem.”

To that end, activists in the area are organizing a hearing with city officials on Saturday to discuss an order for abatement, which requires companies acting out of compliance to shut down their operations. The order, issued by the South Coast Air Quality Management District, “has the potential to shut down the Aliso Canyon Storage Facility temporarily or permanently,” organizers explained in a Facebook post. “We need to rally and testify at the hearing this Saturday to demand AQMD uses their authority to #ShutItALLDown.”

Activists plan to gather at Granada Hills Charter High School on Saturday for an 8 a.m. rally ahead of the 9 a.m. hearing.

“We are on a path to transitioning to clean energy,” Nagy said. “[The leak has] been a wake-up call for this community … We’re all on the front lines of climate change.”