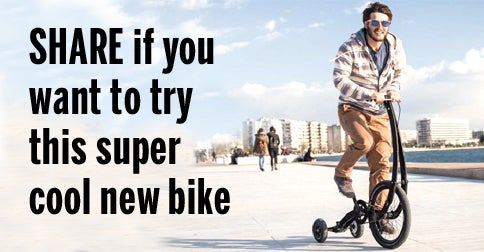 Biking enthusiasts can glide through their city in a whole new way with the Halfbike II, a vehicle that combines both running and cycling at the same time. 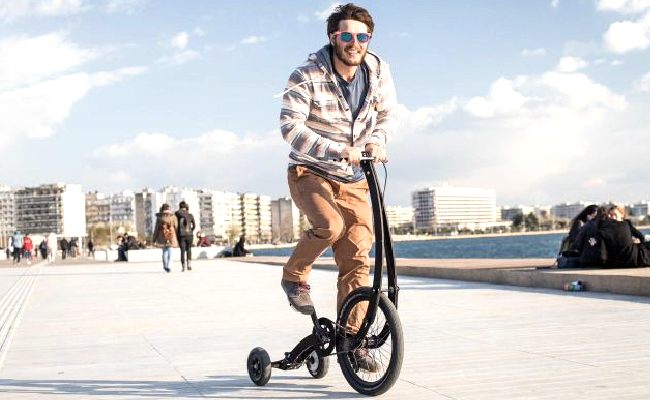 “We took the core driving mechanism of a classical bicycle (a wheel connected to a crankset) but redesigned pretty much everything else,” the Halfbike II makers said. “The result—a vehicle that trains your balance and reflexes in a completely new way.” Photo Credit: Kolelinia

Created by Martin Angelov and Mihail Klenovby of Bulgarian design company Kolelinia, the Halfbike II is a fun alternative to getting around town. Like riding a Segway with pedals, riders hold onto the handlebars for balance and make turns by leaning one way or the other.

“The standing rider position is very close to walking,” Klenov told Dezeen. “It allows the rider to control the Halfbike using his or her whole body instead of just the hands like on a bicycle.”

“Furthermore,” he added, “the spine stays straight and the chest is not constrained between your hands like it is on a bike, which makes using the full capacity of your lungs easier.” 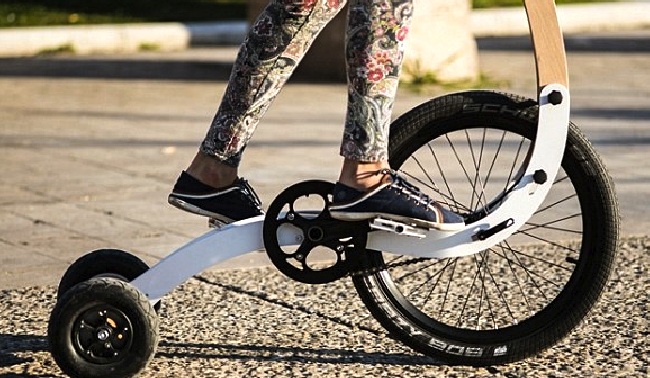 “It brings you closer to natural walking and it’s the only way to control the vehicle with your whole body and not just your hands,” the designers said. Photo Credit: Kolelinia

The Halfbike II consists of a curved aluminum base frame, a plywood handlebar, a large front wheel and two smaller wheels, as well as pedals and a cog and chain mechanism. It’s also a vast improvement from its unstable-looking previous iteration, the Halfbike, where the handlebar connected to the frame in one long rod.

Those riding the Halfbike II will get quite the leg workout, especially uphill. The designers said on their successful Kickstarter campaign that the bike is best suited for riding on flat ground and gentle slopes.

“Going up a steep hill takes some sweat and effort but if you’re looking for exercise you’ll certainly get it,” they joked.

One of the best features of the the Halfbike II is how it’s compact and light, like a scooter. It’s 44 inches tall when standing and weighs under 18 pounds.

It can also be folded, making it easy to take onto public transit, placed into a trunk of a car or stored under a desk or in a closet. When folded, it’s a mere 21 inches tall. 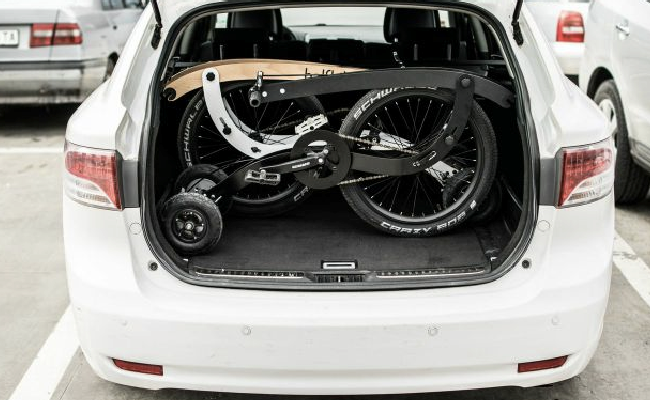 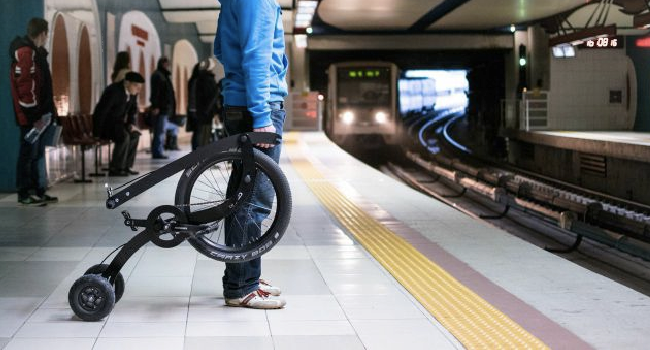 At under 18 pounds, it’s also easy to carry with you around the city as well as through public transportation. Photo Credit: Kolelinia

The designers said they aren’t trying to convince everyone to get rid of their trusty old bike. “The two are so different that they’re actually hard to compare,” they said. “The feeling of riding a Halfbike is really nothing like riding a bicycle. But believe us, you’ll certainly enjoy exactly that difference.”

The Halfbike II is available for purchase via Kickstarter, with shipments starting around July. The company is currently trying to reach their stretch goal of $250,000 in order to add lights and fenders to the ride.

Check out the Halfbike in motion in the video below.