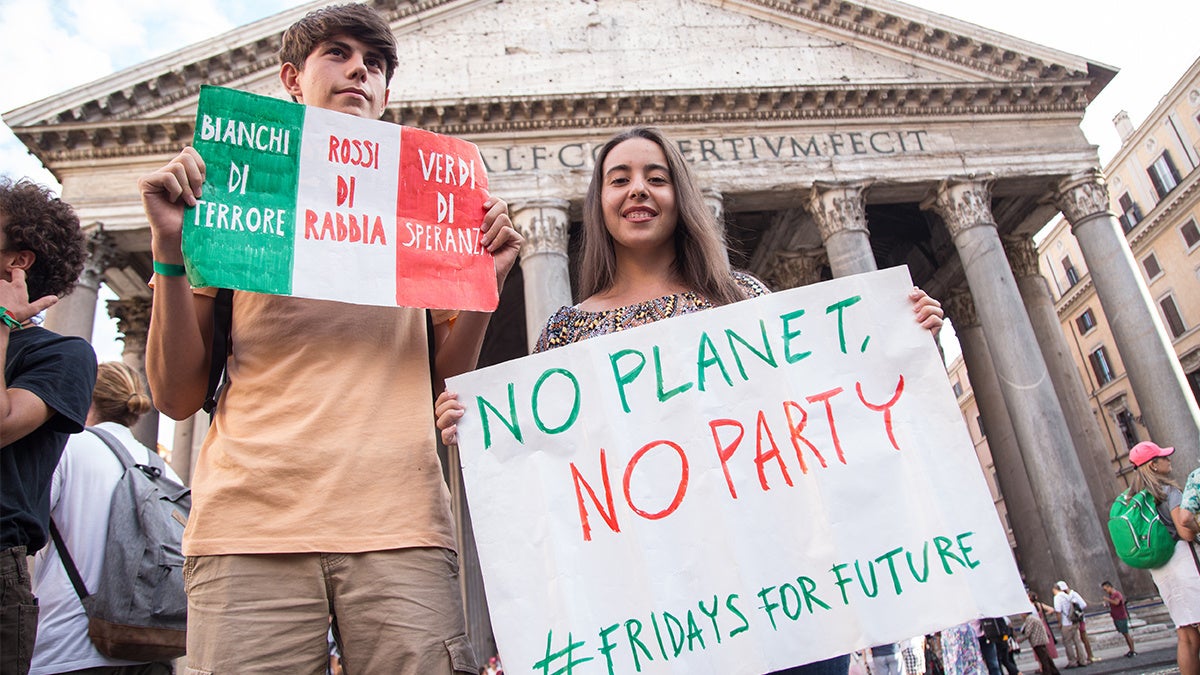 "Fridays For Future" climate activists in Rome, Italy in front of the Pantheon on Sept. 6. Matteo Nardone / Pacific Press / LightRocket via Getty Images

Italy has stepped into the forefront of environmental education by adding the climate crisis and sustainable development as a mandatory part of the curriculum, the country’s education minister announced Tuesday, as The New York Times reported.

Education Minister Lorenzo Fioramonti is the government’s most vociferous advocate for green policies and encouraged students to skip school in September to participate in the global climate strike, according to Reuters.

His new initiative means all state-run schools will tie-in the UN’s 2030 agenda for sustainable development into as many subjects as possible, with one hour each week dedicated to how humans have altered the planet and the causes and effects of global warming. Sustainability will also be incorporated in geography, mathematics and physics, Fioramonti announced, as The Guardian reported.

“The entire ministry is being changed to make sustainability and climate the center of the education model,” said Fioramonti, to Reuters. “I want to make the Italian education system the first education system that puts the environment and society at the core of everything we learn in school.”

The changes will go into effect at the beginning of the next school year, which will start in September 2020. A panel of experts will act as “peer reviewers” as ministry staff prepares the curriculum, which will be ready by January to train teachers, according to Fioramonti. The expert panel will include Jeffrey D. Sachs, director of the Harvard Institute for International Development, and Kate Raworth of Oxford University’s Environmental Change Institute, according to The New York Times.

Fioramonti foresees teaching primary school students, aged 6-11, about the environment through stories and fairy tales from various cultures around the world that recognize a connection with the natural world. Middle schoolers will start to learn more technical details, while high school students will learn about the UN’s 2030 agenda for sustainable development, according to The New York Times.

While environmental advocates praised the initiative, it also drew some caveats, especially about passing the burden of the climate crisis to the next generation.

“Science tells us the next 10 years are crucial,” said Edoardo Zanchini, vice president of Legambiente, Italy’s leading environmental group to The New York Times. “We cannot wait for the next generation.”

Fioramonti has made the climate crisis a top priority since entering the government. He has argued in books that gross domestic product is the wrong measure of a country’s economic health. He proposed new taxes on items with large carbon footprints such as airline tickets, plastics and sugary foods. While he aimed to raise money for education, he faced a backlash since many Italians believe they are already overtaxed, as Reuters reported.

However, the plastic tax and a tax on sugary drinks were both included in the 2020 budget that the government presented to parliament this week.

“I was ridiculed by everyone and treated like a village idiot, and now a few months later the government is using two of those proposals and it seems to me more and more people are convinced it is the way to go,” Fioramonti said to Reuters.