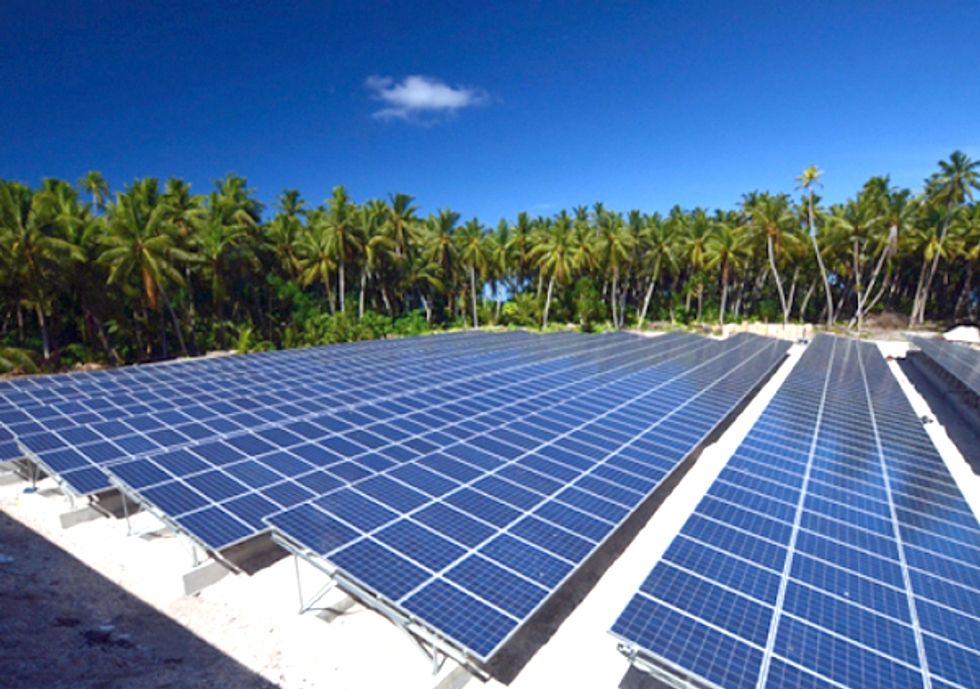 Solar panels have replaced diesel generators on Tokelau, an island grouping in the South Pacific.

Goodbye diesel generators, hello sunshine and coconuts! The remote Pacific island nation of Tokelau, which lies midway between New Zealand and Hawaii and was settled over a thousand years ago, is the first country on the planet to give up fossil fuels and power itself solely by renewable resources.

Previously the island country powered itself by shipping in thousands of barrels of dirty diesel fuel. According to PowerSmart, the New Zealand based company which  installed the Tokelau Renewable Energy Project, diesel generators were burning around 200 liters of fuel daily on each of Tokelau's three atolls, meaning more than 2,000 barrels of diesel were used to generate electricity in Tokelau each year, costing more than $1 million NZD.  Money saved from diesel fuel costs will now be put toward social programs.

Minister of Foreign Affairs for New Zealand, Murray McCully said in a statement: “Until now, Tokelau has been 100 percent dependent upon diesel for electricity generation, with heavy economic and environmental costs.”

PowerSmart Managing Director Mike Bassett-Smith says the company is proud to be leading the project because of the impact it will have on the well-being of the people of Tokelau:

"All across the Pacific there are clear issues with the current and expected future costs of electricity generated using diesel, not to mention the environmental costs and risks of unloading diesel drums on tropical atolls. ... Energy costs underpin the economic and social development of these nations and making a positive impact on these issues is the single most important reason we started this business."

Scotland has set a goal of 100 percent renewable energy by 2020.

In India a climate change movement against fossil fuels has rallied many to embrace clean energy, including the remote village of Sompeta in the state of Andhra Pradesh, to adopt widespread installation of solar PV.

Despite enormous pressure from the heavily subsided, powerful fossil fuels industry, the U.S. has made great strides in developing renewable resources. According to the Renewable Energy Policy Network for the 21st Century, as of 2011 the U.S. was number one in geothermal energy capacity in the world and second in wind power. And we are the fifth largest producer of power from solar PV.

But we have a long way to go if we want to be 100 percent renewable. According to the U.S. Energy Information Agency, approximately 8 percent of U.S. power is now generated by renewable resources. And the U.S. is the second largest consumer of energy, after China, which recently surpassed American energy consumption.

There is an urgent need to combat climate change and get off fossil fuels. Bill McKibben, founder of 350.org, pointed out in his feature piece for Rolling Stone Magazine, "We have five times as much oil and coal and gas on the books as climate scientists think is safe to burn. We’d have to keep 80 percent of those reserves locked away underground to avoid that fate. Before we knew those numbers, our fate had been likely. Now, barring some massive intervention, it seems certain." McKibben is working hard to get these facts out to Americans during his Do the Math Tour.

Fortunately, there's reason for hope. Think Progress reported that renewable electricity nearly doubled under the first Obama administration. And in 2011, global investments in renewable energy surpassed investments in fossil fuels for the first time. Since 2004, one trillion dollars have been invested in the global clean energy sector.