Isaias Projected to Become Hurricane as it Approaches Carolinas 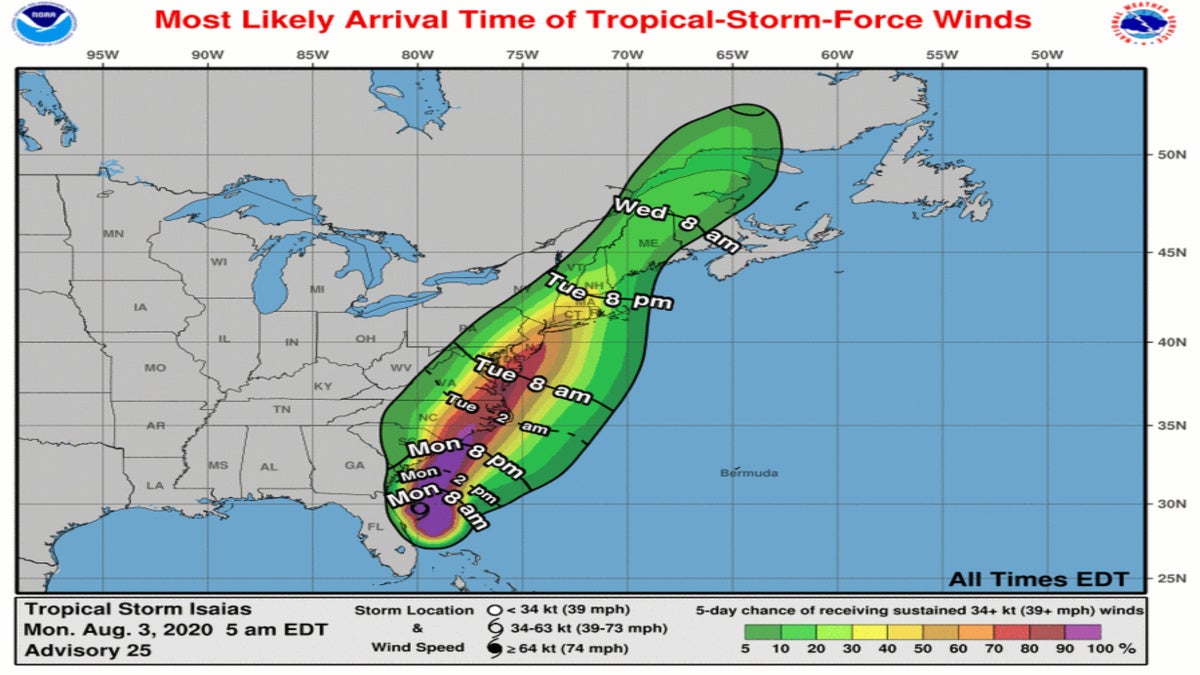 Isiais now approaches the Carolinas, and is expected to strengthen into a hurricane again before reaching them Monday night. NOAA

Florida was spared the worst of Isaias, the earliest “I” storm on record of the Atlantic hurricane season and the second hurricane of the 2020 season.

The storm’s projected path had prompted fears that Floridians would have to evacuate in large numbers as the state struggles to contain the coronavirus pandemic. But Isaias weakened to a tropical storm Saturday afternoon, ABC 11 reported. It also remained offshore, drenching parts of the Florida coast with rain but largely sparing the state, according to USA TODAY.

Tropical Storm #Isaias no longer expected to restrengthen into a hurricane. 🌀

The vertical wind shear shredder has effectively prevented the storm from intensifying.

Florida dodged a bullet for sure!

However, Isiais isn’t done with the U.S. yet. It now approaches the Carolinas, and is expected to strengthen into a hurricane again before reaching them Monday night, CNN reported.

“A Storm Surge Warning means there is a danger of life-threatening inundation, from rising water moving inland from the coastline, during the next 36 hours in the indicated locations,” NHC explained.

Here are the 5 am EDT Monday, August 3 Key Messages for Tropical Storm #Isaias. For the full advisory on #Isaias, visit https://t.co/msBl4Q94BF pic.twitter.com/pzlDkJe59k

The North Carolina coastal communities of Ocracoke Island and Hatteras Island were evacuated Friday ahead of the storm, CNN reported.

“Right now we’re hoping this storm will not hit us hard if it hits at all,” McMaster said in the CNN story. “At this time we have no intention at all of declaring any sort of evacuation.”

Isaias is expected to slowly weaken after making landfall and then travel north. It will bring strong winds to Washington, D.C., Philadelphia and New York, impacting the Mid Atlantic states on Tuesday and New Hampshire and Maine on Wednesday.

Along the way, storm surges and winds aren’t the only threat.

“Heavy rainfall from Isaias will result in flash and urban flooding, some of which may be significant in the eastern Carolinas and the mid-Atlantic, through Tuesday night near the path of Isaias up the East Coast of the United States,” NHC wrote.

There is a moderate risk of flash flooding across portions of the eastern Carolinas and Mid-Atlantic states from #Isaias during the next several days, based on rainfall forecasts from @NWSWPC. https://t.co/DTakqmPfzp pic.twitter.com/D2LrkbEwuB

Tornadoes could touch down in coastal South Carolina Monday and eastern North Carolina into Tuesday. Twisters are also possible from eastern Virginia to southern New England on Tuesday.

Before Isaias reached the U.S., it knocked down trees and tore off roof shingles in the Bahamas, Al Jazeera reported. Some residents of Abaco and Grand Bahama Islands, who were still living in temporary shelters following last year’s devastating Hurricane Dorian, had to be evacuated ahead of the storm.

“With everything not quite shored up, property not secured, homes not prepared, even a category one will be enough to set them back,” Bahamas Mercy Corps Director Paula Miller told The Associated Press, Al Jazeera reported.