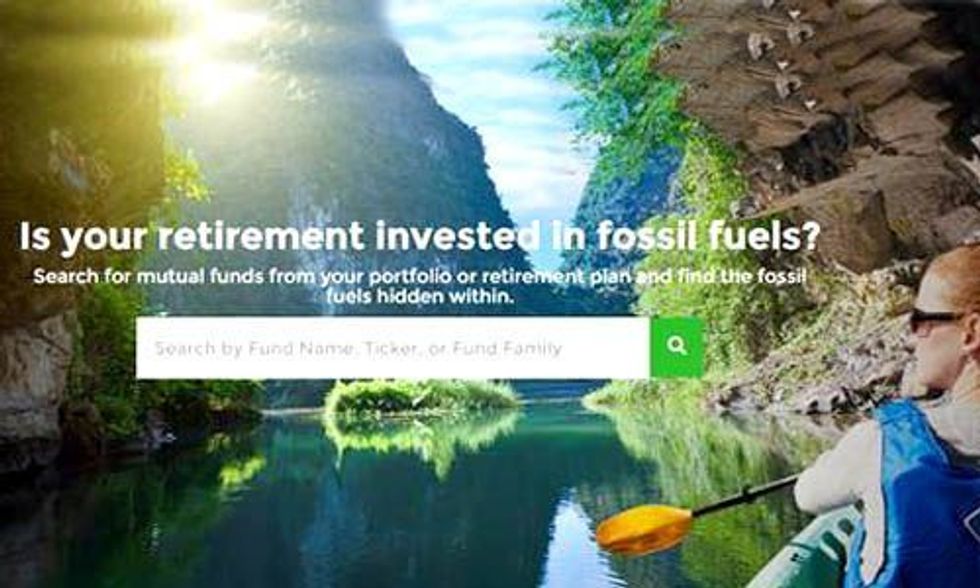 With more than 91 million Americans having $5.6 trillion invested in the five major fund families that control recordkeeping at 75 percent of all employer-sponsored retirement plans, you've got to figure that many people are investing in companies not aligned with their values. With divest from fossil fuel campaigns gaining significant momentum, even if you want to divest from carbon, how can you really be sure your money is invested in companies you want to see prosper?

Fortunately for people that want to make sure their money isn't underwriting the fossil fuel industry, a new free-to-the-public web tool is now available—FossilFreeFunds.org. Launched today by the shareholder advocacy nonprofit As You Sow, Fossil Free Funds is the first website that allows investors to compare mutual funds' holdings against the Carbon Underground 200 list—the 100 largest coal and 100 largest oil/gas companies—fossil-fired utilities and coal holdings. With a tool this powerful, people can now rest assured that their investments aren't contributing to climate change.

And, for those interested in joining the thousands of foundations and individuals, with assets totaling more than $50 billion, as of September 2014, to take the Divest-Invest pledge to decarbonize their investments, stripping these companies from one's portfolio is the minimum requirement.

“Since the beginning of the divestment movement, investors have been clamoring for transparency and a way to identify how they can use their portfolios to actively combat climate change," said Andrew Behar, As You Sow's CEO. “We developed FossilFreeFunds.org after we realized that our own 401(k) was composed of mutual funds that had major oil, gas and coal extraction companies—but we had no idea. We figured that if we didn't know, then probably no one did. This tool gives everyone the power to truly know what they own, so they can own what they own."

As You Sow uses Morningstar fund holding data in collaboration with Carbon Underground 200, Carbon Tracker Initiative, BrightScope and HIP investor. The online tool reveals where fossil fuel holdings are hiding in 1,500 of the most-held mutual funds. Since the five major fund families—including Fidelity, Vanguard and TIAA-CREF—do not offer any diversified mutual funds that are socially responsible and free of the 200 largest fossil fuel companies, consumers have lacked the information and transparency they need to make adequate decisions about where to invest their money.

“With comprehensive fund holdings data, we are able to provide greater transparency and help investors better evaluate the sustainable and ethical effect of their investments," said Joanna McGinley, head of global redistributor solutions for Morningstar. According to Julie Fox Gorte, senior vice president for sustainable investing at Pax World Management LLC, “There are many things investors can do to address the risks created by climate change, especially the risks created by combustion of fossil fuels. One is to avoid fossil fuel stocks."

Here's an example of searching the SPDR S&P 500 ETF on FossilFreeFunds.org:

According to a survey conducted earlier this year by the Morgan Stanley Institute for Sustainable Investing, 71 percent of active individual investors describe themselves as interested in sustainable investing, while nearly 65 percent believe sustainable investing will become more prevalent over the next five years, with millennials and women at the forefront of sustainable investing. The Fossil Free Funds tool helps empower these consumers to get to the bottom of where oil, gas and coal investments are hiding in their portfolios, so they can sell mutual funds that don't align with their objectives and reinvest in funds that do, or work with their financial advisors to divest and reinvest.

But what happens if employees options don't provide a fossil free alternative? Consumers can download a 401(k) toolkit to help them advocate with their retirement plan administrators to include fossil free investment options.

According to Fox Gorte, "At some point, fossil fuels will be stranded assets; this is already happening to coal, the dirtiest of fossil fuels. Michael Bloomberg recently noted that in his blog, 'Obama Didn't Kill Coal, the Market Did.' Citigroup recently reported that if we are to limit future warming to 2ᵒ C, $100 trillion worth of fossil fuel reserves will become stranded assets. This won't happen overnight, but however it does, investors who are not prepared for it will wish they were."

And, as 350.org co-founder Bill McKibben said, "None of us want to fund the destruction of the planet—here's an easy tool to make sure you're not, and to turn you into a champion of solutions."

Behar was recently interviewed about the launch of FossilFreeFunds.org by Diana Dehm of Sustainability News on LA Talk Radio. Listen here: