Is This Moth Beating Climate Change? 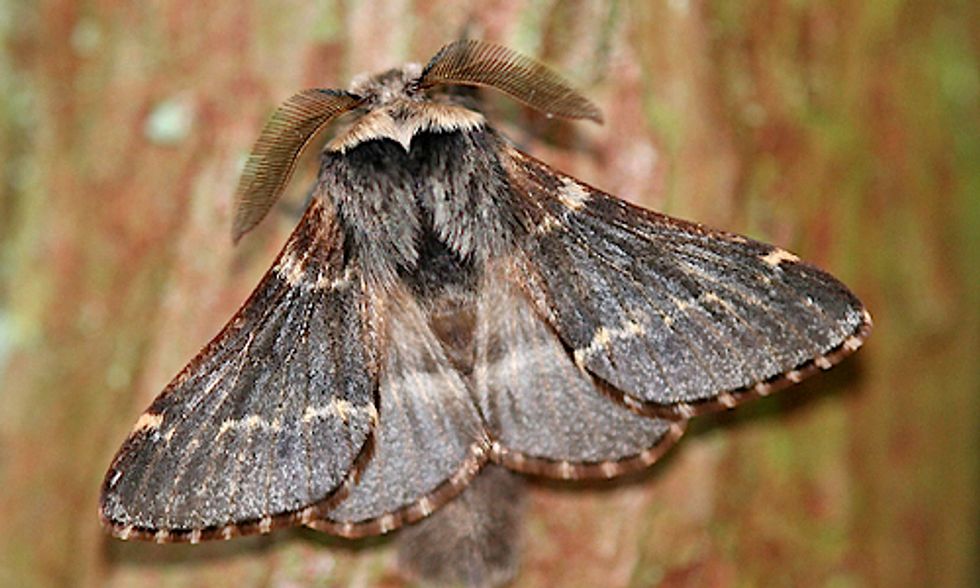 Finnish and U.S. scientists have an unsolved puzzle: good news when they expected bad news. They have invested 32 years studying the forest moths of Finnish Lapland to measure the effect of climate change—and at face value, there doesn’t seem to have been a change. Yet between 1978 and 2009, average annual temperatures in the region rose by two degrees Celsius and precipitation was higher.

Closeup of a Poecilocampa populi moth, one of 80 species analyzed in a 32-year study of subarctic forest moths in Finnish Lapland. Populations of this moth are increasing at the study site, even though moth populations there appear to be negatively impacted by a rapidly changing climate. Photo by Walter Schon via University of Michigan

“You see it getting warmer, you see it getting wetter and you see that the moth populations are either staying the same or going up,” said Mark Hunter of the University of Michigan. “So you might think ‘Great. The moths like this warmer, wetter climate.’ But that is not what is happening.”

The study looked at population records for 80 species of moth, and found that 90 percent of them were stable or increasing through the three decades. But warmer temperatures and wetter seasons are more likely to reduce the rate of population growth: species tend to do best under the conditions to which they have adapted over thousands of years.

“So the only possibility is that something else other than climate change—some other factor that we did not measure—is buffering the moths from substantial population reductions and masking the negative effects of climate change,” Professor Hunter said.

He and his colleagues report in Global Change Biology that they used nocturnal light traps to catch 388,779 moths from 456 species at the Värriö Strict Nature Reserve inside the Arctic Circle, 100 kilometers from a road and about six kilometers from the Russian frontier. They selected the data for the 80 most common species for statistical analysis.

At such high latitudes, any change in climate means a change in vegetation and an altered ecosystem, which should affect insect numbers. So the logic suggests that some unknown forces are at work, to protect the moth numbers just when they should be going down.

Ecologists don’t like unexplained outcomes. Because insects are the most numerous animals on earth, because they are pests, pollinators, food sources and disease bearers, and because their numbers ought to be indicators of both annual and long-term climate change, ecologists like to know what happens to them, and when and why.

Researchers in Europe and the U.S. have repeatedly tested animal population responses to climate change to identify winners and losers and understand what makes one species a loser, another a winner.

A 20-year bird study by Ben Hatchwell and colleagues at the University of Sheffield in the UK has found that warm dry spring weather makes all the difference to long-tailed tits: these short-lived passerines stand a much better chance of rearing chicks and then surviving to the next year, and the next chance to breed. A cold wet autumn normally increases mortality, but a preceding warm dry spring can offset this effect, they report in the journal Oikos.

So the British ornithologists have an explanation for one bird’s good performance. The Finnish entomologists would like to know what helps keep the larvae alive and the moths aflutter in the warming, changing Arctic Circle. The question is important not just for one group of high-latitude moths: scientists could be misreading the effects of climate change across a whole suite of species because these effects might be masked by other, unidentified factors.

And it becomes increasingly important with a prediction, from the Bjerknes Centre for Climate Research in Norway, that northern Europe could warm by three degrees Celsius in the winter by mid-century, with increasing rainfall.

Stefan Sobolowski and Robert Vaulard of the Pierre-Simon Laplace Institute in France report in Environmental Research Letters that even if global average warming is kept to two degree Celsius there will be “substantial and robust changes” across Europe. Against such a backdrop, it becomes important to know why one group of animals is doing better than expected—for the moment.

“The big unknown is how long this buffering will last,” said Professor Hunter. “Will it keep going indefinitely, or will the negative effects of climate change eventually just override these buffers, causing the moth populations to collapse?”