Is the Highest Climb on Mount Everest Sustainable and Who Pays the Price? 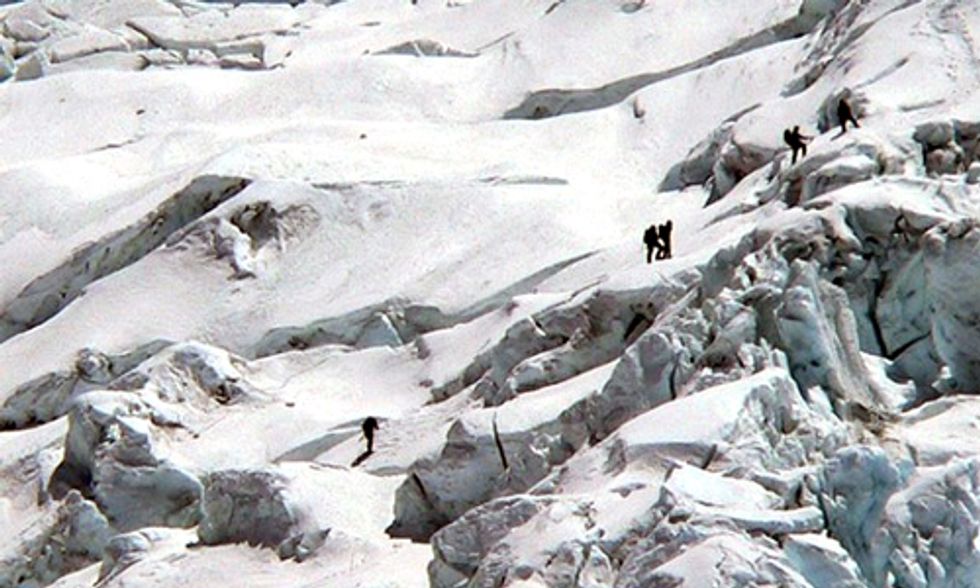 The Khumbu Icefall on Mount Everest is perhaps the most well-known and notoriously dangerous glacial feature on the planet. In a fresh post on the Glacier Hub blog, The Earth Institute’s Ben Orlove, writing with anthropologist Pasang Yangjee Sherpa of Penn State, recounts a recent workshop held in Kathmandu to address the issues raised by the tragic deaths on the icefall last spring of 16 Nepalese guides who were preparing the trail for this year’s climbing expeditions.

The Khumbu Icefall is a notoriously dangerous part of Mount Everest. Sixteen Nepalese guides died here on April 18 in one of the worst accidents in the mountain’s history. Photo: credit: Mahatma4711

The “Participatory Workshop on Roles, Responsibilities & Rights of Mountaineering Workers,” held Aug. 29-30, “represents a significant change in the debates about climbing expeditions on Mount Everest, with significance across the Himalayas and beyond,” Orlove writes.

The status of the local workers who provide the support system necessary for climbing Everest is just one among many issues arising from swelling number of people seeking to stand atop the world’s highest peak. Is the climbing system sustainable? Hundreds make the attempt each year, many with no mountaineering experience. They overcrowd climbing routes and leave behind an estimated 50 tons of trash. Even crime has become a problem on the mountain, documented in Michael Kodas’ 2008 book, “High Crimes: The Fate of Everest in an Age of Greed.”

But, the expeditions also provide a poor country with substantial revenue. In recent years volunteers have mounted clean-up expeditions up the mountain. The government now requires climbers to descend with at least 18 pounds of trash, estimated as the amount a climber might otherwise leave behind.

The April 18 accident occurred at the Khumbu Icefall at the beginning of the annual climbing season, and eventually led to the cancellation of the year’s planned expeditions.

The icefall “goes over an area in which a glacier descends a cliff so steep that the ice cannot flow smoothly, but rather becomes divided by criss-crossing crevasses into segments, many as large as big houses, which can break off and come crashing down,” the authors write. “In essence, an icefall is to a glacier what a waterfall is to a liquid river. Everest contains many other challenges to climbers, including thin air, long ascents and changeable weather, but this icefall is particularly treacherous.

“Only 13 of the bodies were recovered before weather conditions caused the cancellation of the search for the others. The guides were predominantly Sherpa, members of a Himalayan ethnic group with longstanding ties to the mountain, who have provided the core guides since the earliest expeditions of the 1920s.

“Some were offended that the government offered only scanty compensation to the families of the victims, barely enough to pay for the funerals. … The government lobbied to make sure that the climbing season—and the flow of valuable foreign revenue that it brings—would continue. In sum, the incident revealed once again the strong economic and cultural divisions that have long plagued the climbing expeditions, in which wealthy foreigners make large payments to the Nepalese government and to climbing firms, while the local guides, who face life-threatening risks as they traverse the dangerous terrain year after year, receive low pay.”

The meeting tried to address some those grievances. But, the authors say, “The meeting was in some ways inconclusive. A government official remarked, ‘Like lovers who can’t speak what is in their heart, we aren’t open in discussions and regret it once we go home.’ However, there were some positive outcomes.”

To read the full story, visit the Glacier Hub website.