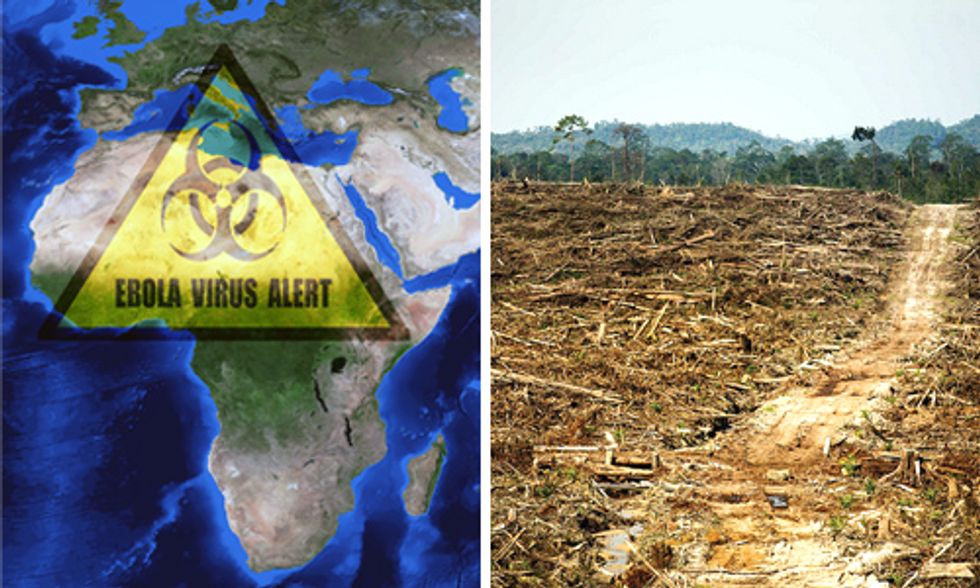 The growing Ebola virus outbreak not only highlights the tragedy enveloping the areas most affected but also offers a commentary on they way in which the political ecology in West Africa has allowed this disease to become established.

The global palm oil industry shows the trend of deep-cutting into forests for agricultural development has breached natural barriers to the evolution and spread of specific pathogens.

The narrative goes that the virus appeared spontaneously in the forest villages of Guinea in December 2013. But this is debatable given that there is evidence of antibodies the Ebola virus in human blood from Sierra Leone up to five years previously. Previously only one case of Ebola had been reported in the region, and it was the Ivory Coast strain of the virus. The strain detected in the blood samples is of the more virulent Zaire strain of Ebola, the same strain responsible for the current epidemic.

After months of very little concerted action it’s clear that the disease is now seriously in danger of spreading out of control. The global health community has declared it a crisis of international importance, which has led the host nations to implement draconian preventions strategies, tantamount in some places to martial law in terms of surveillance, quarantine, border controls and other logistical aspects of control. But this is too little, too late.

There are several mechanisms through which the virus may have emerged, and it is unlikely that this latest outbreak was spontaneous. It is poverty that drives villagers to encroach further into the forest, where they become infected with the virus when hunting and butchering wildlife, or through contact with body fluids from bats—this has been seen with Nipah, another dangerous virus associated with bats.

The likelihood of infection in this manner is compounded by inadequate rural health facilities and poor village infrastructure, compounded by the disorganized urban sprawl at the fringes of cities. The virus then spreads in a wave of fear and panic, ill-conceived intervention and logistical failures—including even insufficient food or beds for the severely ill.

Take for example the global palm oil industry, where a similar trend of deep-cutting into forests for agricultural development has breached natural barriers to the evolution and spread of specific pathogens. The effects of land grabs and the focus on certain fruit crop species leads to an Allee effect, where sudden changes in one ecological element causes the mechanisms for keeping populations—bats in this case—and viruses in equilibrium to shift, increasing the probability of spill over to alternative hosts.

This is not unheard of; the introduction of fruit tree crops in cleared forests and agricultural expansion in Malaysia was associated with the emergence of Nipah virus. Bats feeding on fruit trees infected pigs in pens, which provided a vector for the virus to humans. Another example is with vector-borne diseases such as the Japanese Encephalitis, a virus carried by wild birds which expanded its range due to growing rice and pig farming.

Chikungunya and Dengue Fever viruses exploited deforestation for secondary epidemiological cycles, which increased at the forest edge until the virus was able to adapt to secondary hosts and expand globally.

Certainly the complexity of the agro-ecological changes in West Africa warrant scrutiny. Guinea’s new agriculture is in an early stage of development, identified by the World Bank as the highest investment potential for industrial agriculture. As global markets shift—and tariffs and taxes on multinational companies are removed, farmers with small land holdings are faced with a choice: either sell off or scale up to meet the competition. Forests are one of the first casualties.

Alongside this subtle effect is the dismantling of traditional governance, violence under colonial, neo-colonial and more recent kleptocratic governments and the economic movements of people towards urbanization. Such turbulence, poverty, the influx of refugees from neighboring wars and crumbling health systems have all created an ecosystem in which the natural friction that prevents Ebola from gathering pathogenic momentum has been all but eroded.

Any international response can do little to remedy these contributing factors. In fact the response has been little more than a recognition of the complete failure of neo-liberal development strategies to contain the virus.

The “success” of the Ebola virus is fundamentally based on the sociological factors and population biology of those it infects. But the data required to test the hypothesis—detailed records about what people eat, where they go and how they interact—is presently unavailable. Instead research has focused on virus hunting, and with little success: more than 40,000 samples have not yet conclusively determined where the natural reservoir of Ebola lies. All the while, the socio-ecological factors that are critical to the spread of any disease are ignored.

Ebola and Climate Change: ‘We Are Running Out of Time,’ says World Bank President