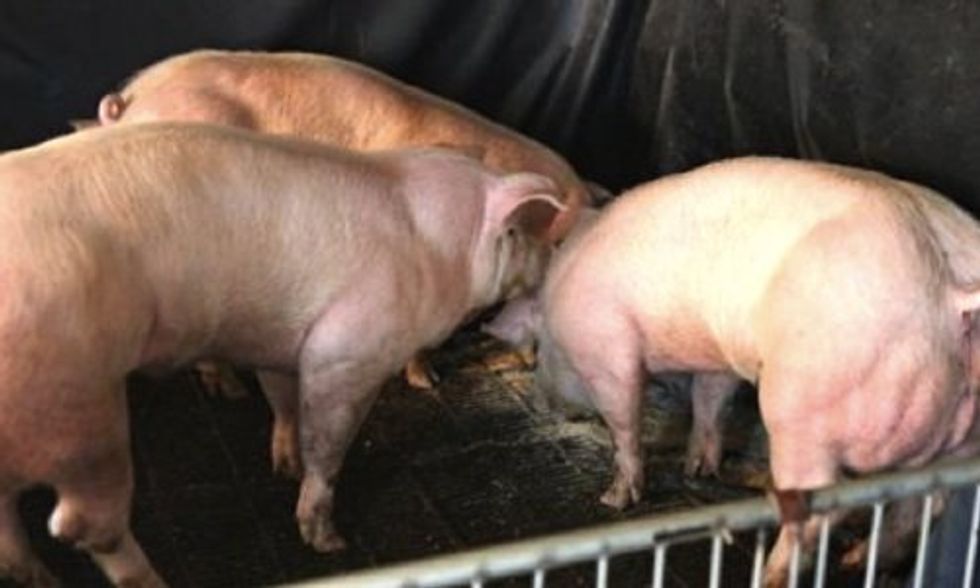 U.S. consumers are already widely skeptical about genetically modified (GMO) crops, but could genetically modified meat ever make it onto our plates? CBC News reports that, in addition to GMO salmon, there are two different varieties of GMO pork that are currently in development, raising questions about the future of our food.

Genetically engineered animals are not approved for consumption anywhere in the world, not only because the public is wary, but also because the industry is a regulatory minefield. However, before turning to GMO pork, let's first consider GMO salmon.

If the U.S. Food and Drug Administration (FDA) approves AquaBounty's salmon, it will be the first GMO animal to enter the market. This salmon—engineered to grow twice the rate of its farmed counterpart—is heavily opposed by anti-GMO camps who have nicknamed the product "frankenfish," because it's made from genetic material of other fish, such as the ocean pout.

In case you're wondering if GMO salmon will ever become a meal option, the company has been knocking on the FDA's doors for nearly 20 years for approval. Still, GMO salmon and all GMOs products alike have been championed by proponents and many scientific minds as a way to feed our planet's growing population, to ensure food security and to promote species' survival.

On to pork. There are two genetically modified pigs that have been designed to improve pork production, CBC reports.

First, researchers at the University of Edinburgh are developing a pig that is "edited" with a warthog gene to resist African swine fever, a horrific disease that has no vaccine and that has caused the widespread slaughter of pigs across eastern Europe. Researchers estimated that this GMO pig could be commercially viable within five to 10 years if approved by the FDA.

Second, at Seoul National University, researchers have developed a "double-muscled" pig. By editing a single gene, these pigs have leaner meat and have a higher yield of meat per animal. (You can see in the photo above that these animals have pronounced rear muscles). As Nature reported, these pigs are being aimed at the Chinese market, where demand for pork is increasing.

The health and safety issues surrounding GMO pork were recently discussed on the Canadian radio program The Current.

Jayson Lusk, an agricultural economist at Oklahoma State University, said on the show that these researchers are making pigs "aimed at addressing what we'd all probably agree are important problems."

However, he noted that the general public is wary of GMO products.

"I don't think it's necessarily a fear of genetic engineering—it's a fear of uncertainty," he said.

As genetic tinkering with crops and animals advances, we'll be seeing many more stories like these. Besides GMO pigs, New Zealand researchers have genetically engineered a cow that produces B-lactoglobulin-free milk, which causes allergies and digestive and respiratory reactions in infants. In Minnesota, scientists have also genetically modified cows without horns to reduce the risk of injury to farmers and other animals.