Is Frozen Yogurt a Healthy Dessert? 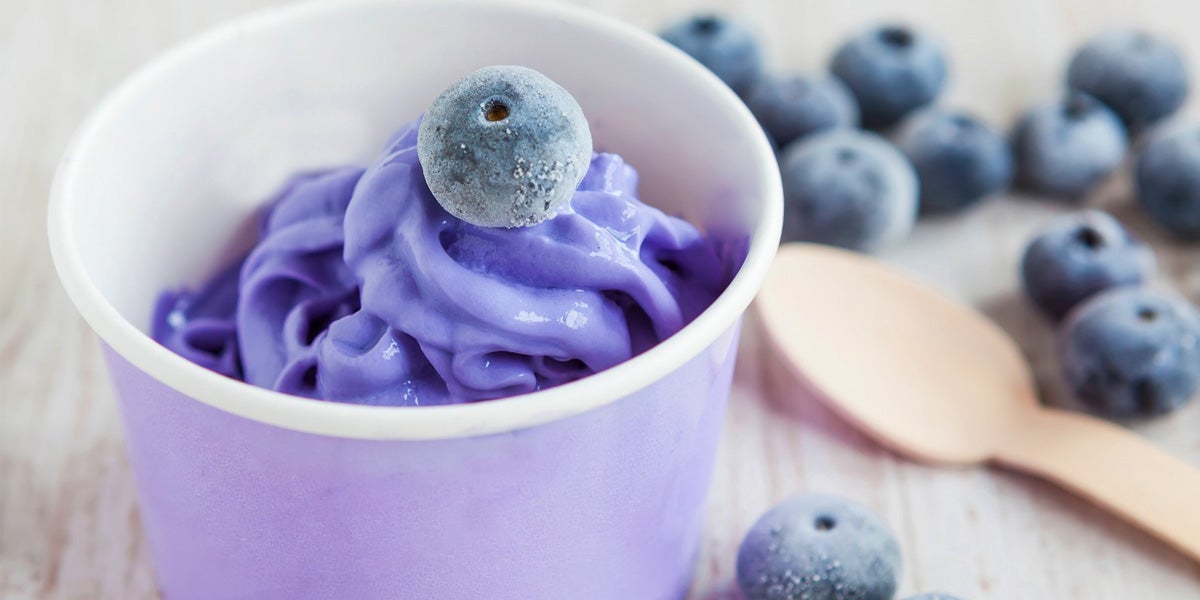 Frozen yogurt is a dessert that’s often promoted as a healthy alternative to ice cream. However, it isn’t just regular yogurt that’s been in the freezer.

In fact, it can have a vastly different nutrient profile than regular yogurt.

This article is a detailed review of frozen yogurt, exploring its nutritional content and health effects, particularly as a substitute for ice cream.

What Is Frozen Yogurt and How Is It Made?

Frozen yogurt is a popular dessert made with yogurt. It has a creamy texture and sweet, tangy taste.

Frozen yogurt is quite similar to ice cream, but the main difference is that it’s made with milk instead of cream.

Additionally, like ice cream, it is often sold in cups or cones with a wide range of topping options, such as fruit, cookies and chocolate chips.

You can buy frozen yogurt in stores or make it at home. It’s also sometimes used as an ingredient in drinks like smoothies or in desserts as a substitute for ice cream.

Ingredients can vary slightly between brands, but the main ones are:

Many frozen yogurts also contain ingredients like flavorings and stabilizers to improve their taste and texture.

To make frozen yogurt, manufacturers mix together milk and sugar. They pasteurize the mixture, heating it to a high temperature to kill any harmful bacteria.

The yogurt cultures are then added and the mixture is allowed to rest for up to four hours before it’s frozen.

Bottom Line: Frozen yogurt is a frozen dessert made with milk, yogurt cultures and sugar. It has a creamy texture and a tangy taste.

The nutrition content of frozen yogurt can vary depending on the type of milk, sweeteners and flavorings used in the yogurt mixture.

For example, frozen yogurt made with nonfat milk will have a lower fat content than varieties made with whole milk (1).

Additionally, the toppings you choose can add extra calories, fat and sugar to the final product. 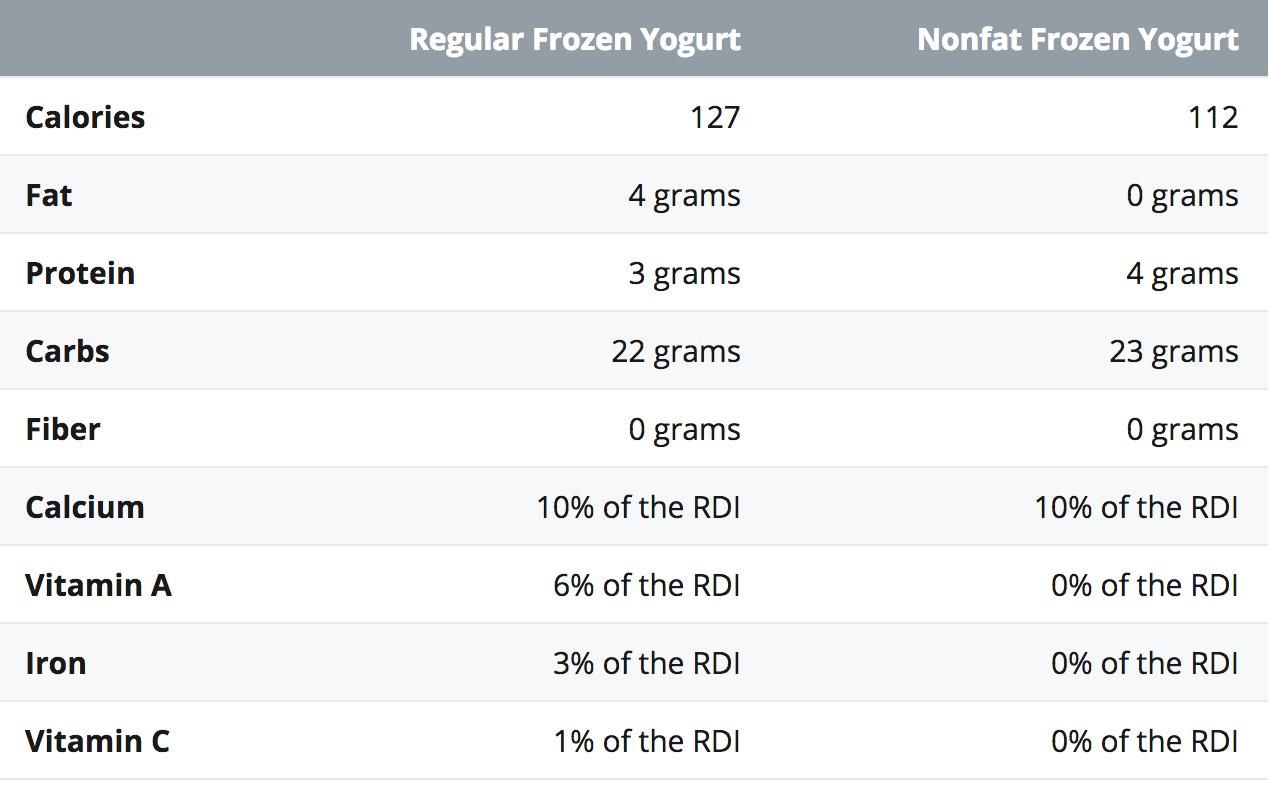 Because of the variations in recipes, always check the label to make sure what’s in your frozen yogurt.

Bottom Line: Frozen yogurt is low in fat and protein, but can be very high in sugar. The fat and sugar content depend on the amount of fat in the milk.

Frozen yogurt may have some health benefits, compared to other frozen desserts.

It can contain beneficial nutrients and bacteria, lower levels of lactose and fewer calories than desserts like ice cream.

It Can Contain Good Bacteria

Probiotics are live bacteria that are also known as “good bacteria.” When eaten, they can have beneficial effects on your health (4, 5).

However, the benefits of bacteria in frozen yogurt depend on them surviving the manufacturing process.

If your frozen yogurt was pasteurized after the good bacteria were added, then they will have been killed off.

It has also been suggested that the freezing process could reduce the number of good bacteria. However, some studies have suggested this isn’t the case, so freezing may not be an issue (6, 7, 8).

To see if your frozen yogurt contains probiotics, check for the claim “live cultures” on the label.

It May Contain Lower Levels of Lactose

If you have lactose intolerance, eating dairy products can cause digestive issues like bloating, gas and pain (9).

However, most people with lactose intolerance can tolerate small amounts of dairy, especially if it contains probiotics (10).

This is because probiotic bacteria break down some of the lactose, reducing the amount per portion.

Because some frozen yogurts contain probiotics, people with lactose intolerance may be able to eat them without any digestive problems.

However, it’s important to note that not all varieties contain live bacteria, so they may not have the same benefits (11).

It May Provide Nutrients That Benefit Bone Health

Frozen yogurt also contains reasonable amounts of some of the nutrients linked with good bone health, like calcium and protein (12).

However, despite this potential benefit, it’s worth noting that you can also get these nutrients from regular yogurt.

It Can Be Lower in Calories Than Regular Ice Cream

If you’re trying to cut back on calories, frozen yogurt is lower in calories than regular ice cream (2, 13).

However, make sure to watch your portion sizes and topping choices. If you’re not careful, these can easily bump up the calories.

Is Frozen Yogurt as Healthy as Regular Yogurt?

Yogurt can be a healthy, tasty addition to your diet.

However, unlike most plain, regular yogurts, frozen yogurt usually contains a lot of added sugar (3, 14).

In fact, sugar is one of the most important ingredients in the manufacturing process.

Adding sugar to yogurt before it’s frozen prevents large ice crystals from forming and ensures the frozen yogurt retains a creamy texture similar to ice cream. It also makes the taste more acceptable, so that it’s sweet and tangy, rather than sour.

If you’re looking for the healthiest yogurt, choose a plain, regular variety. This will give you all the health benefits without the added sugar.

Bottom Line: Plain, regular yogurt has all the benefits of frozen yogurt without the added sugar.

Is It Healthier Than Ice Cream?

One of the reasons people choose frozen yogurt is because it’s thought to be a healthier option than ice cream.

The main difference between the two products is that frozen yogurt is made with milk and not cream. This means that ice cream contains more fat (2, 16).However, it’s important to note that manufacturers often make up for this lack of fat with sugar. So beware—your frozen yogurt can contain as much, if not more, sugar than ice cream does.

This is especially true for the nonfat versions of frozen yogurt, which tend to contain more sugar.

Combined with large serving sizes and a variety of high-sugar topping options, this means that frozen yogurt can end up having way more calories and sugar than an ice cream cone.

So despite the healthy-sounding name, frozen yogurt is a dessert just like ice cream. Neither is better than the other and either can be enjoyed occasionally as a treat.

Bottom Line: Ice cream contains more fat than frozen yogurt. However, frozen yogurt can contain high amounts of sugar, meaning it should be treated as a dessert.

How to Choose a Healthy Frozen Yogurt

To make your frozen yogurt as healthy as possible, try the following:

Despite being a sweet treat, frozen yogurt generally comes in much larger serving sizes than ice cream.

To keep your portion in check, stick to around half a cup — about the size of a baseball.

If it’s self-serve, you could also try filling your cup with fruit and serving a smaller amount of frozen yogurt on top.

To make your dessert healthier, go for a topping like fresh fruit.

If you do want a more indulgent topping than fruit, try dark chocolate or nuts, both of which contain less sugar and come with some beneficial nutrients (17).

Look for Varieties Without Added Sugar

Some frozen yogurt is made with artificial sweeteners, rather than sugar.

If you want to keep your calorie intake in check, consider trying it.

Eating excess added sugars has been linked with poor health outcomes, so it’s probably better to stick to a low-fat or full-fat frozen yogurt (18).

Due to their potential health benefits, frozen yogurts that contain live probiotic cultures are the best choice.

To pick a variety that contains them, look for the words, “live active cultures” on the nutrition label.

Make Your Own at Home

Making your own frozen yogurt at home can give you more control over the ingredients and calories in your dessert.

There are lots of simple recipes online, like this one and this one.

Bottom Line: To make your frozen yogurt healthier, keep your portions in check and avoid fat-free versions. If you can, try making your own at home.

Frozen yogurt often comes in large servings and can be high in sugar.

Like other desserts, it’s fine to eat occasionally as a treat, but don’t be fooled into thinking it’s a health food.