Is Fracking Wastewater Being Dumped into Coal Mines in Western Pennsylvania? 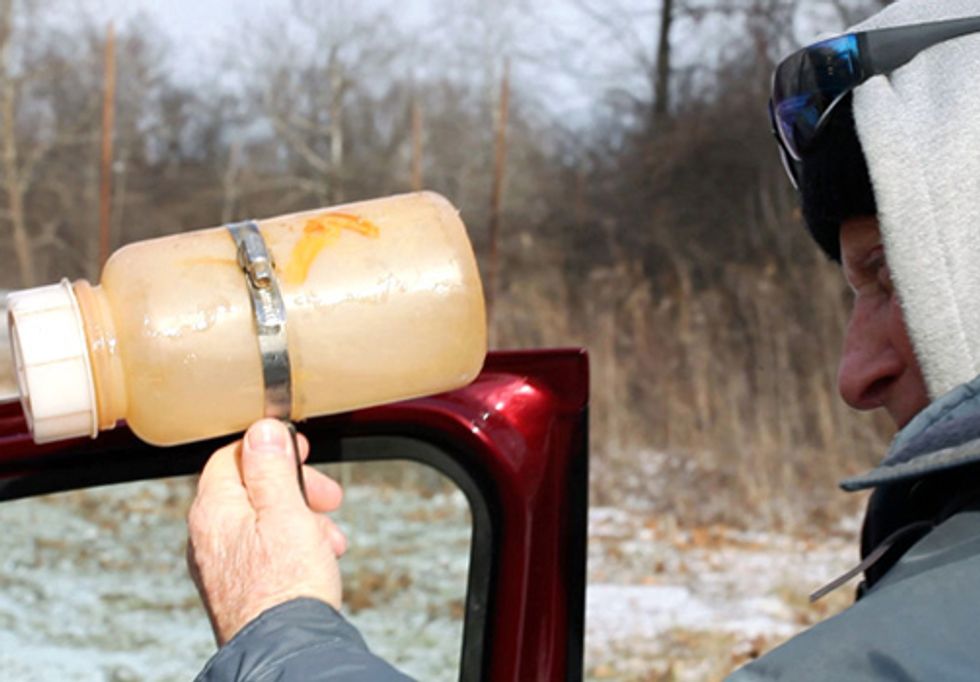 In the January cold, Ken Dufalla’s hands, chapped and raw, shake as he grips a five-foot metal pole with a small, stained plastic container attached and dunks it into the icy, orange-colored water rushing into Ten Mile Creek.

The rusty water is a highly acidic coal mine discharge flowing from the abandoned Clyde Mine directly into Ten Mile Creek in East Bethlehem Township in Washington County, Pennsylvania.

Members test every headwater stream in Greene County and many in Washington and Fayette counties. And they’ve teamed up with West Virginia University’s Water Research Institute (WRI) to check their methods and test some of the same water as the group.

On that January day, Dufalla and Hunnell, 69, were testing the orangey-red acid mine discharge from the abandoned Clyde Mine running into the creek.

Recently, Dufalla’s group has found there’s something unexpected in mine waste—bromide.

On its own, bromide is a salt found in many places. But when it’s mixed with chlorine at a water treatment plant, it can create cancer-causing agents called trihalomethanes (THMs).

Dufalla wants to know where the bromide is coming from, since it isn’t usually found at high levels in mine discharge.

But he either receives no answer or he’s brushed off.

Dufalla just wants someone to pay attention and investigate.

Without an answer from officials, Dufalla said he and members of his group are left to form their own conclusions.

Somebody, they believe, must be dumping wastewater from hydraulic fracturing, known as fracking, into coal mines.

When asked what safeguards are in place for disposing of frack wastewater, a spokesman for the Marcellus Shale Coalition cited the state’s “robust” regulatory system.

It “ensures a truly cradle-to-grave approach to the overall management of water,” Travis Windle wrote in an email.

In recent years, numerous water treatment plants in Western Pennsylvania and West Virginia have found dangerously high levels of THMs in water that they then had to treat for drinkability.

Acidic mine drainage from the Clyde Mine in East Bethlehem Township, Washington County, shows up as a rusty colored part of streams and creeks that flow into the rivers. The mine, which is abandoned, is the responsibility of the Pennsylvania Department of Environmental Protection. Photo by Natasha Khan

Jeff Kovach, general manager of the Tri-County Joint Municipal Water Authority in Washington County, said his plant didn’t have problems with THM levels before the drilling boom started. He said he believes the natural gas industry was initially causing the higher levels.

“In my own opinion, absolutely, because they are everywhere around here,” said Kovach.

The discharge from Clyde Mine, an abandoned mine overseen by the DEP, is “pretty scary,” he said.

The Tri-County plant is downstream on the Monongahela.

Greene County had more than 650 natural gas wells operating, while Washington County had nearly 900 as of June 2012, according to the DEP.

It’s been widely reported that an increase in bromide in Pennsylvania’s rivers came when the drilling industry dropped off its wastewater from fracking—the horizontal drilling process used in the Marcellus Shale—at sewage treatment plants.

In early 2011, DEP Secretary Michael Krancer called on the industry to stop taking wastewater to treatment plants. The industry voluntarily complied, and bromide levels on the Monongahela decreased, according to a recent study from Carnegie Mellon University.

But Dufalla's water testing from 2012 shows higher levels of bromide in the creeks and streams funneling into the Monongahela River.

“Every one of them happens to be in mine discharges,” he said.

Dufalla said high bromide levels are coming out of two active Cumberland Mine discharges and one Emerald Mine discharge, as well as from the Clyde Mine.

The discharges flow into nearby streams that feed into the Monongahela River, a source of drinking water for one million people.

Once bromide gets into rivers like the Monongahela, it is likely to be so diluted that it isn't a real threat. However, Dufalla said that the EPA and DEP should take steps to prevent it from getting into rivers and streams at all. The less bromide, the less risk, he said.

Alpha Natural Resources, the company that owns the Cumberland and Emerald mines, did not return PublicSource’s phone calls requesting comment.

A U.S. Geological Survey study looked at tests conducted in 1999 to determine the hydrochemical makeup of 140 abandoned mines in Pennsylvania. The study found bromide showed up in all the mine discharges that were sampled at less than .6 milligrams per liter.

The WRI sampled the same locations as Dufalla’s group in Greene and Washington counties in November 2012. They showed bromide coming out of mine discharges at levels as much as 10 times higher than the 1999 study.

"My guess is, if bromides are turning up in mine water, it's probably because someone has dumped it there," said Paul Ziemkiewicz, director of the WRI.

Dufalla said he informs the DEP when he finds an anomaly and the agency has been good about  testing the water over the past two years.

However, "the responses we get back are not acceptable," he said. "We were told, well, it's only minimal pollution from these things. We were told we don’t have the money to correct these problems."

John Poister, the DEP spokesman in Pittsburgh, said the agency sometimes conducts bromide tests on some rivers and streams, but isn’t required to.

The DEP's California District Mining Office does not test coal mine discharges for bromide, according to an email from Bill Plassio, the district mining manager.

“There is no EPA standard for bromides, therefore we do not track them in streams and creeks,” Poister said.

That’s where the problem comes in, Dufalla said.

“The EPA must set a standard for bromide,” he said, and if they don’t, the DEP should.

Dufalla, like many in Southwestern Pennsylvania, has deep connections to the land and its history. His father was a coal miner for more than 35 years, some of it at the Clyde Mine. He now leases his own 190-acre property in Greene County, to Chesapeake Energy.

Water at the edge of the Clyde Mine discharge in East Bethelehem Township turns the water orangey red where it flows into Ten Mile Creek. Photo by Natasha Khan

He said he doesn’t oppose the shale gas industry. He knows the economic benefits and recognizes that natural gas and coal provide jobs in Greene County, one of the poorest counties in the state.

He just wants the industry to be regulated.

Hunnell, one of the league’s water testers, put it this way: “We don’t want to devastate the industry but we don’t want our lives to be devastated in the process.”

To understand their perspective, it’s important to know something about recent Greene County history and a man named Allan Shipman.

Shipman operated Allan’s Waste Water, which hauled Marcellus Shale wastewater. He was convicted last year of dumping millions of gallons of wastewater, sludge, restaurant grease and other sewage, into mine shafts, streams and onto roadsides for six years in Southwestern Pennsylvania.

“I just think that there were a lot more people doing what he was doing, but he was the only one that got caught,” said Greene County Sheriff Richard Ketchem. “And then all of a sudden when he got caught you don't see that anymore.”

After a two-year investigation by the state Attorney General’s Office, Shipman was sentenced to seven years probation, 1,750 hours community service and nearly $400,000 in fines and restitution.

“I really think it turned things around in the entire industry,” Ketchem said.

Others beg to differ.

Terri Davin, president of the Greene County Watershed Alliance, said the industry has an “out of sight, out of mind” policy.

“My theory is, whenever there’s a hole, you can use it,” Davin said of the dumping that takes place. “It’s open season down here.”

Davin partially blames the residents of Greene County for not speaking up about Shipman.

“The guilty people here are us,” she said about Greene County residents. “We saw this happening and we didn’t come together and question enough.”

She said that with the amount of natural gas drilling and coal mining going on in Greene County, it’s better to question things than to turn a blind eye.

Dufalla and his group are doing that.