Is Farmed Salmon Safe to Eat? 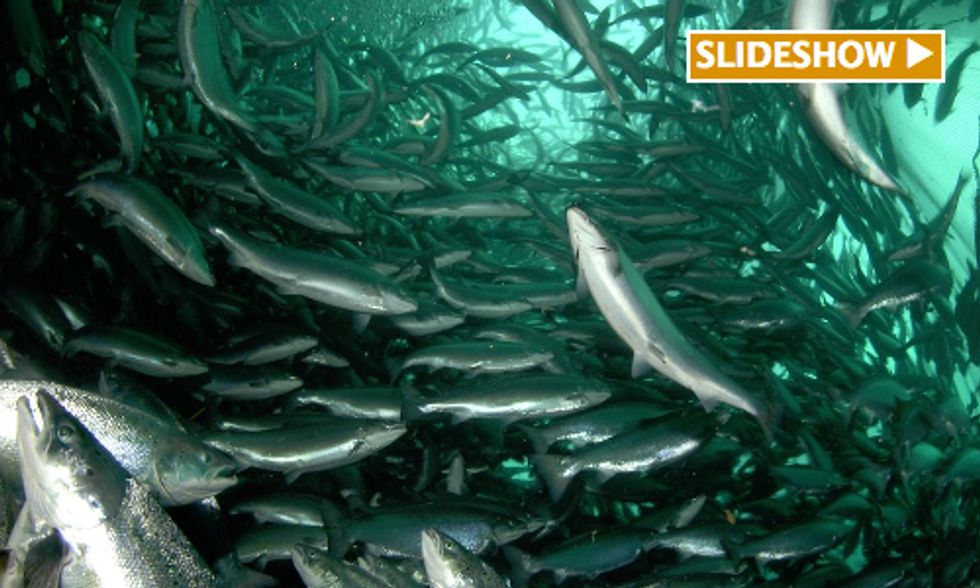 For years, environmentalists advised consumers to steer clear of farmed salmon, but now, some groups are beginning to ease their warnings due to a progressive partnership that will gradually overhaul the industry, according to National Geographic.

Given its high protein, heart-healthy omega-3 fatty acids and low traces of saturated fats, salmon is increasingly being marketed as a nutritious food.

The shift in perspective has helped increase salmon demand by more than 20 percent over the last decade, and consumption has spiked three-fold worldwide since 1980.

In fact, salmon aquaculture, otherwise known as fish farming, is the fastest growing food production system in the world—accounting for 70 percent (2.4 million metric tons) of the market, according to the World Wildlife Fund (WWF).

Environmentalists had sounded past warnings to avoid farmed salmon, mainly because the carnivorous fish are fed animal-derived proteins called "fish meal," or fish oil made from anchovies, which have been shown to carry Polychlorinated biphenyls (PCBs) and other toxins that can make their way into the human food supply.

"It’s fair to say that salmon farming is better than it used to be, but it used to be horrendous," wrote Oceana contributor Justine Hausheer. "Even the best farms still pollute their waters with parasiticides, chemicals and fish feces. The Chilean farmed salmon industry uses over 300,000 kilograms of antibiotics a year, causing bacterial resistances that affect fish, the environment and human beings."

Additionally, farmed salmon can leap out of the oceanside pens they are raised in, which can potentially spread disease or unwanted genes to wild populations already under stress from overfishing, pollution and shrinking habitats.

Yet, the fish farming industry has taken major steps to clean up its act and is now gaining positive feedback from environmental groups, according to Jason Clay, WWF's senior vice president for market transformation. Clay spoke on farmed salmon at Seafood Expo North America in Boston on Tuesday and is an authority on the matter due, in part, to his contributions in developing a set of sustainability standards called the Aquaculture Stewardship Council (ASC).

Founded in 2010 and based in the Netherlands, the ASC is a nonprofit organization, which is helping to lead a global certification and labeling program for responsibly farmed seafood that reduces social and environmental impacts.

ASC standards include 152 different indicators, including low tolerance for escaping fish, limits on antibiotics and safety guidelines on food the fish can be fed.

So far, a small proportion of salmon grown on Norway farms has been shown to meet the group's standards, but much more is on the way in various countries.

Last August, 15 major salmon farm companies, representing 70 percent of the world-farmed salmon market, formed the Global Salmon Initiative (GSI), which has pledged to source 100 percent of their salmon from farms that meet ASC standards by 2020.

All agriculture inevitably pollutes to some degree, said Doris Soto, senior aquaculture officer with the Food and Agriculture Organization of the United Nations, at this week's seafood expo. With this agreement, salmon producers have set themselves apart, she said.

"The industry is trying to face its problems, especially the environmental problems in a way that has perhaps not been done in agriculture," she told USA Today.

According to WWF, here are some major environmental and social impacts the salmon farm industry needs to address in the coming years:

Some say the next step is to grow and sell genetically engineered salmon that can mature twice as fast as its natural counterpart. AquaBounty Technologies, a Massachusetts-based company, has spent years developing a fish it refers to as AquAdvantage salmon.

The company wants to raise sterile Atlantic salmon females that can rapidly grow to market size compared to conventional salmon by using a growth hormone-regulating gene from Chinook salmon and some genetic material from ocean pout.

The FDA has yet to approve the fish, which is the first genetically engineered food animal in the world.

In 2010, an FDA advisory panel stated the fish is "highly unlikely to cause any significant effects on the environment" and that it is "as safe as food from conventional Atlantic salmon," although the agency said more testing was needed, according to National Geographic.

Last spring, more than 1.8 million people sent comments vehemently opposing the approval of a genetically engineered salmon by the FDA.

No genetically modified salmon are currently permitted under the ASC guidelines.