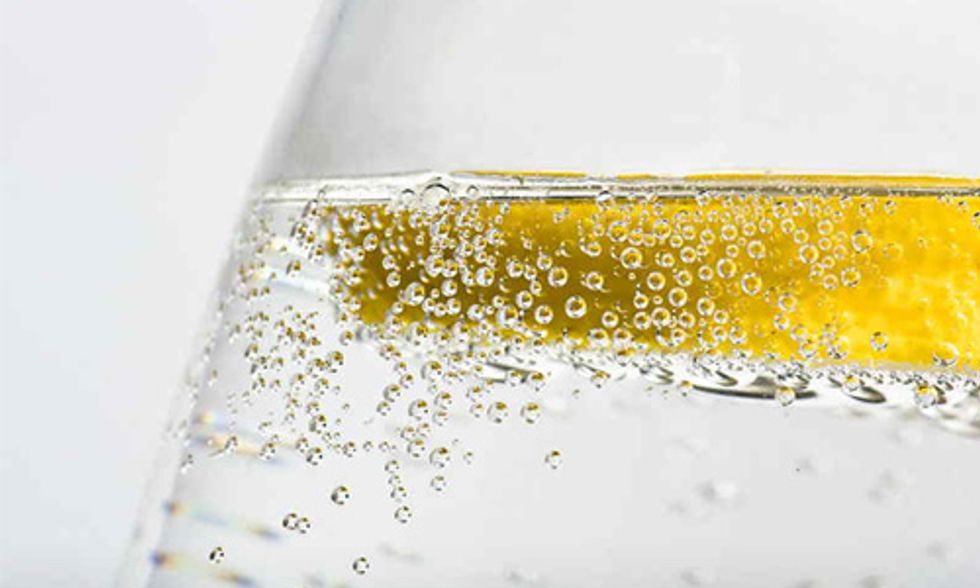 Carbonated water is a refreshing beverage and a good alternative to sugary soft drinks. However, concerns have been raised that it may be bad for your health.

Carbonated water is water that has been infused with carbon dioxide gas under pressure.

This article takes a detailed look at the health effects of carbonated water.

What is Carbonated Water?

Carbonated water is water that has been infused with carbon dioxide gas under pressure.

With the exception of seltzer water, they usually have salt added to improve the taste. Sometimes small amounts of other minerals are included.

Natural sparkling mineral waters, such as Perrier and San Pellegrino, are different.

Tonic water is a form of carbonated water that contains a bitter compound called quinine, along with sugar or high-fructose corn syrup.

Bottom Line: Carbonated water is created by combining water with carbon dioxide under pressure. Sodium and other minerals are often added.

Carbon dioxide and water react chemically to produce carbonic acid, a weak acid that's been shown to stimulate the same nerve receptors in your mouth as mustard.

This triggers a burning, prickly sensation that can be both irritating and enjoyable for many people (1, 2).

The pH of carbonated water is 3–4, which means it's slightly acidic.

However, drinking an acidic beverage like carbonated water does not make your body more acidic.

Your kidneys and lungs remove excess carbon dioxide. This keeps your blood at a slightly alkaline pH of 7.35–7.45, regardless of what you eat or drink.

Bottom Line: Carbonated water is acidic, but your body maintains a stable, slightly alkaline pH no matter what you consume.

Does it Affect Dental Health?

One of the biggest concerns about sparkling water is its effect on teeth, since the enamel is directly exposed to acid.

There is very little research on this topic, but one study found that sparkling mineral water damaged enamel only slightly more than still water. Furthermore, it was 100 times less damaging than a sugary soft drink (3).

In one study, carbonated beverages showed strong potential to destroy enamel, but only if they contained sugar. In fact, a non-carbonated sweet beverage (Gatorade) was more harmful than a carbonated sugar-free drink (Diet Coke) (4).

In another study, samples of tooth enamel were placed in various beverages for up to 24 hours. The sugar-sweetened carbonated and non-carbonated beverages resulted in significantly greater enamel loss than diet drinks (5).

Another review of several studies found that the combination of sugar and carbonation may lead to severe dental decay (6).

However, plain sparkling water appears to pose little risk to dental health. It's only the sugary types that are harmful (7).

If you're concerned about dental health, try drinking sparkling water with a meal or rinsing your mouth with plain water after drinking it.

Does it Affect Digestion?

It Can Improve Swallowing Ability

It might seem surprising, but studies suggest that sparkling water may actually improve swallowing ability in both young and older adults (8, 9, 10).

In one study, 16 healthy people were asked to repeatedly swallow different liquids. Carbonated water showed the strongest ability to stimulate the nerves responsible for swallowing function (9).

Another study showed that the combination of cold temperature and carbonation strengthened these beneficial effects (10).

In a study of 72 people who felt a persistent need to clear their throats, drinking ice-cold carbonated water led to improvement in 63 percent of the subjects. Those who had the most frequent and severe symptoms experienced the greatest benefits (11).

It May Increase Feelings of Fullness

Carbonated water may also help you feel full longer than plain water does.

Sparkling water may help food remain in the first part of the stomach for longer, which can trigger a sensation of fullness (12).

In a controlled study of 19 healthy young women, fullness scores were higher after the participants drank 8 oz (250 ml) of soda water, compared to still water (13).

However, larger studies are needed to confirm these results.

It May Help Relieve Constipation

What's more, the participants reported a 58 percent decrease in symptoms (14).

There's also evidence that sparkling water may improve other symptoms of indigestion, including stomach pain.

One controlled study looked at 21 people with chronic digestive issues. After 15 days, those who drank carbonated water had significant improvements in digestive symptoms, constipation and gallbladder emptying (15).

Bottom Line: Carbonated water has benefits for digestion. It may improve swallowing, increase feelings of fullness and reduce constipation.

Many people believe that carbonated beverages are bad for bones because of their high acid content. However, research suggests the carbonation isn't to blame.

A large observational study of more than 2,500 people found that cola was the only beverage associated with significantly lower bone mineral density. Carbonated water appeared to have no effect on bone health (16).

Unlike carbonated water and clear soda, cola drinks contain a lot of phosphorus.

The researchers proposed that the cola drinkers may have been consuming too much phosphorus and not enough calcium. This is a potential risk factor for bone loss.

In another study, teen girls who consumed carbonated drinks were found to have lower bone mineral density. This was attributed to those beverages replacing milk in their diet, resulting in inadequate calcium intake (17).

Does it Affect Heart Health?

In the same group of 18 postmenopausal women from the bone health study, the researchers measured indicators of heart health.

Those who drank sodium-rich carbonated water had a decrease in LDL (the “bad") cholesterol, inflammatory markers and blood sugar.

Additionally, the estimated risk of developing heart disease within 10 years was 35 percent lower for those drinking the carbonated water, compared to the control water.

However, since this was only one small study, a lot more research needs to be done before drawing conclusions.

Bottom Line: Carbonated water may have beneficial effects on cholesterol, inflammation and blood sugar. However, this needs to be studied a lot more.

So is Carbonated Water Actually Bad For You?

There is currently no evidence that carbonated or sparkling water is bad for you.

It is not really that harmful for dental health and seems to have no effect on bone health.

Interestingly, a carbonated drink may even enhance digestion by improving swallowing ability and reducing constipation.

It's also a calorie-free beverage that causes a pleasurable bubbly sensation. Many people prefer it over still water.

There's no reason to give up this beverage if you enjoy it. In fact, it may actually improve your overall health.

15 Calcium-Rich Foods, Many Which Are Non-Dairy