Is Dimock's Water Safe to Drink? 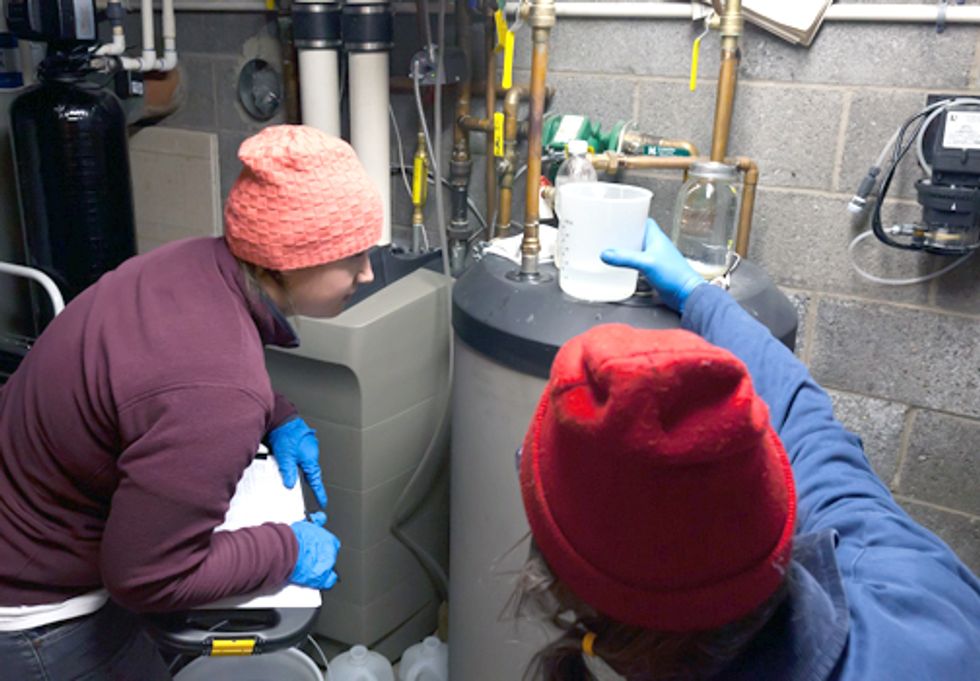 Federal health officials are assessing risks related to elevated levels of arsenic, barium, manganese and methane in an aquifer that supplies homes in a shale gas production zone in Dimock, Pa.

The Agency for Toxic Substances and Disease Registry is following up on an U.S. EPA study that analyzed the water of 64 homes near drilling operations in the Marcellus Shale in the rural community just south of the border with New York State. After six months of testing, the U.S. EPA concluded last month that levels of pollution in five of the wells—roughly 8 percent—were high enough to pose health risks, but those risks were mitigated by treatment systems installed in or planned for the homes.

The U.S. EPA investigation was prompted by an ATSDR analysis of previous water tests in December, 2011. The ATSDR, acting on concerns by residents, evaluated records of previous samples collected by both Cabot Oil & Gas and the Pennsylvania Department of Environmental Protection. Officials found evidence of elevated levels of various solvents, metals, and glycols that posed “a possible chronic public health threat based on prolonged use of the water” in “at least some” of the Dimock wells.

According to the report, ATSDR Record of Activity/Technical Assist UJD #: IBD7:

Agency officials visited the Dimock homes along Carter Road and State Route 3023 on Nov. 10, 2011 and were provided a large amount of well data. Based on the home visits and preliminary review of data, EPA and ATSDR raised the following concerns: the reliability of methane removal systems; the presence of other contaminants besides methane (metals, volatile organics and non-naturally occurring organics) for which the well treatment systems are not designed or in place to address; and homes/wells in Dimock that may have never been tested and may be contaminated. The multiple sampling efforts at this site to date were conducted by PADEP and private contractors not affiliated with EPA.

In response to the concerns, the U.S. EPA subsequently tested wells in the area between January and June. In July, the EPA press office issued a release that stated “no further action” was needed by the EPA. But the release failed to mention that the EPA results would be factored into a broader health study by the ATSDR. Accordingly, the EPA results were widely characterized by news outlets as resolution to pollution questions that have nagged the small town overlying one of the most lucrative production zones for the Marcellus shale.

The ongoing ATSDR investigation and follow-up -- cited in the Record of Activity/Technical Assist – were confirmed by Bernadette Burden, a spokeswoman for the ATSDR. According to Burden, the agency is pursuing “a fairly comprehensive review” of the Dimock water case that takes into account the EPA tests, as well as previous tests by Cabot contractors and the DEP. The ATSDR -- a branch of the Centers of Disease Control and Prevention -- will account for risks of long-term exposures to the water through showering, drinking, bathing and washing, as well as risks that might be compounded when people are exposed to multiple toxicants. There is no time frame for the completion of the report, she said.

According to the December 2011 “Record of Activity/Technical Assist”:

A full public health evaluation should be conducted on the data from the site area. Because many of these compounds (e.g. metals) affect the same organ systems, ATSDR recommends evaluating the mixture for public health impacts using computational techniques or other suitable methods to evaluate the potential for synergistic actions: The cumulative concentration of all dissolved combustible gases should be considered to protect against the buildup of explosive atmospheres in all wells in the area.

The contaminants found by the U.S. EPA—arsenic, barium, manganese and methane—occur naturally in the ground. They are also associated with drilling operations, which can exacerbate existing problems or introduce new ones. In the five cases where the levels were high, according to the EPA press release, the residents have or will have treatment systems to reduce chemical concentrations to levels acceptable for potable water.

Dimock has been the focal point of a national controversy over the impacts and risks associated with shale gas development and high volume hydraulic fracturing. The process, commonly known as fracking, involves injecting bedrock with millions of gallons of chemical solution to stimulate the flow of natural gas. While fracking has often been implicated when things go wrong, the migration of methane and other chemicals in the ground into aquifers can be caused by drilling in the absence of fracking. Barium, one of the problem chemicals found in Dimock, is a common constituent of drilling “mud” – a viscous solution used to lubricate the drill bit and float cuttings to the surface.

The Dimock conflict began on Jan. 1, 2009, with the explosion of a well that supplied water to the home of Norma Fiorentino, a plumber’s widow and great grandmother. A subsequent investigation by the Pennsylvania Department of Environmental Projection (DEP) found that methane was seeping from nearby drilling operations into an aquifer that supplied Norma’s well and others along the Carter Road area. Cabot contested the findings after the DEP, under Governor Ed Rendall’s administration, determined that the aquifer was permanently damaged from methane migrating from the bores of nearby gas wells. The DEP ordered Cabot to build an $11 million water pipeline to supply affected homes. That order was lifted shortly after Tom Corbett won the gubernatorial election in November 2011.

Last month, Cabot reported that it had reached terms for a settlement with 32 of 36 Dimock families that were suing the company for water pollution. Terms of the deal were not disclosed. Not all the plaintiffs accepted the deal, and some are continuing to pursue the case.

Note: I asked EPA officials the following question through spokeswoman Terri-A White. White told me to expect a reply soon. I will update this report accordingly.

What steps have been taken to correct this?

ATSDR Record of Activity/Technical Assist (UJD #: IBD7 Date: 12/28/2011) advises the EPA that “Additional characterization of the groundwater quality and a thorough review of any changes in concentration over time are indicated. “

Has this been done?

In the same document, the ATSDR has also recommended that “A full public health evaluation should be conducted on the data from the site area” and “evaluating the mixture for public health impacts using computational techniques or other suitable methods to evaluate the potential for synergistic actions” and “The cumulative concentration of all dissolved combustible gases should be considered to protect against the buildup of explosive atmospheres in all wells in the area. “

Has this been done?