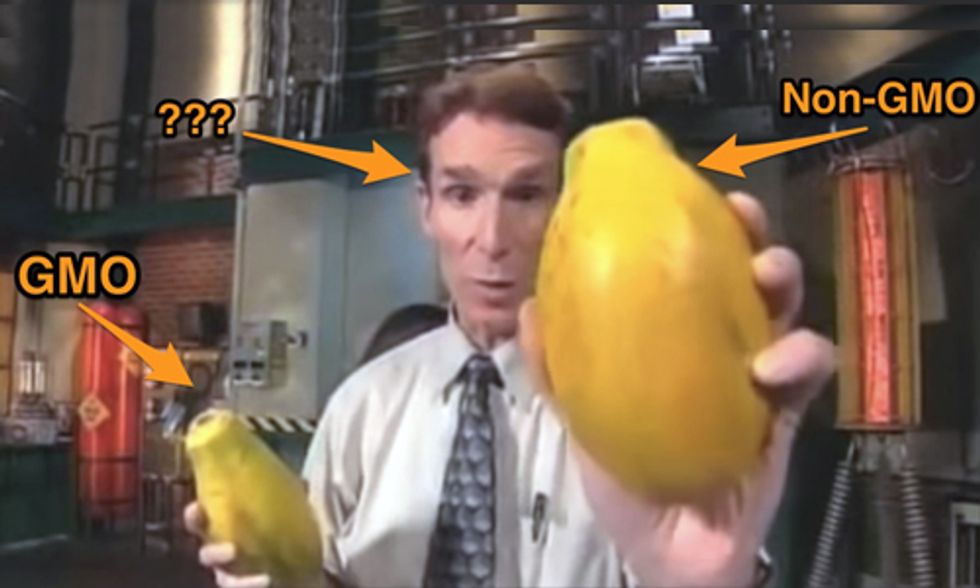 You may have heard that popular scientist Bill Nye has mysteriously revised his outlook on genetically modified organisms (GMOs). Several years ago, the children’s show host advocated for the labeling of genetically modified foods, citing concerns about what GMOs could do to ecosystems. But now his position on the controversial technology has flipped. This development is the latest in a trend spearheaded by agribusiness giants to discredit the GMO labeling movement, and it’s especially hard to disassociate his reversal from this PR blitz since it coincided with Nye’s recent trip to Monsanto’s headquarters.

Companies like Monsanto hope that casting doubt on the GMO labeling debate will cause us to get caught up in the proverbial weeds of the issue.

We’ll never know what actually went down during Nye’s visit, as Tom Philpott at Mother Jones notes, but we do know that Monsanto has poured millions of dollars into public relation efforts to sell the public on GMOs. Because that’s what you do when you are a corporation with deep coffers and a product that the public is wisely skeptical of.

Does this mean that it’s game over for the GMO labeling movement or that we should trust Monsanto’s word? Of course not. In fact, it means we should be more suspicious than ever.

Companies like Monsanto hope that casting doubt on the GMO labeling debate will cause us to get caught up in the proverbial weeds of the issue. So let’s get something straight: the debate over GMOs isn’t just about GMOs. It’s about the current and future state of our food system—who grows and sells our food, how it’s marketed, and what technologies were used to produce it. By selling seeds to farmers, peddling pesticides, forming corporate monopolies and funding academic research on GMOs, agribusiness giants like Monsanto have one goal in mind: controlling the food system. The millions of people calling for labeling of GMO foods have a problem with that. Furthermore, it is disappointing to see such beloved science advocates as Bill Nye and Neil deGrasse Tyson being captured by the industry.

As I outlined in my book Foodopoly, Monsanto’s roots in the biotech game date back decades, and they have a long history of subverting public policy. In effect, the company used its relationship with the Reagan Administration to create a weak regulatory process that would help the company bring its products to market quickly and smoothly. A 1985 U.S. Patent and Trademark Office ruling that allowed for plants to be patented further entrenched Monsanto’s power in this area. Since 1999, the fifty largest agricultural and food patent-holding companies and two of the largest biotech and agrochemical trade associations have spent more than US$572 million in campaign contributions and lobbying expenditures, much of it to create a favorable political context to allow GMOs to proliferate.

Just because the industry has launched a charm offensive in the media when it comes to GMOs doesn’t change the basic facts: GMOs are largely untested, and their long-term effects on our health and our planet are still unknown; they promote the use of dangerous chemicals, and they pose a significant threat to organic agriculture. What’s more, consumers should absolutely get to decide whether the food they are buying carries these unknown risks or supports this system; GMO foods must be labeled.

Corporations and their hired guns love confusing people about the science behind their questionable products to help shape favorable public opinion (in the case of GMOs, asserting there is scientific consensus where none actually exists). But we aren’t buying their spin, nor should you.

Are Insects the Next Climate-Friendly Superfood?