Is Aspartame Good or Bad for You? 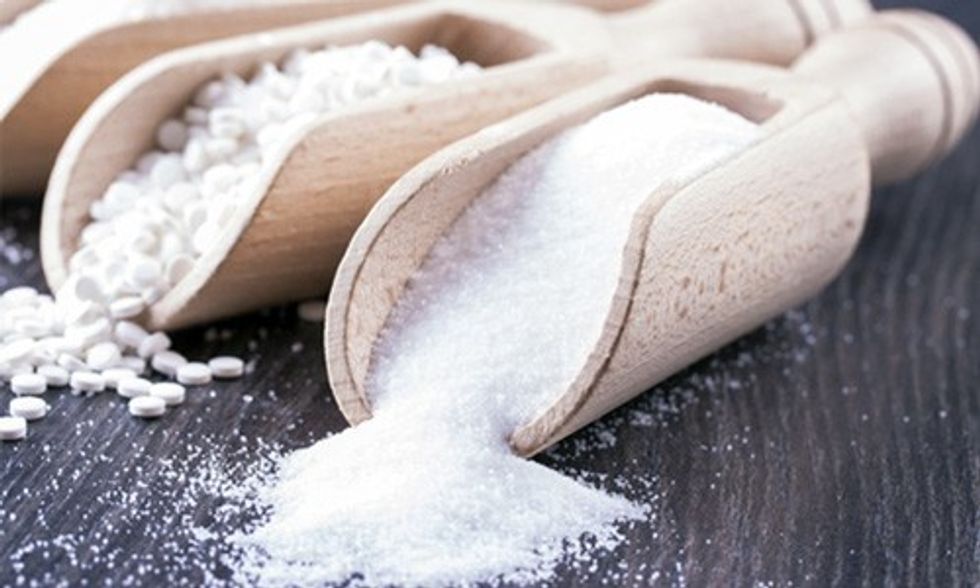 Aspartame is one of the most controversial sweeteners in the world.

Originally sold under the brand name NutraSweet, aspartame was approved for use in food products in the 1980s. Photo credit: Shutterstock

It is claimed to cause health problems ranging from headaches to cancer.

On the other hand, food safety authorities and other mainstream sources consider it to be safe.

This article takes an objective look at aspartame and its health effects, examining both sides of the debate.

Aspartame is an artificial sweetener, often denoted as E951.

As a sugar substitute, aspartame stimulates the taste buds on the tongue in the same way as sugar.

It is used in a variety of foods, beverages, desserts, sweets, breakfast cereals, chewing gums and weight-control products. It is also used as a tabletop sweetener.

This image shows the chemical structure of aspartame:

Aspartame is actually a dipeptide, a small protein made of two amino acids, phenylalanine and aspartic acid. To make it sweet, a hydrocarbon has been attached to the phenylalanine.

Bottom Line: Aspartame is an artificial sweetener, originally marketed as NutraSweet. It replaces sugar in a variety of food products and is also used as a tabletop sweetener.
What Happens to Aspartame in the Digestive System?

After we consume aspartame, none of it actually enters the blood intact.

In the stomach, digestive enzymes break it down into:

Any health effects from aspartame consumption are caused by these compounds, which are absorbed into the blood.

Below are more details about these three breakdown products of aspartame.

Phenylalanine is an essential amino acid that we must get from the diet.

Eating food that is high in phenylalanine has no adverse effects in healthy people. In fact, it is naturally present in dietary protein.

Aspartame is a minor source of phenylalanine compared to the amounts you get from other foods so this is not a cause for concern.

However, phenylalanine can reach toxic levels in people with a genetic disorder called phenylketonuria (PKU). Those who have PKU need to avoid foods high in phenylalanine especially during childhood and adolescence (2).

Bottom Line: Aspartame is a source of phenylalanine, an essential amino acid. Phenylalanine has no harmful effects in healthy people but it should be avoided by those with a genetic disorder called phenylketonuria (PKU).

Like phenylalanine, aspartic acid is a naturally-occurring amino acid.

It is one of the most common amino acids in the human diet. It can also be produced by our own bodies.

As a part of protein, aspartic acid is found in most foods. Rich dietary sources include fish, eggs, meat and soy protein.

Compared to other dietary sources, aspartame is a minor source of aspartic acid.

Bottom Line: Aspartame is a minor source of aspartic acid, a naturally-occurring amino acid found in foods that contain protein.

Methanol is a toxic substance related to the ethanol found in alcoholic beverages.

It is only a health concern when consumed in high amounts. This can happen when consuming improperly brewed, home-made alcoholic beverages.

The methanol produced during the digestion of aspartame is only a small part of the total dietary intake. For this reason, methanol from aspartame is not considered to be a health issue (7).

Bottom Line: As aspartame is digested, low amounts of methanol are formed. Aspartame is only a minor source of methanol in the diet, so it is not considered to be a problem.

Is Aspartame Bad For You?

Thousands of websites claim that it is seriously harmful. Aspartame is blamed for hundreds of health problems, ranging from cancer to headaches.

Below is a review of the scientific evidence behind the most common claims.

A few notable animal studies from the European Ramazzini Foundation suggest that aspartame may cause cancer (10, 11, 12).

However, other scientists have criticized these studies for using poor methods and not being very relevant to humans (7, 13).

One observational study in humans found a weak connection between certain types of cancer and aspartame, but only in men (14).

Other observational studies did not find an association between aspartame intake and brain or blood cancer (15, 16).

Additionally, scientific reviews have concluded that there is no evidence that aspartame in the human diet causes cancer (7, 17, 18).

Bottom Line: Several studies have researched the connection between aspartame consumption and cancer. Overall, there is no conclusive evidence to suggest that aspartame increases the risk of cancer in humans.

As a low-calorie sweetener, aspartame is commonly consumed by people who want to enjoy the sweetness but need to limit their sugar intake.

Although it is clear that aspartame does not cause weight gain, its usefulness for weight loss has been questioned.

However, most studies suggest that replacing sugar with aspartame may be useful to prevent future weight gain (19, 20, 21).

Bottom Line: Consuming aspartame-sweetened foods and beverages is not an effective weight loss method. However, it may be useful to prevent future weight gain.

One scientific review speculated that aspartame could lead to various mental problems (22).

However, this review was heavily criticized for incorrect information, unsupported speculation and low-quality references (23).

Only one study has reported possible adverse effects from aspartame consumption. Patients with depression reported more severe symptoms when they were given capsules with aspartame (34).

Bottom Line: Aspartame appears to have no adverse effects on behavior, mood or mental performance. One study indicates adverse effects in patients with depression, but the evidence is weak.

A few small studies have investigated the effects of aspartame on seizures. Most of them found no link (35, 36).

Bottom Line: There is no conclusive evidence that aspartame causes seizures. One study indicated an increased risk for absence seizures in children.

Several studies have investigated the effects of aspartame on headaches.

One study showed that aspartame significantly increased how often people got headaches, but not how long the headaches lasted or how severe they were.

However, there was high variability between individuals, which makes the results unreliable (39).

Another study found a weak link between aspartame and the frequency of headaches. No difference in the severity or duration of headaches was reported (40).

Bottom Line: There is limited evidence that aspartame can increase the frequency of headaches. More studies are needed.

Aspartame is one of the world's most studied food additives and the majority of studies conclude that it is safe.

Almost every study found no adverse effects from consuming it. Some of these studies included people who actually considered themselves to be sensitive to aspartame (41).

All things considered, there is no good evidence to claim that aspartame is harmful.

However, it is impossible to rule out some rare cases of real aspartame sensitivity or allergy.

If you feel like you have an adverse reaction to aspartame, then simply avoid it.

5 Ways to Prevent and Treat Cancer

7 Products Big Food Wants You to Think Are Healthy