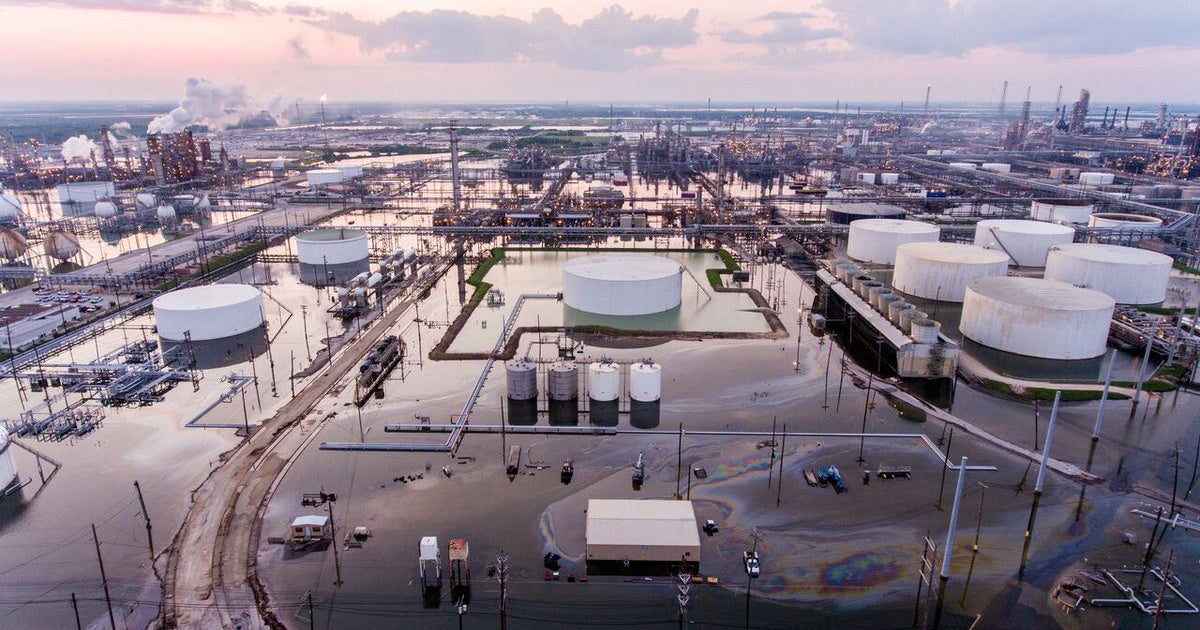 The nation's largest oil refinery, owned by Motiva and located in Port Arthur, Texas, was forced to shut down due to flooding from Hurricane Harvey. Alex Glostrum / Louisiana Bucket Brigade

Our country has just witnessed two of the worst hurricanes in our history and the work of rebuilding shattered lives in Texas, Florida, and elsewhere has barely begun. Toxic cleanup will be a part of the work ahead.

This is an area dotted with oil refineries, chemical plants, Superfund sites and coal-fired power plants. All of these structures represent toxic waste and contamination threats during the best of weather times; with storms, these issues become even more dire.

Spills and explosions have already contaminated vulnerable communities across the region. And as operations are restarted at industrial sites, toxic plumes with high levels of dangerous contaminants present serious new dangers. Houston officials have reported high levels of cancer-causing benzene near one refinery, with winds scattering the pollution.

While the hurricanes have brought these issues more prominently into the spotlight, the truth is that these issues represent battles fought by communities for years about the health hazards lurking behind the fences of the industrial operations and waste sites in people’s backyards.

And for years, industries and their political allies have dug in their heels when it comes to cleaning up and installing safeguards at these toxic sites. This resistance has only grown under the Trump administration, even as climate change ups the stakes with greater storm intensity. Using the power of the law, Earthjustice has pushed regulators to step up to their role of protecting citizens instead of caving to well-funded corporate interests.

“There’s no leadership [among officials] here,” said Yvette Arellano, research and policy liaison for Texas Environmental Justice Advocacy Services in Houston. “The amount of money coming from industry to influence the political process is incredible.” 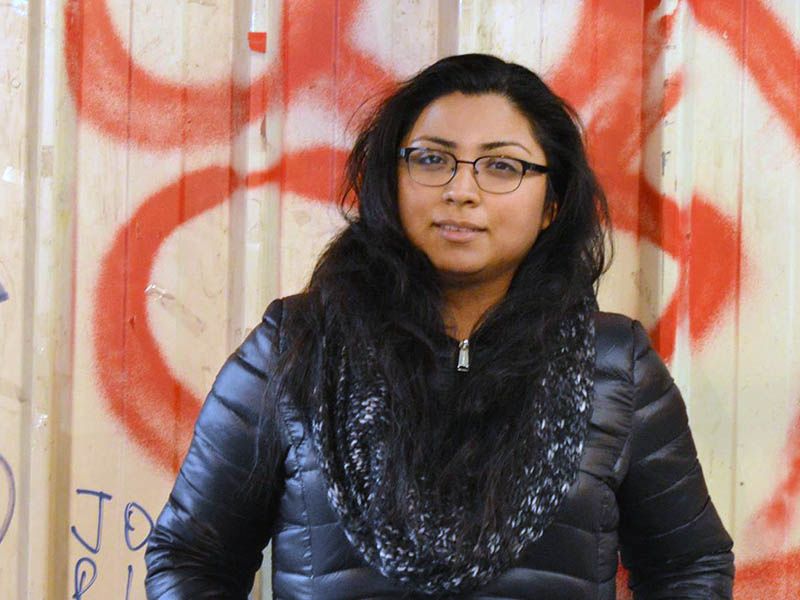 In Texas, storage tanks holding crude oil, gasoline and toxic contaminants failed when storm water from Harvey caused them to collapse, spilling at least 145,000 gallons of fuel and polluting the air. Meanwhile, power failures and subsequent explosions at the Arkema chemical plant forced evacuations within a 1.5 mile radius and creating a plume of dangerous pollutants.

Across Florida, flooding threatened many of the 12 coal-fired power plants in the state that produce roughly 9 billion pounds of coal ash a year. This toxic ash typically is stored in earthen dams near water, making surrounding neighborhoods extremely vulnerable during flooding and storm surges.

Scores of toxic Superfund sites—locations contaminated with hazardous waste and identified by the EPA for cleanup—also exist in both states. Many of these sites are not required to publicly disclose their emergency plans. The EPA scrambled ahead of the storms to urge last-ditch efforts to shore up defenses at sites, but the hour was late. Such efforts require years of sustained attention.

The French Ltd. Superfund site in Crosby, Texas, was inundated by Harvey, said Arellano, noting with concern that little seems to be compelling public agencies to document the damage from spills and address it.

“People reported strong odors coming from the facilities,” she said, but information was not provided about risks or likely impacts.

Earthjustice and local community partners have doggedly pushed industry to clean up and adopt key safety measures, and will continue to document the dangers and hold industry accountable.

The Superfund sites all along Irma’s path tell this story. The federal government created the Superfund program in 1983 to designate for cleanup the country’s worst hazardous waste sites, ones that would take years to remediate. At that time, the EPA was supposed to create rules ensuring that companies most likely to make such toxic messes would have the financial means to clean them up. 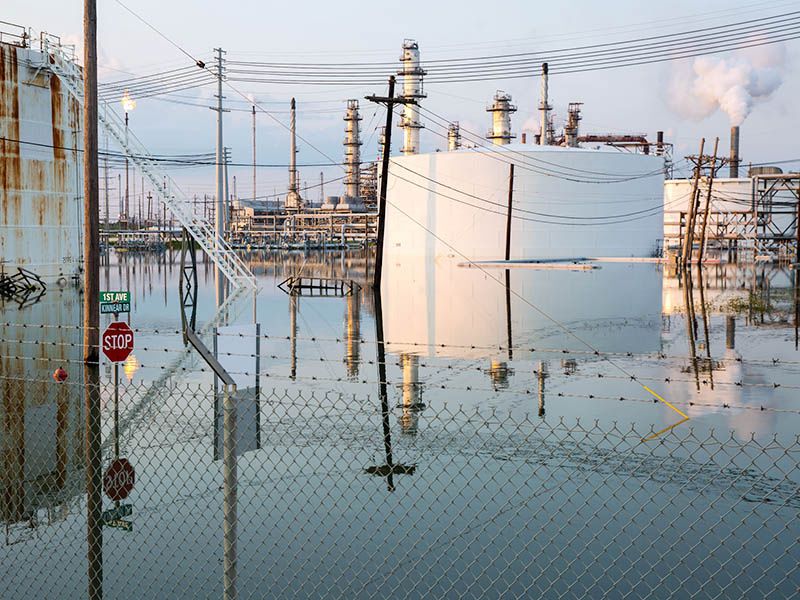 The Motiva oil refinery in Port Arthur, TX, was shut down due to floods caused by Hurricane Harvey. Many similar hazardous sites in Florida are now in danger of flooding due to Hurricane Irma.Alex Glostrum / Louisiana Bucket Brigade

Some simple safeguards—again resisted by industry and their allies—would lessen the danger from a particular type of waste site: coal ash ponds. These contain a slurry of heavy metals left over from burning coal at power plants, and most of the oldest and most vulnerable ponds are clustered in the southeastern U.S. This toxic waste has contaminated more than 200 sites throughout the nation, and coal ash represents the second largest toxic waste stream in the country

Contamination from coal ash could easily have been prevented with sensible safeguards such as phasing out leak-prone ash ponds and requiring the use of synthetic liners and leachate collection systems. Yet coal ash was not subject to federal regulation until 2015, so most coal ash ponds and landfills do not have basic protections. The EPA established federal safety standards only as a result of an Earthjustice lawsuit in 2012.

In Puerto Rico, the AES coal-fired power plant disposes of its waste in another dangerous form: a five-story-high ash pile. Days before Irma, Puerto Rico’s Environmental Quality Board ordered the operator to cover the ash pile to protect against hurricane-force winds spreading far and wide the toxic dust and contaminated run-off. In Puerto Rico and elsewhere in the U.S., the threats from coal ash exposure are borne disproportionately by low-income communities and communities of color.

Similar betrayals of public safety can be found in the backstory around the Arkema chemical plant explosion in Crosby, Texas.

The first thing to know: Such incidents are not rare. Between 2004 and 2013, more than 2,200 accidents and near-misses—including fires, toxic chemical spills, releases of dangerous air pollutants and other incidents—occurred across the country at facilities handling extremely dangerous chemicals under the EPA’s “Risk Management Program.” The incidents resulted in 59 deaths, more than 17,000 injuries and more than $2 billion in property damage.

The second thing to know: A lot of people are at risk. Some 177 million Americans live in chemical disaster zones, and more than 30 percent of American children attend schools near these facilities. Nearly half a million people had to seek shelter in place or evacuate in response to the incidents from 2004 to 2013.

To decrease the likelihood of these disasters, the EPA under President Obama finalized its proposed Chemical Disaster Rule, which strengthens emergency preparedness and coordination with local first responders. The rule also requires the riskiest chemical facilities, such as petroleum refineries, to assess available safer alternatives and technologies in order to lower the risk of worst case scenarios occurring. Measures like this would have helped prevent the Arkema explosion and would reduce the risk of similar catastrophes when worst-case scenarios arise.

Then last June, the Trump administration, in response to industry pressure, announced that implementation of the rule would be delayed until February 2019. Attorneys for Earthjustice, representing neighborhoods and organizations of concerned citizens from California, Louisiana, Texas, Pennsylvania, Utah and West Virginia have filed a lawsuit challenging the delay of the Chemical Disaster Rule.

It’s too soon to determine the impact of Irma on the 54 Superfund sites in Florida. The storm affected the entire state to varying degrees, however, knocking out power and producing severe flooding.

Among the most vulnerable sites was the Miami Drum Services Superfund site, located over an aquifer providing drinking in west Miami-Dade Country. The Homestead Air Reserve Base Superfund site south of Miami is another threat since only a foot of flooding could contaminate a nearby supermarket and apartments.

Only after the waters recede will the effects of the storm on these dangerous facilities become more apparent. Even then, due to lax reporting standards, regulatory officials and first-responders may not be fully aware of the release of hazardous substances.

More information is emerging on the hurricane’s effects in Texas.

In the wake of Harvey, Houston health officials reported high levels of cancer-causing benzene in the Manchester neighborhood near the Valero Energy refinery. Samples revealed 324 parts per billion of benzene in the air—a level that triggers the use of special breathing equipment for exposed workers under federal safety rules. 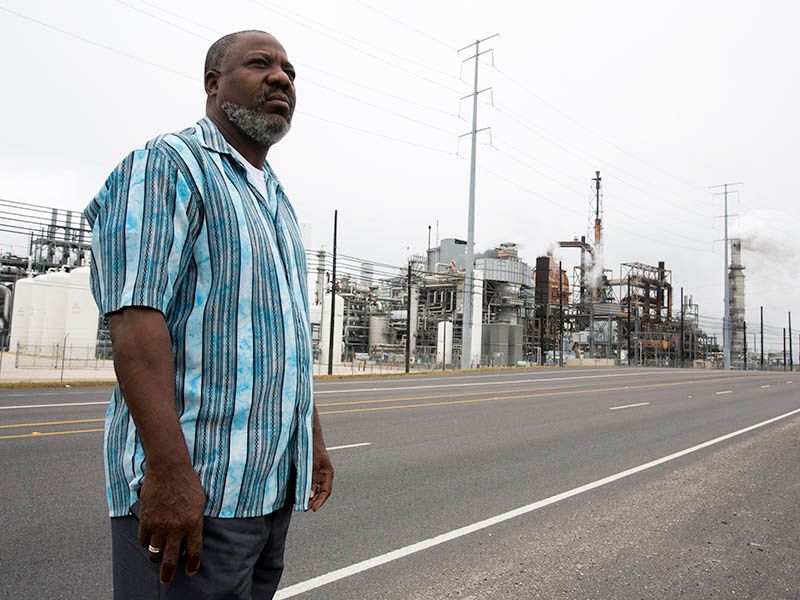 “There’s nowhere for people to go,” said Hilton Kelley, founder and executive director of the Community in Power and Development Association in Port Arthur, Texas. “Conditions here are appalling and people are very disturbed, upset and angry.”

But Kelley and his community are not beaten. “I lost my house and I lost my restaurant, but I’m ready to go to work to hold people accountable.”