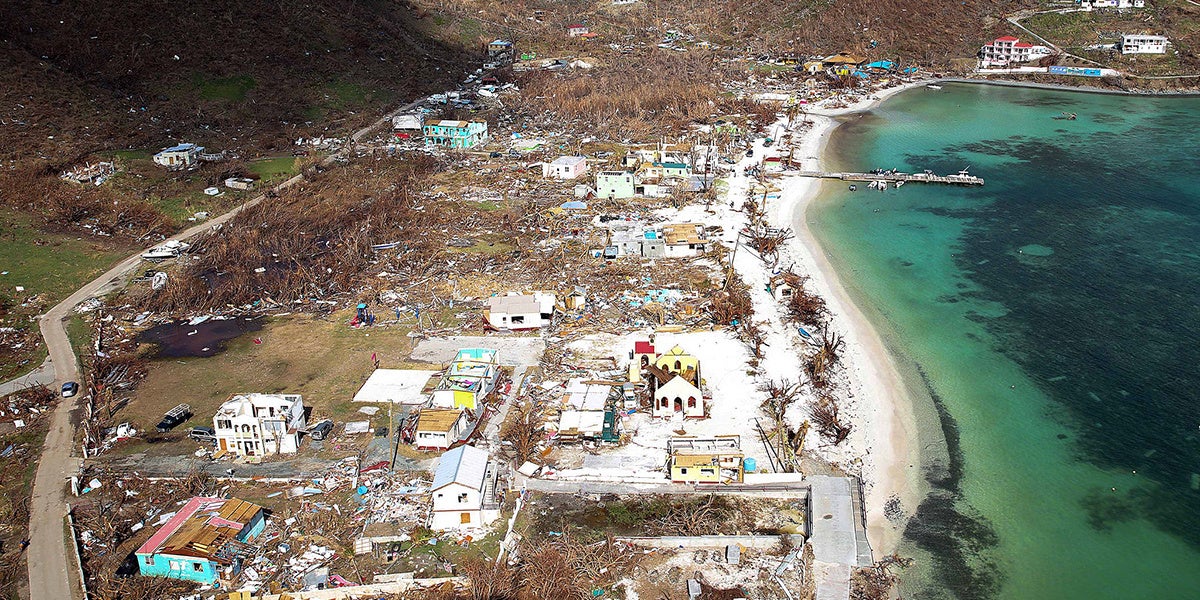 There’s a popular quote often attributed to Mark Twain that was used in a radio ad in the Virgin Islands many years ago: “Everybody talks about the weather, but no one does anything about it….”

It always seemed strangely inappropriate in a place where people seldom talk about the weather, and where blue skies produce picture postcard days and temperatures seldom vary from the mid-80s. In the islands, the saying goes, as in much of the Caribbean, the weather is pretty predictable.

But really, it is not.

Rising sea levels, longer dry spells and erosion of precious beaches are affecting people’s lives and livelihoods. And in her new book, The Irma Diaries: Compelling Survivor Stories from The Virgin Islands, British Virgin Islands author Angela Burnett warns that unless there’s some real movement to curtail greenhouse gas emissions, the series of deadly hurricanes that churned their way through the Caribbean in September 2017 could be a glimpse into a future of unprecedented weather.

“There is a real possibility that a hostile climate could eventually make the islands I have always called and cherished as home uninhabitable,” wrote Burnett, who works as a climate change officer in the British Virgin Islands.

Irma was the most powerful Atlantic Ocean hurricane in recorded history, and it left a trail of destruction and despair across the Caribbean and Florida. The British Virgin Islands, a territory with a population of 36,000, took a direct hit.

The storm killed four, destroyed businesses, eroded beaches, shredded hillside vegetation, flattened homes and left an untold number of people adrift and sickened from the destruction of water and electricity systems. Maria, another Category 5 hurricane, followed two weeks later, grazing the Virgin Islands but devastating the nearby island of Puerto Rico, which had become a staging ground for its Irma-ravaged neighbors.

The hurricanes of 2017 left no one unscathed in the Caribbean islands it touched, and the story of their economic and emotional toll is still unfolding four months later. “Irma was definitely a game changer,” Burnett said. “The BVI is now at a very important crossroad; Irma makes it impossible for us to redevelop without factoring in climate change impacts.”

The Irma Diaries, which Burnett wrote in about two months, tells the story of 25 hurricane survivors, based on her first-hand interviews with a cross section of residents from the four major inhabited islands in the BVI (Tortola, Virgin Gorda, Anegada and Jost Van Dyke).

Their stories—of ripped-off roofs, flying debris, blown-in doors, broken windows, crumbled walls, homes caught afire and overturned vehicles—are horrifying and harrowing, and also at times humorous. But along with the anecdotes on how the people prepared for and survived a storm of a magnitude none of them had ever experienced, many of them talked, unprompted, about the role the changing climate had in shaping these disasters.

They’ve had ample evidence this year alone. Almost exactly a month before Irma, an unusual storm dumped between 8 and 15 inches of rain in various parts of the territory in 24 hours, leading to widespread flash flooding.

One resident, having clearly read Al Gore’s Truth to Power, referred to the “rain bomb,” which is how Gore in his book describes a kind of downpour that might have occurred once in a thousand years, but now occurs quite regularly.

Another person, referring to the hurricane as “Irmageddon,” was outraged that the climate change conversation has not gotten any more prominent in public policy debates. One family that had been planning an expansion of their home is now considering building a concrete bunker instead.

Burnett, 31, gave her book an unofficial launch at the United Nations Climate Change Conference in Bonn, Germany, in November 2017.

Often the youngest person at many of the climate functions she attends, Burnett also authored the climate change adaptation policy for the BVI and conducted a vulnerability assessment for the region’s tourism sector. She also helped to pioneer and develop the new Climate Change Trust Fund, whose board was seated just weeks before Irma hit. The need for such a fund is based on recognition that the U.K.-dependent territory simply doesn’t qualify for most of the big pots of climate change funds available to other countries. From public school classrooms to government cabinets, Burnett has been trying to educate people locally around the importance of climate change adaptation and warning of the likelihood of stronger hurricanes. Still, the strength and ferocity of Irma surprised even her.

“People never act on something unless they care about it first,” she said. “You need to get them to connect to that thing at some level.” With this book, she wants to “put people in the shoes of those who lived this disaster, even if they’re on a small island in the Caribbean. Spending the hurricane with them and going through how they had to save their lives at the hands by this climate-change induced threat I think is a powerful way to start a connection.”

Burnett began writing the book about a month after the hurricane made landfall. She wrote at times in longhand and on many nights she worked by candlelight because many of the homes on the island, including hers, had no power. Many still remain in the dark four months later.

She said was stopped by police many nights for breaking curfew, because she was driving home late from interviews or from the local sewer treatment plant, which had become a refuge because it was one of the few places on the island with power that she could access.

A decade ago, when she first started her work on climate change, many people in the islands didn’t really know what it was or that it had anything to do with them because most of the images associated with it were of melting ice caps and starving polar bears, she said.

While the entire Caribbean contributes very little overall to global emissions, “If you look at our carbon footprint, per capita, we are probably up there with the average citizen of in some developed countries or other countries making significant contributions,” she said. “From a moral perspective we have a responsibility to act. Climate change impacts everything about our future.”

A big part of getting that message across has been to help Virgin Islanders understand how climate change affects them. Talking to primary and high school students, for example, Burnett uses familiar analogies to explain the dynamics of climate. She’s helped stage local debates on climate change and once included a climate change parade float for a colorful cultural festival. She’s done exhibits, streamed Al Gore’s An Inconvenient Truth on movie nights and played short videos in public places where people wait in line, like banks.

“Our climate has been such a steady, unchanging backdrop to life that we often don’t realize how fundamental it is to everything about our existence,” Burnett said. “Adaptation requires a new way of thinking and acting on the part of government, civil society, private sector and individuals.”

In an afterword to Burnett’s book, Michael Taylor, a physics professor at the University of the West Indies’ Mona Campus in Jamaica, wrote that Irma is solid proof of why climate change needs to be taken seriously in the Caribbean. The impact of unprecedented climate is not just erosion of a Caribbean way of life but derailment of Caribbean development, Taylor said.

The setback to economies, many based on tourism and agriculture, will be considerable, he wrote. “In a real sense, Irma portends the future challenge of climate change for the Caribbean region—the challenge of living in a new era likely consistently marked by climatic events only rarely seen to date, or by climatic events that have never been experienced before.”