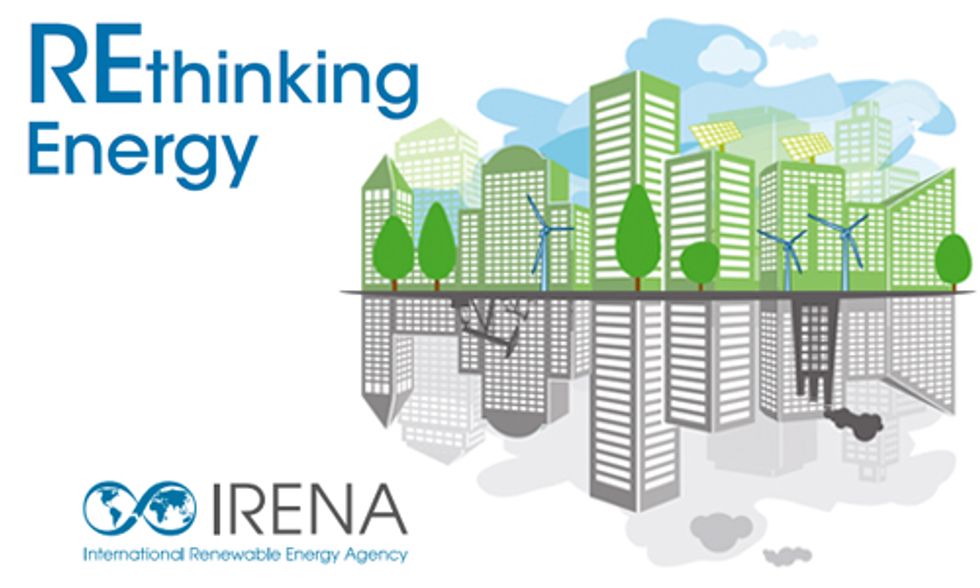 Renewable energies are increasingly seen as the best solution to a growing global population demanding affordable access to electricity while reducing the need for toxic fossil fuels that are creating unsustainable levels of greenhouse gas emissions.

“Rapid technological progress, combined with falling costs, a better understanding of financial risk and a growing appreciation of wider benefits, means that renewable energy is increasingly seen as the answer,” the 94-page report says.

“Not only can renewable energy meet the world’s rising demand, but it can do so more cheaply, while contributing to limiting global warming to under 2 degrees Celsius—the widely cited tipping point for climate change,” the report adds.

“A technology once considered as niche is becoming mainstream. What remains unclear is how long this transition will take, and how well policy makers will handle the change.”

In the next two decades, the report noted, world electricity generation is expected to increase by 70 percent.

But the report warned that there is an environmental cost to producing the required future levels of electricity.

“There is growing consensus on the threat of climate change brought on by increasing atmospheric concentrations of greenhouse gases, prompting worldwide efforts to reduce emissions,” the report said.

“If business continues as usual, these efforts will not succeed. The average emissions intensity of electricity production has barely changed over the past 20 years. Gains from the increasing deployment of renewables, and less intensive fossil fuels such as natural gas, have been offset by less efficient power plants and the rising use of coal. Without a substantial increase in the share of renewables in the mix, climate change mitigation will remain elusive.”

There is also increasing concern about the health impacts of burning fossil fuels, the report said, adding the U.S. Environmental Protection Agency recently found that ill health caused by fossil fuels nationally costs between US $362 billion and $887 billion annually.

In addition, the European Union’s Health and Environment Alliance found that emissions from coal-fired power plants cost up to EUR 42.8 billion in yearly health costs.

“Something has to change,” the report said. “Fossil fuels powered the first industrial revolution, but even in the new era of shale oil and gas, questions remain about their compatibility with sustainable human well-being. The stage is set for the era of modern renewable energy that is cost competitive, mainstream and sustainable.”

The report said renewable energy technologies have grown more robust and more efficient in the last decade and are increasingly able to generate power even in suboptimal conditions such as low wind speeds and low solar irradiation. Energy storage technologies are improving fast, it added, while costs have plummeted.

“Worldwide, renewable power capacity has grown 85 percent over the past 10 years, reaching 1,700 GW in 2013, and renewables today constitute 30 percent of all installed power capacity,” the report said, noting the challenge today is how to finance and accelerate the continued deployment of renewables.

The report added that politicians have an important role to play. “If they make it clear that renewable energy will be a larger part of their national energy mix, and commit to long-term, non-financial support mechanisms, they could reduce uncertainty and attract more investors.”

Deploying renewables also stimulates economic activity, creates jobs, provides power for those left off the grid, the report said. Most renewables do not deplete finite resources and they also reduce the risk of ecological disasters.

“The changes at hand offer the potential for a new industrial revolution—creating a renewables-based system, which enhances access, health and security, creates jobs and safeguards the environment,” the report said. “The technology is ready to deploy. People, businesses and governments must now embrace its potential.”

In an accompanying media release, IRENA Director-General Adnan Amin said speeding up the adoption of renewable energy technologies is the most feasible way of reducing carbon emissions and avoiding catastrophic global warming.

“A convergence of social, economic and environmental forces are transforming the global energy system as we know it,” Amin was quoted as saying. “But if we continue on the path we are currently on and fuel our growing economies with outmoded ways of thinking and acting, we will not be able avoid the most serious impacts of climate change.”