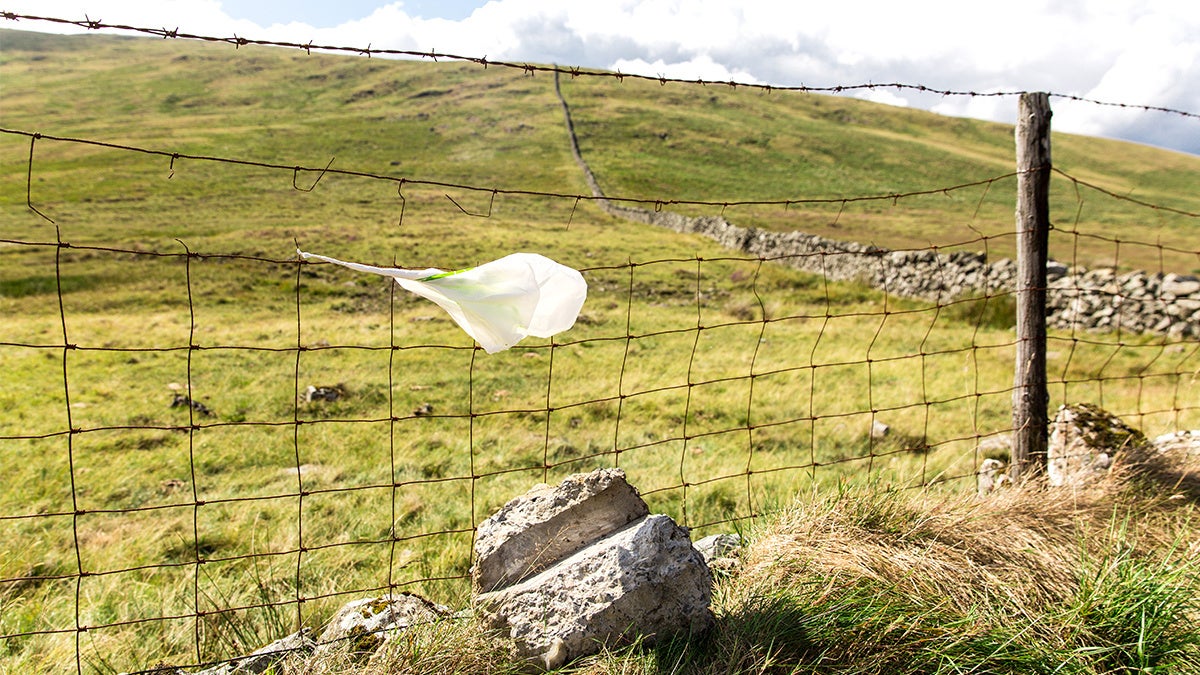 A plastic bag sticks to a wire fence in a remote location in the Mourne Mountains, co Down, Northern Ireland. Dave G Kelly / Moment / Getty Images

Ireland is ready to say goodbye to plastic cutlery, plastic balloon sticks and grocery items wrapped in plastic as a way to drastically reduce the amount of waste in Irish landfills, according to the Ireland’s national broadcaster, RTE.

Speaking at a Waste Summit in Dublin on Monday, the Minister for Communications, Climate Action and Environment Richard Bruton said the government is working on mapping out a plan to ban single-use plastic plates, cutlery, straws, balloon sticks, cotton buds stick, polystyrene cups and food containers, although a fee on the use of such plastics is being discussed as a possible first step, as RTE reported.

Bruton said he would also like to completely end the use of non-recyclable plastic like the crinkly plastic that bags of bell peppers are packaged in, but is first considering charging supermarkets a levy for using it.

“I am determined to step up ambition and put in place strong policy tools to deliver on our new targets,” Bruton said, as The Irish Times reported. “Today is a chance to shape that roadmap. Leadership in this area is crucial if we are to secure a more sustainable, resilient Ireland for future generations.”

The Minister hosted the Waste Summit and met with over 100 key players from industry — local authorities, waste collectors, household representative groups and NGOs — to discuss effective implementation of the climate action policies, according to The Irish Times.

The government strategy goes beyond ending single-use plastic and levies on packaging. It hopes to hit a number of benchmarks, including reducing food waste by half, increasing plastic recycling by 60 percent, doubling the amount of recycled material that is used, and cutting dependence on landfills by 60 percent, as The Journal in Ireland reported.

The European Union has suggested a ban on single-use plastic straws and cutlery for its member states and gave EU countries two years to write the legislation into their national law. There is particular urgency for Ireland, since it is an outlier amongst member states, generating much more waste per capita than the European average. In Ireland, the average person generates over 400 pounds of waste packaging every year, of which 130 pounds is plastic, as The Journal reported.

“Managing our resources properly is crucial to securing a better, more sustainable Ireland for future generations,” said Bruton, according to the Irish Times. “It is central to the Climate Action Plan – 60 per cent of greenhouse gas emissions come from our use of materials.

“All along the supply chain we can do better – 70 percent of food waste is avoidable, half of the material we use is not being segregated properly, two-thirds of plastic used is not on the recycling list and labels are confusing,” he said.