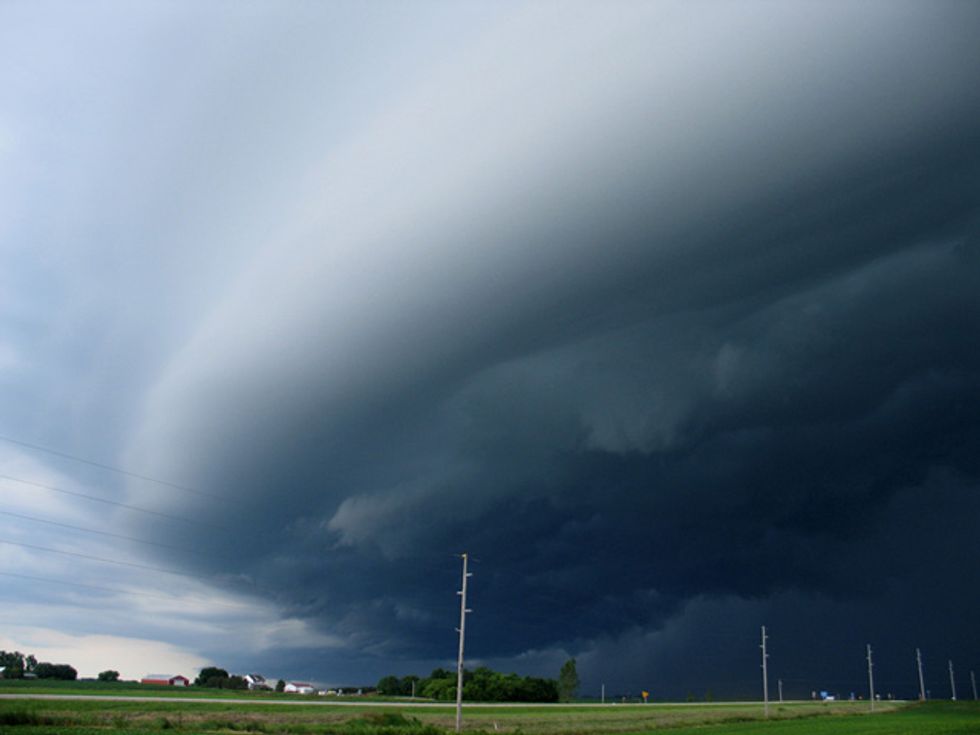 With the Iowa caucus now exactly seven weeks away, more than 30 Iowa scientists are asking political candidates to acknowledge the threats posed by ongoing climate change, particularly to Iowa’s farmers.

“All major scientific societies and the U.S. National Academy of Science have affirmed that the recent rise in greenhouse gases in the global atmosphere has contributed to changes in our climate,” the scientists write in a letter being delivered Nov. 15 to Iowa Gov. Terry Branstad and made available to candidates for local, state and federal office. Additional climate changes will challenge farmers and planners “to maintain the prosperity of our state and its role in national and global food security,” say the scientists.

The statement was drafted by four climate science researchers at Iowa State University, including Prof. Gene Takle, the director of Iowa State’s Climate Science Program. Drake University Prof. David Courard-Hauri organized the scientists from other colleges and universities who signed on to the statement, saying, “This is an issue that all candidates for elected office, from city council to President of the United States, should acknowledge and address through public policy.”

The letter comes less than two months ahead of the Republican presidential field’s first contest, the Iowa caucus. While polls show Republican voters support climate science, most of the GOP presidential candidates have chosen to side with the big polluting Koch brothers against climate science. Of the top GOP contenders, only Jon Huntsman acknowledges climate reality, once tweeting, “To be clear, I believe in evolution and trust scientists on global warming. Call me crazy.” While Newt Gingrich and Mitt Romney previously embraced climate science, both have now disavowed it in hopes of appealing to Tea Party extremists. Ron Paul has veered from cautious skeptic to firm denier. Michele Bachmann, Herman Cain and Rick Santorum all reject climate science outright.

But rather than winning voters over to their side, extreme climate science denial may actually be having the opposite effect, turning some voters into climate science believers. A Reuters/Ipsos poll showed the public’s awareness of climate threats up in recent months. Majorities of Republican voters continue to say the world’s temperature is going up, and that it’s partly or mostly due to human activities.

Following is the letter in full:

The productive soils and favorable climate of Iowa underpin the economy of our State. Over the last half-century our farmers have adapted to changing conditions to keep Iowa ranked as one of the leading agriculture states in the U.S. We take well-earned pride in our contributions to national and global food security.

Changes in rainfall patterns and other climate indicators have emerged as the latest and potentially the most serious challenge to Iowans’ lives and livelihoods. Subtle changes in climate can have large effects on agriculture, making it a sensitive indicator of climate change. Statewide data show changes in temperature, precipitation, and humidity over the last forty years affecting Iowa’s producers. In recent decades a longer growing season, more precipitation, and lack of extreme high daytime temperatures have contributed to improved crop yields in our State. But the accompanying increase in extreme rainfall events, higher humidity, and higher nighttime temperatures have required costly adaptations.

Like its farmers, Iowa’s cities and rural communities, which provide our infrastructure, educational opportunities, and cultural amenities, also have felt the effects of a changing climate. Over the last 40 years intense rainfall has occurred about five times more often than in our previous history. As a result our communities have faced enormous expense to recover from repeated “500-year” floods. Cedar Rapids, Des Moines, Iowa City, and Ames all have suffered multi-million dollar losses from floods since 1993. In 2008 alone, 85 of Iowa’s 99 counties were declared federal disaster areas.

These changes in Iowa’s climate have clear connections to changes in global climate and to changes in how we use the land. As the global climate continues to evolve, our farmers and city planners will face new challenges to maintain the prosperity of our state and its role in national and global food security. All major scientific societies and the US National Academy of Science have affirmed that the recent rise in greenhouse gases in the global atmosphere has contributed to changes in our climate. We urge all candidates for public office at national, state, and local levels to acknowledge the overwhelming balance of evidence for the underpinning causes of climate change, to develop appropriate policy responses, and to develop local and statewide strategies to adapt to near-term changes in climate.

* The views expressed herein are those of the individual signatories, and do not necessarily represent the views of the institutions with which they are affiliated.