Iowans Fight Back Against Factory Farms—So Can You 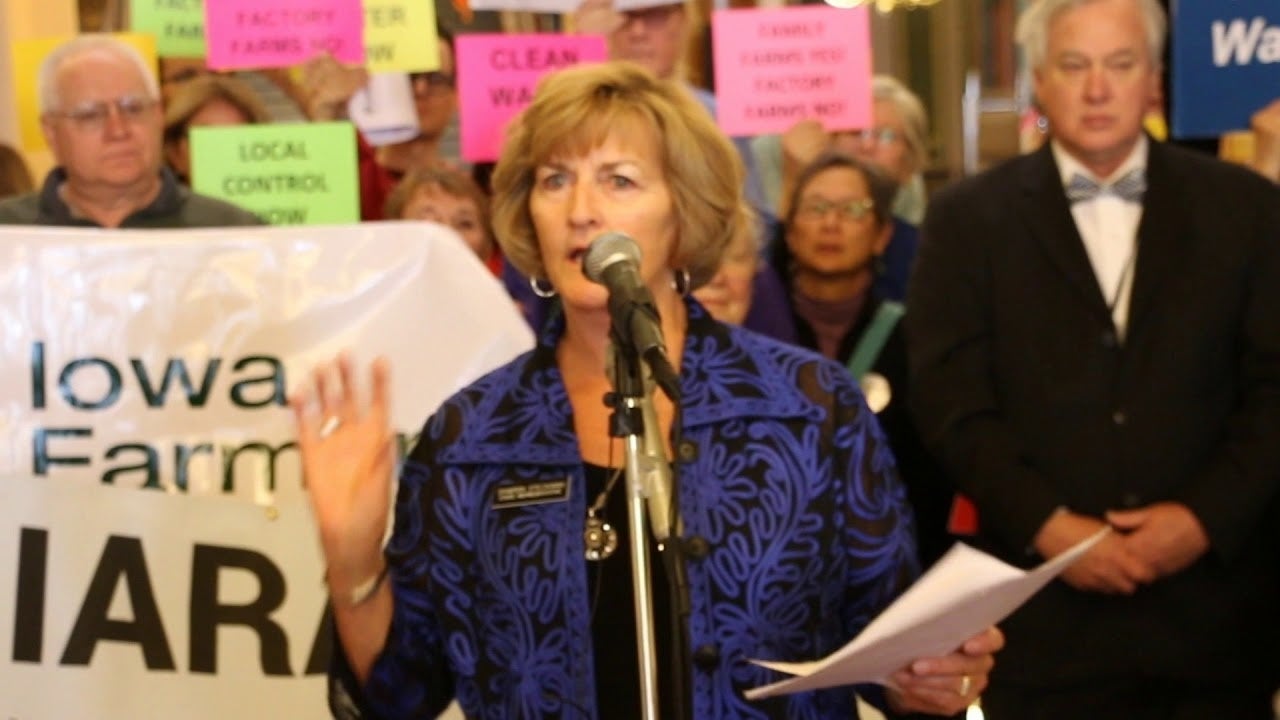 Ready for some inspiration? Check out this video of a press conference that took place earlier this month in Iowa.

The conference begins with the powerful voice of Diane Rosenberg, executive director of Jefferson County Farmers & Neighbors. Jefferson County Farmers & Neighbors is a member of the Iowa Alliance for Responsible Agriculture, a coalition of 27 state, community and national organizations that addresses everything that’s wrong with factory farms, or as Big Ag calls them, confined animal feeding operations (CAFOs).

“We are pro agriculture. We support responsible, respectful and regenerative livestock production that poses no harm to communities and the environment. And we call for a moratorium on new and expanding CAFOs until there are less than 100 water impairments in Iowa. We are here today to support and announce a slate of bills introduced by Sen. David Johnson to close many of the loopholes that weaken protections for people and the environment from factory farms.”

After Rosenberg spoke, a local farmer whose family farm is under threat thanks to two new CAFOs in her neighborhood, explained how her community did everything to stop these factory farms, but “the system in Iowa failed us. The DNR regulations failed us. All we want is clean air and water. We want to continue to live on our family farms.”

After a few more community members shared their personal stories, Iowa state Rep. Sharon Steckman explained how “Iowa has more hogs than North Carolina and Minnesota combined. More than 23 million hogs producing 10 billion gallons of liquid manure a year. That is enough manure to equal what is produced in the UK, France and Canada combined.”

She told the crowd that the state needs to get a handle on Iowa’s water quality and the matrix before any new construction can be considered.

Another speaker spoke passionately of how in a few short years he’s witnessed the loss of 94 percent of independent pig farmers:

“In its place we have explosive growth of industrial feeding operations moving in, which has caused massive health, environmental and quality of life issues across the state and we’re looking at hundreds of thousands, if not millions of hogs, increasing every year. They are saying maybe 30 million by 2020. Enough is enough.”

“We are here today to support Sen. Johnson and Rep. Steckman, and moving forward to protect the waters of this state. Iowa will not be a sacrifice state. We are not guinea pigs for industrial agriculture to continue to practice harmful impacts on our environment. Let’s work together as Iowans to constructively move forward with responsible agriculture to protect our public health and protect our state.”

Inspired? Want to get involved? Want to help Iowans and family farmers in all states where CAFO’s pollute the environment?

“Boycott factory-farm meat, dairy and poultry, i.e. everything that isn’t labeled or marketed as organic or 100% grass-fed or pastured. We need to stop the overconsumption of CAFO meat and animal products in general. Americans consume on the average 10 ounces a day of meat, whereas natural health experts recommend three, none of which should come from factory farms.

“Factory farming, a trillion-dollar industry, is the lynchpin of the GMO industry and the primary driver of deteriorating public health, environmental destruction, water pollution and global warming.”