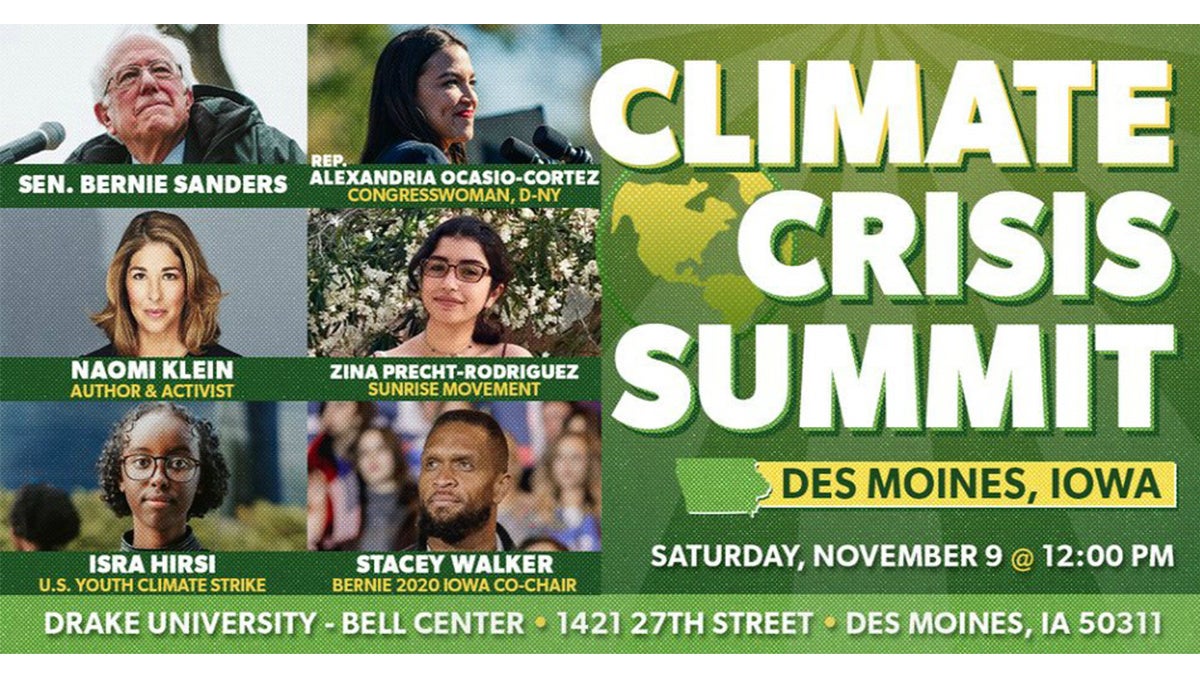 "The climate crisis is an international challenge and we are ready to take it on with a Green New Deal," Sen. Bernie Sanders, a 2020 Democratic presidential candidate, tweeted Monday. Bernie Sanders / Twitter

Author and environmentalist Naomi Klein, U.S. Youth Climate Strike co-founder Isra Hirsi, and Sunrise Movement leader Zina Precht-Rodriguez are among those slated to join Sen. Bernie Sanders and Rep. Alexandria Ocasio-Cortez in Iowa on Saturday for a “Climate Crisis Summit” focused on the urgent need for a Green New Deal.

“The climate crisis is an international challenge and we are ready to take it on with a Green New Deal,” Sanders, a 2020 Democratic presidential candidate, said Monday in a tweet promoting the summit, which is set to take place at Drake University in Des Moines.

The event, as Vox reported Monday, is part of the Sanders campaign’s push to win the Feb. 3 Iowa caucuses with an ambitious climate message and policy platform. In August, Sanders unveiled a sweeping Green New Deal proposal calling for a 10-year mobilization to transition the U.S. economy to 100 percent renewable energy while creating 20 million decent-paying union jobs in the process.

“Sen. Bernie Sanders wants to be the new climate candidate of the 2020 presidential race — and his campaign is betting it can win them Iowa,” Vox reported Monday.

The youth-led Sunrise Movement tweeted in response to Vox’s story that the country has “never seen something like this.”

“In 2020, Green New Deal voters could determine who wins the Iowa caucuses, and from there the presidency,” the group said.

The Sanders campaign said in a statement that the summit on Saturday “is set to be one of the largest gatherings in Iowa to confront climate change.” The event will feature national climate leaders like Hirsi and Precht-Rodriguez as well as local Iowa activists.

“Sen. Sanders probably has the most intensive climate plan on the circuit right now,” Hirsi told Vox. “I think a lot of young people are hearing Sanders’ message and waking up.”

“The climate crisis is everything,” Hirsi added. “It’s healthcare, it’s racial justice, it’s criminal justice — everything. It’s our lives on the line; lives are already being lost because of it.”

The day after the Climate Crisis Summit, Sanders plans to go on a “Green Jobs Tour” across Iowa’s conservative fourth congressional district.

“Climate is typically seen as an issue for young voters but we reject the notion that climate only engages young voters,” Neidhardt told Vox. “We think a strong focus on climate, especially on the economic issues, can really turn the tide.”