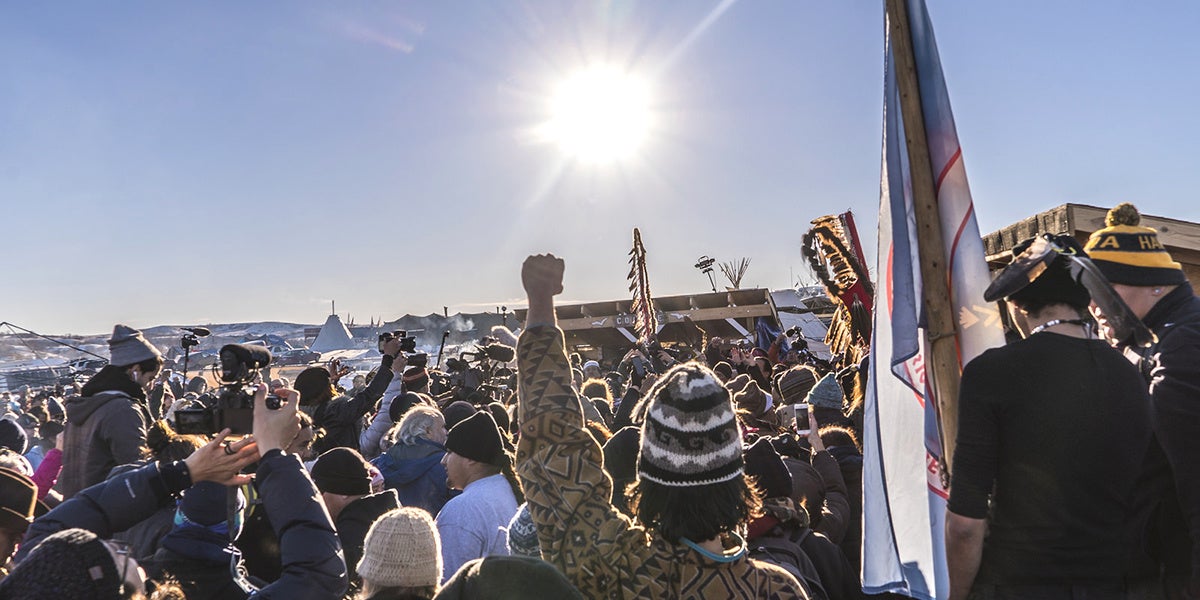 The Iowa Senate has advanced a bill which critics say could lead to the criminalization of pipeline protests, which are being cast as “terrorist activities.” Dakota Access pipeline owner Energy Transfer Partners and other companies have lobbied for the bill, Senate Study Bill 3062, which opens up the possibility of prison time and a hefty fine for those who commit “sabotage” of critical infrastructure, such as oil and gas pipelines.

This bill, carrying a criminal punishment of up to 25 years in prison and $100,000 in fines, resembles the Critical Infrastructure Protection Act, a “model” bill recently passed by the American Legislative Exchange Council (ALEC). That ALEC bill, intended as a template for state and federal legislation, was based on Oklahoma’s HB 1123, which calls for citizens to receive a felony sentencing, $100,000 fine, and/or 10 years in prison if their actions “willfully damage, destroy, vandalize, deface, or tamper with equipment in a critical infrastructure facility.”

According to disclosure records, corporations lobbying for the Iowa bill include not only Energy Transfer Partners, but also Koch Industries, the American Petroleum Institute, Valero Energy, Magellan Midstream and others. The Iowa State Police Association has also come out in support of the bill, while the American Civil Liberties Union of Iowa is against it. The bill has passed out of subcommittee and next goes in front of the state Senate Judiciary Committee.

The bill’s introduction comes as President Donald Trump called for Congress to pass a $1.5 trillion infrastructure bill in his State of the Union Address, which according to a leaked outline of his proposal published by The Washington Post, includes pipelines and would expedite the federal regulatory permitting process for them, largely by simply removing environmental requirements.

State Sen. Jack Shipley (R), one of the Judiciary Subcommittee “yes” votes, told the Des Moines Register that the bill was necessary “as evidenced by terrorist activities on pipelines, many many pipelines.”

Sen. Charles Schneider, who also voted to advance the bill out of subcommittee, is one of two Iowa ALEC state chairs. The other “yes” vote came from Sen. Rich Taylor, a Democrat.

Energy Transfer Partners’ Iowa lobbyist, Jeff Boeyink, formerly served as chief of staff for Iowa Gov. Terry Branstad, who now serves as U.S. Ambassador to China. Branstad was one of ALEC’s key founding members in the 1970s. Energy Transfer in the past has funded ALEC meetings, though it is not clear if they are a current donor, as ALEC does not list funders on its website, nor does it make public who sponsors its meetings.

Boeyink told the Des Moines Register that he believes Energy Transfer Partners is the “poster child” showing the bill’s necessity, alluding to the months-long protests which erupted against the Dakota Access pipeline in both North Dakota and Iowa. But one of the leading opponents of the bill, Bold Iowa, has come out against the legislation and sees it as overreach.

“This latest attempt by Big Oil to silence dissent is no surprise,” Ed Fallon, director of Bold Iowa, said in a press release about the bill. “This is legislative extremism at its worst. The bill’s backers want you to believe this is about cracking down on arson and vandalism. But the hundreds of pipeline protesters who were peaceful, nonviolent and didn’t engage in property destruction could be accused of interrupting service under this bill and subject to insane consequences.”

The director of ALEC’s Energy, Environment, and Agriculture Task Force, Grant Kidwell, told DeSmog that he expects the model bill could be introduced in other states in the weeks ahead. He also pointed out that it is not only an ALEC model bill, but also one passed at the corporate-funded Council on State Governments.

Before coming to ALEC, Kidwell worked as a senior policy analyst for Americans for Prosperity, the lobbying, advocacy and electioneering group funded and founded by money from the Koch Family Foundations and Koch Industries.

Members of the Iowa-based lobbying teams for the bill, representing Koch Industries and Energy Transfer Partners, did not respond to a request for comment.