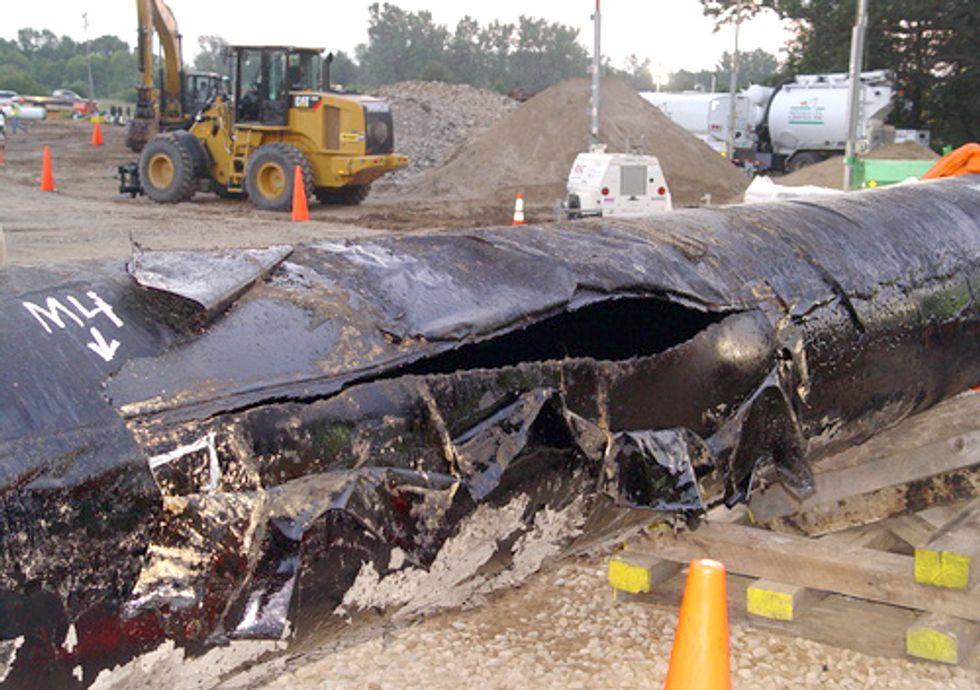 The National Transportation Safety Board (NTSB) heard the major findings of its two year investigation of the Enbridge tar sands pipeline spill, which released more than a million gallons of corrosive tar sands into the Kalamazoo River watershed in July 2010.

The Kalamazoo spill has clearly demonstrated how dirty and dangerous tar sands pipelines are even more dangerous than conventional oil pipelines. Nearly two years after what has become the most expensive pipeline disaster in U.S. history, emergency responders are still struggling to clean up the Kalamazoo River.

"Delegating too much authority to the regulated is tantamount to letting the fox guard the hen house," said Deborah Hersman, chair of NTSB.

NTSB’s report shows in glaring detail that the $807 million tar sands spill was the result of Enbridge taking advantage of weak pipeline safety regulations and poor oversight by federal pipeline safety regulators at the Pipeline and Hazardous Safety Materials Administration (PHMSA). Enbridge failed to identify multiple risks to pipeline safety, failed to properly identify the spill and lacked the resources or planning to mitigate the spill. NTSB staff found that the Kalamazoo spill could and should have addressed the causes of the Kalamazoo spill proactively.

Perhaps of greatest concern are the causes of the Kalamazoo tar sands spill point to a systemic lack of a culture of safety in the pipeline industry and a failure of safety oversight by regulators at PHMSA. NTSB’s findings highlight the urgency to address the general failures in the nation’s pipeline safety system and to proactively address the risks of tar sands pipelines.

While NTSB did not specifically address ways in which the unique risks of tar sands contributed to the spill and the severity of its impact, the panel presented several conclusions which implicated tar sands:

NTSB made 19 recommendations for DOT, PHMSA, Enrbidge and spill responders. As the agency concluded, pipeline safety should be more than a slogan. The Kalamazoo tar sands spill was the result of multiple mistakes made by Enbridge, but federal regulators are also culpable. Both federal regulators and the pipeline industry have too often treated this issue as a public relations issue prior to spills and disaster management afterward.

There is a better way—one that requires strong, clearly outlined regulations and a pipeline safety agency focused on preventing spills rather than responding to them.