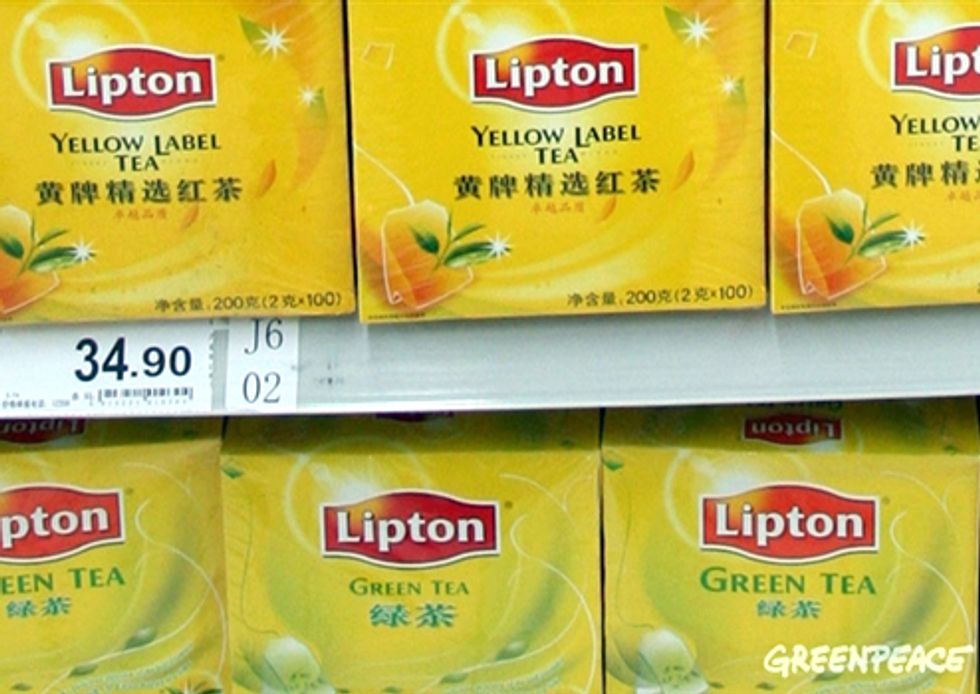 “This was a random selection of Lipton products from the Chinese market, and the results were scary. It also puts a big question mark over the safety of Lipton products in other markets,” said Wang Jing, Greenpeace food and agriculture campaigner.

“As the world’s best-selling tea brand, Lipton is taking advantage of China’s loose pesticide control measures at the expense of its Chinese customers,” added Wang Jing.

Some of the detected pesticides are also banned for use in tea production by the Chinese Ministry of Agriculture, including highly toxic Methomyl, as well as Dicofol and Endosulfan that may affect fertility.

“The results are outrageous. Lipton has committed to minimizing toxic agrochemicals in its products, but it is doing the exact opposite in China. It either had no idea what was being sprayed on its tea farms, or simply didn’t care,” Wang Jing said.

Lipton now joins the shameful ranks of nine top Chinese tea companies whom Greenpeace also found to be selling tea laced with pesticides. A previous Greenpeace report, released on April 11, showed that all 18 tea samples produced by the nine tea brands, when tested, each contained at least three kinds of pesticides.

“It will be a huge shame if Lipton’s global sourcing and marketing systems becomes an umbrella for substandard products,” added Wang Jing.

Greenpeace demands Lipton and other tea companies operating in China drastically reduce the use of pesticides, stop the use of banned and highly toxic pesticides altogether, and establish an effective traceability and supply chain control system that ensures the reduction of pesticide use and its compliance with the law.