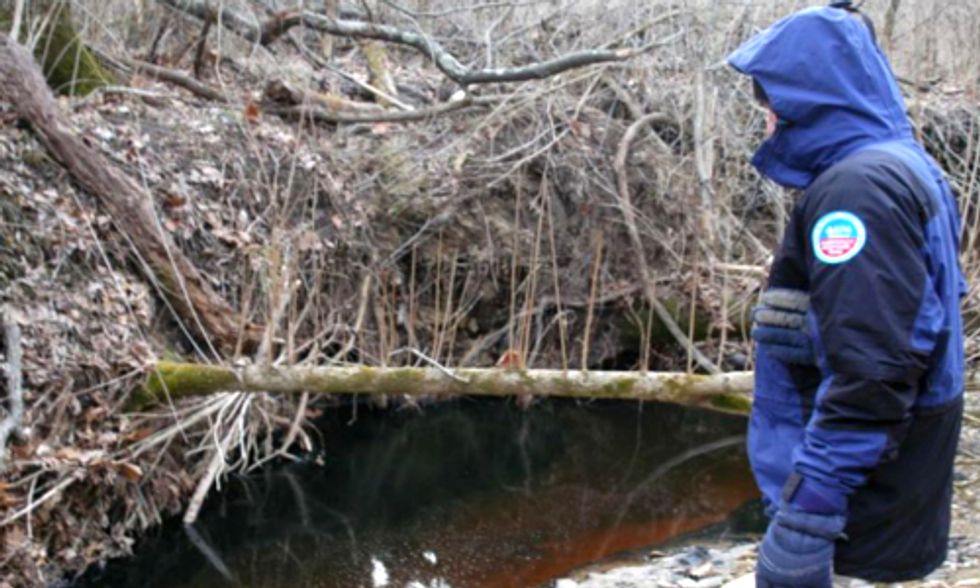 About 240 barrels of crude oil—roughly 10,000 gallons—leaked from a Sunoco pipeline this week, contaminating a large area in the Oak Glen Nature Preserve, near Cincinnati, OH.

Local, state and federal officials reported to the scene Monday evening and contained the leak by about 5 a.m. Tuesday, Cincinnati's WCPO reported. The cause remains under investigation and cleanup could take two weeks.

Crude oil is pictured in a stream near the site of a pipeline leak in Southern Ohio. Photo credit: U.S. Environmental Protection Agency/via RT America

Sunoco Logistics Partners owns most of the Mid-Valley Pipeline Co. pipeline, which extends 1,000 miles from Michigan to Texas. No injuries were reported after the leak, according to the Cincinnati Enquirer.

U.S. Environmental Protection Agency (EPA) spokeswoman Heather Lauer said the crude oil was pooled in a marshland area about the size of a football field, as of Wednesday morning. There are natural barriers that the agency hopes will prevent it from seeping into the Great Miami River, which is just 150 meters away.

While some authorities say the leak is unlikely to affect drinking water in the area, the EPA is investigating and trying to ensure that the underground pipe's oil has not leaked into the ground water supply. In addition to the Great Miami River, water treatment plants are nearby, upstream in Fairfield, OH and upstream on the Ohio River.

"We do have a drinking well used for drinking on this side of the road that will be sampled in the near future, in addition, the health department has identified up to 70 more locations that will be looking into," the EPA's Steve Renninger told WCPO.

The first cleanup phase will take about a week or so, officials estimated. That includes recovering crude oil and contaminated land using powerful vacuum cleaners and large machinery.

"[An oil spill] could definitely have been worse later in the spring when all of our wildlife is coming out of hibernation," Bob Mason, stewardship manager with Great Parks, said. "Plus now the ground is still hard, still somewhat frozen, so that helps."

The pipeline carries crude oil to refineries in Ohio and Oregon. Inspectors last checked it in 2011. A system-wide inspection of the 1,119-mile-long pipeline five years ago resulted in a $48,700 fine for Sunoco, which did not address corrosion problems in the pipeline.

According to the Enquirer, Gary M. Broughton placed the initial 911 call after taking in a "fuel, oily smell." He got out of his car and saw oil spreading across a pond.