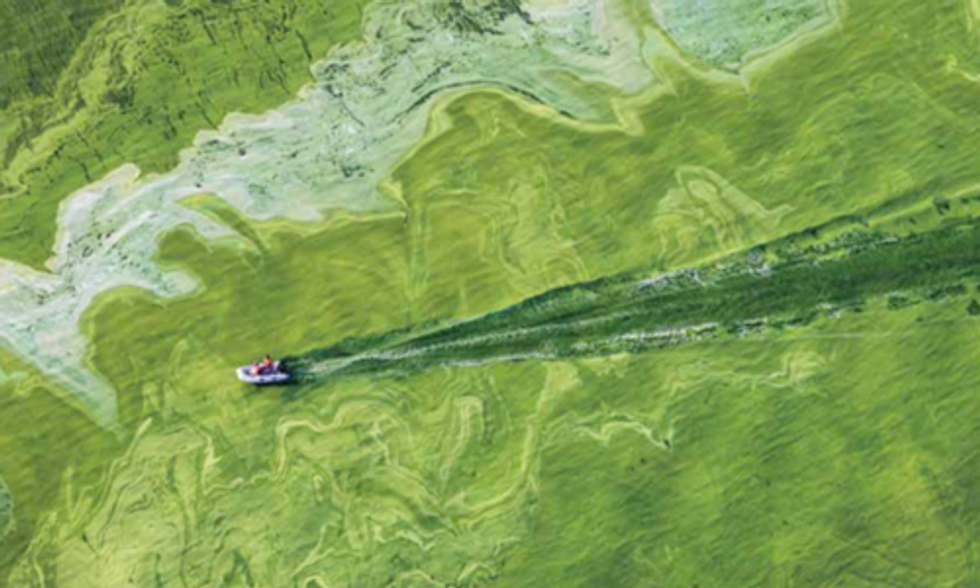 The International Joint Commission (IJC) released a report yesterday urging the states of Ohio and Michigan to declare the waters of the western Lake Erie basin impaired from nutrient pollution. The report, A Balanced Diet for Lake Erie: Reducing Phosphorus Loadings and Harmful Algal Blooms, and its 16 recommendations to help address the challenge of deteriorating water quality in Lake Erie.

The IJC comprises three appointed Commissioners from the U.S. and three from Canada. Their role is to protect the waters that the U.S. and Canada share.

Declaring impairment from nutrient pollution would trigger a Total Daily Maximum Load (TMDL). A nutrient TMDL would determine the maximum amount of nutrients that the western Lake Erie basin can receive along with a reduction plan aimed at meeting water quality standards for cleaner water.

In 2011, Lake Erie experienced a record harmful algal bloom that stretched from the shores of Monroe, MI, past the shores of Cleveland, OH. The toxins within the bloom were 1,000 times higher than what the World Health Organization (WHO) recommends for recreational contact.

2012 did not produce a large harmful algal bloom due to the drought the region experienced, further confirming that weather plays a large part in how large the bloom grows. In 2013, a whole township was unable to drink or bathe in the water coming from the local plant due to toxins 3.5 times higher than what the WHO recommends for safe drinking water.

"So much is at stake, from our economy to human health," said Kristy Meyer, of the Ohio Environmental Council. "The U.S. Environmental Protection Agency and Environment Canada have a duty to residents to develop a TMDL or TMDL-like plan for nutrient reduction and ensure that states and provinces are implementing the plan."

The Maumee River is prioritized in the report as the major contributor to the reoccurring harmful algal blooms in the western Lake Erie basin, providing 43 percent of the nutrient pollution flowing into the lake. Approximately 4.5 million acres of agricultural land drain into the Maumee River before entering into Lake Erie. While federal and Ohio agencies are focusing on the reduction of nutrient pollution in the Maumee River watershed, to date state agencies have not taken a strategic and focused reduction approach. Rather there has been a buck shot approach to implementing best management practices on agricultural lands.

"There seems to be this mystical Ohio/Michigan/Ontario line in the water when it comes to the research, with little understanding of how sources from Ohio, Michigan, Indiana and Ontario collectively play a role," said Sandy Bihn, executive director of the Lake Erie Waterkeeper. "A western basin TMDL would require consideration of waters in Ohio and Michigan, with cooperation from Ontario. The TMDL also would determine the quantity and source of the nutrient pollution, which includes agriculture, manure, wastewater and stormwater runoff."

The report also calls out the need to better understand how the placement of dredged sediments from the Toledo Harbor into the open waters of Lake Erie exacerbates the harmful algal blooms. Each year the U.S. Army Corps of Engineers dredges approximately two Empire State Buildings full of sediment from the Toledo harbor so that tanker ships can utilize the port.

Since the 1980's the Ohio Environmental Protection Agency (EPA) has asserted that this practice lowers water quality. In 2010, the Ohio EPA sent a letter to Lt. Colonel Daniel Snead at the Corps Buffalo District calling for the end to a harmful practice that they believed was exacerbating harmful algal blooms and impacting wildlife.

"This has been a continual battle between the Ohio EPA, the people of the state, and the Army Corps," said Meyer. "We want the port to stay open, but we need to stop this harmful practice which reintroduces phosphorus into the water column, amongst other wildlife impacts."

When dredged sediments are dumped into the open waters of Lake Erie, phosphorus becomes resuspended into the water column—the water that spans from the bottom of the lake to the surface of the lake—smothering habitat as it settles out once again.

A couple of years ago the Ohio EPA started to propose rules that would limit open-lake disposal of dredge materials to no more than 50,000 cubic yards, but the U.S. Army Corps of Engineers stated that they would no longer dredge the Toledo Harbor. Not wanting to stop commerce at this port, the Ohio EPA reluctantly gives permission to dump dredged sediments that are contaminated with phosphorus year after year. In 2013, the U.S. Army Corps of Engineers dumped 1.1 million cubic yards of phosphorus laden sediments into the shallow waters of Lake Erie.

"How all of these sources play a role in fueling HABs in Lake Erie is why a TMDL is so badly needed for western Lake Erie," said Meyer. "Each year is like waiting for the loaded gun to fire."